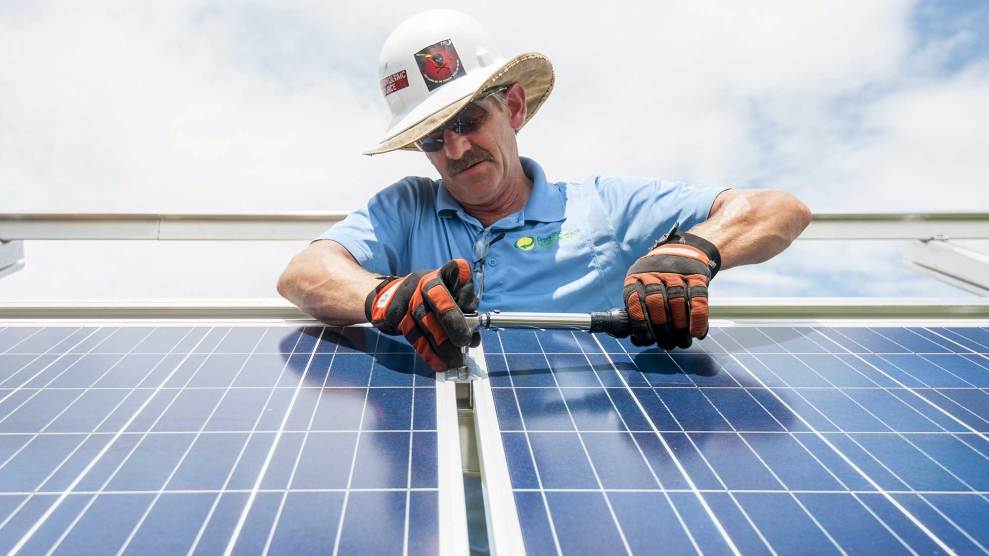 Coal’s decline over the last few decades has left tens of thousands of miners out of work. For Kentucky, where the economy has long revolved around the industry, that meant that only 6,900 people were employed by coal a year ago—the fewest since 1898. Reviving the industry has been one of President Donald Trump’s major talking points, and a month into his term he signed an executive order that would, among other things, lift a moratorium on federal coal leasing.

In Kentucky, only 6,900 people were employed by coal last year—the fewest since 1898.

But one Kentucky coal company sees promise in a different type of energy: solar. Berkeley Energy Group is planning to build a large-scale solar farm on top of a former mountaintop strip mine. BEG has partnered with EDF Renewable Energy to develop the farm, which could produce up to 100 megawatts of energy and could be 10 times bigger than the state’s largest solar farm. This would be the largest project of its kind in Appalachia.

Trump’s narrow focus on coal continues to blind him to the hopeful signs coming from other energy sectors. Jobs in solar power and other forms of renewable energy have been on the rise as alternative fuels start to make sense not just from an environmental perspective, but also from an economic one. In some parts of the globe, solar power costs half as much as coal power. By 2025, that could be the case worldwide, on average, according to Bloomberg New Energy Finance.

Wind power has also emerged as one of coal’s main competitors, breathing new life into struggling rural economies in the Midwest, as I recently wrote about. In the Heartland’s wind belt, wind energy is in some cases cheaper than energy from fossil fuels. Over the past year, the wind industry added jobs nine times faster than the overall economy, according to a new report by the American Wind Energy Association.

Apparently these trends have started to penetrate even the heart of America’s coal country; EDF’s development manager told the Louisville Courier-Journal that the company was “committed to doing all that we can to generate jobs and income in this region” with the proposed solar farm. While Berkeley Energy Group’s project development executive insists that the company is “not looking at this to try and replace coal,” it might be wise to do so: Hell, even the Kentucky Coal Museum has decided to place solar panels on its roof to save on energy costs.