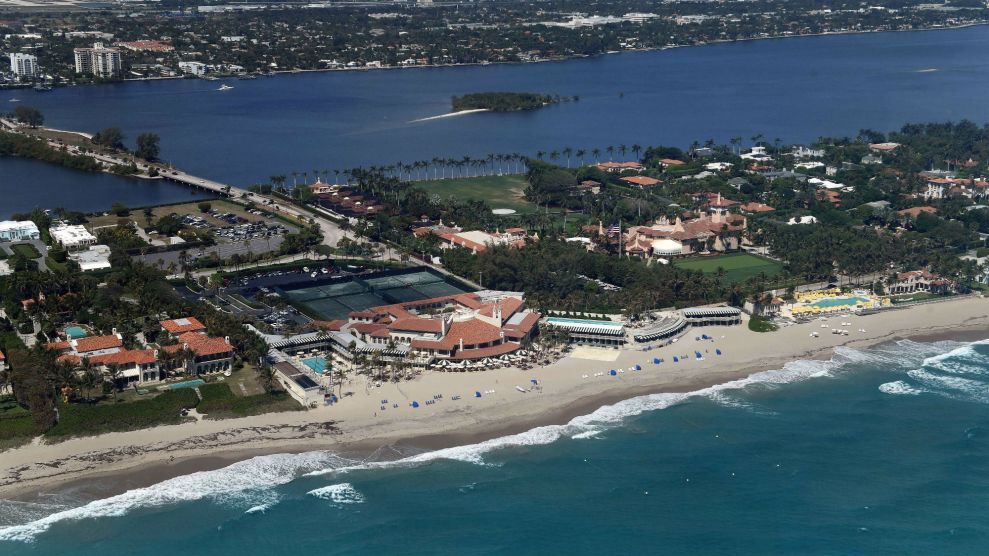 A skeptic of man-made climate change, President Donald Trump would likely shrug at the notion that rising seas could swallow his beloved “Winter White House” at Mar-a-Lago by the end of the century.

Unfortunately for Trump, climate change is not a hoax or a scam. And the president’s denial about what is happening, just feet from his luxury Florida property, doesn’t make the threat any less real.

Trump has chosen Mar-a-Lago as the place to “break the ice” with Chinese President Xi Jinping, as a senior White House official put it during a background briefing Tuesday. Starting Thursday afternoon, Trump will host Xi for a highly anticipated two-day summit. It will be the first face-to-face meeting for the leaders of the world’s two largest economies and biggest emitters of greenhouse gases.

“We’re all counting on these two leaders to take this issue seriously and to take it up at Mar-a-Lago.”

The two have a lot to discuss, including trade tensions and the North Korean nuclear threat, a White House official said. But if Tuesday’s briefing was any indication, climate change—a critical issue on which the U.S. and China recently parted ways—won’t be on the agenda.

Bob Deans of the environmental group Natural Resources Defense Council told the Huffington Post that the summit presents an opportunity for the two countries to strengthen their relationship and “make real progress on the central environmental challenge of our time.” And to walk away from that would be a big mistake.

“We’re all counting on these two leaders to take this issue seriously and to take it up at Mar-a-Lago,” he said.

In many ways, the location is perfect. South Florida, including Palm Beach County, is already taking steps to prepare for the effects of climate change, namely sea level rise. A 6-foot rise, on the high end of possible scenarios that the National Oceanic and Atmospheric Administration has predicted by 2100, would put a significant portion of Trump’s oceanfront resort below the surface.

Under former President Barack Obama, the U.S. and China forged a strong partnership in the fight to combat global climate change. Obama and Xi met at the G20 Summit in Hangzhou, China, last September, where they fortified commitments to reduce carbon emissions by formally joining the Paris Agreement and pledged a “continued bilateral climate cooperation.”

That move, along with India’s ratification of the agreement later that month, proved key to the pact taking effect in November.

Today, the story is strikingly different. Obama ? who believed that “no challenge? poses a greater threat to future generations than climate change” ? has been replaced by a president who has dismissed the phenomenon as “bullshit” and a “hoax” that was “created by and for the Chinese.”

China is forging ahead with efforts to move away from coal and reduce emissions, announcing in January that it will invest $360 billion on renewable energy through 2020.

And where China and the U.S. only months ago found common ground, Trump has chosen to take the country in an opposite, dangerous direction. Since taking office, he has worked feverishly to roll back Obama-era climate policies, and has promised to save America’s dying coal industry, increase oil and gas production and make sweeping cuts at the Environmental Protection Agency that target climate programs.

Meanwhile, China is forging ahead with efforts to move away from coal and reduce emissions, announcing in January that it will invest $360 billion on renewable energy, including solar and wind power, through 2020.

China hasn’t shied away from calling out Trump, both for his Chinese hoax remark and his campaign promise to withdraw the U.S. from the Paris climate pact. At the World Economic Forum’s annual meeting in Davos, Switzerland, in January, Xi stressed that tackling climate change is a responsibility owed to future generations and urged then president-elect Trump to keep the U.S. in the pact, calling it a “hard-won achievement” that “all signatories should stick to.”

Climate change was mentioned only once at Tuesday’s White House briefing about the Trump-Xi summit ? by a journalist, who asked on what the U.S. and China hope to collaborate now that Trump has reversed course on climate. A White House official said that North Korea is something the U.S. and China could work together on and that there are still “a lot of areas of cooperation,” including public health.

Though there are many unanswered questions about the U.S.-China relationship going forward, one thing that’s become increasingly clear is that China looks poised to lead where Trump is choosing not to.

“Since Donald Trump’s election victory, China has emerged as a potential new leader on the global stage—and today’s address does little to soften the impression that President Xi is taking an increasingly assertive stance on matters of global trade and climate change,” the World Economic Forum noted in a press release about Xi’s January address.

Given Trump’s actions since taking office, it is unlikely he or his team members will strike up a conversation about the threats of climate change. Which means that if the two are to have such a discussion, Xi will have to bring it up. The two will need to look no further than out one of the club’s many windows for the proof.

“Today’s address does little to soften the impression that President Xi is taking an increasingly assertive stance on matters of global trade and climate change.”

NASA research shows that global sea levels rose an average of 3 inches between 1992 and 2015. And a University of Miami study last year found that the rate of sea level rise in South Florida had tripled, to about 3/4 inch a year, over the previous decade.

In 2015, in an effort to better prepare for and minimize the effects, Palm Beach County, where Mar-a-Lago is located, hired a “climate change and sustainability coordinator,” urban land use planner Natalie Schneider.

Harold Wanless, chair of the University of Miami’s geological sciences department, understands the situation facing Florida’s coastal areas well. He has co-signed at least four letters to Trump, Mar-a-Lago or a member of the president’s administration, each stressing the urgent need to accept and combat the realities of climate change. None of the letter signees received a response, he told HuffPost.

Wanless can’t understand how Trump could disregard the evidence.

“This is so real,” he told HuffPost. “And it’s so imminent to begin having serious effects on the stability of our coastal environments and its communities and its people. And it doesn’t matter if somebody believes in it or not, it’s happening. And it’s going to be happening at an accelerated rate.”

In a post Wednesday, Melania Hart, director of China policy at the liberal Center for American Progress, listed climate change among the five issues Trump must handle correctly during the summit. She wrote that she expects Beijing will bring up the issue, if for no other reason than to “needle” the Republican president.

“On this issue, the Trump administration is setting the United States up to be the global bad guy, and that will give China leverage to push back against U.S. initiatives on other issues,” Hart wrote. “If the Trump administration denies climate science or refuses to acknowledge the positive role Beijing is playing, that will undermine Washington’s credibility when it claims to be seriously considering new measures on North Korea or trade.”