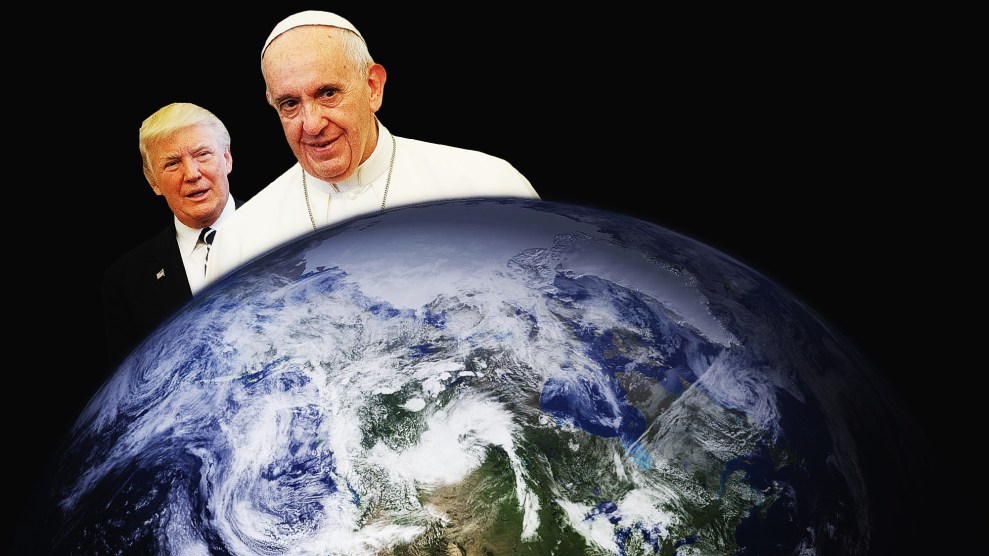 Pope Francis used the opportunity of President Donald Trump’s Vatican visit on Wednesday to urge the United States to stay in the landmark Paris climate accord. It’s a decision the new president has been kicking down the road ever since assuming office, despite a campaign pledge to withdraw from, or “cancel,” US involvement in the deal.

Secretary of State Rex Tillerson, briefing reporters on Air Force One after the meeting, said terrorism and climate change came up. He said the Vatican’s secretary of state raised climate change and encouraged Trump to remain in the Paris agreement.

Tillerson said the President “hasn’t made a final decision,” and likely will not until “after we get home.”

My colleague Rebecca Leber has been tracking the White House’s public hemming and hawing over the deal—and the administration factions competing to influence the president’s thinking.

From earlier this month:

We’ve heard for months that Trump’s Cabinet is split on what to do about both climate change policy and the Paris agreement. Ivanka Trump, now in her official role at the White House, represents those who want to stay. We’re told that she’s “passionate about climate change,” and she is joined by Secretary of State Rex Tillerson and economic adviser Gary Cohn, who are also in favor of staying in the Paris agreement. Energy Secretary Rick Perry wants to “renegotiate.” Secretary of Defense James Mattis sees climate change as a national security threat and likely favors staying involved, as does Trump’s son-in-law, Jared Kushner.

On the other side of the debate, Scott Pruitt is leading the “leave” team, echoing the president in calling the accord a “bad deal.” Team Pruitt also includes senior adviser Steve Bannon and White House Counsel Don McGahn. Attorney General Jeff Sessions has not publicly weighed in, but he opposed the deal as a senator.

During the Vatican meeting on Wednesday, the Pope gave Trump a copy of his influential 2015 “encyclical” on climate change, in which Francis warned that “the Earth, our home, is beginning to look more and more like an immense pile of filth.”

According to pool reports, Trump promised the leader of the world’s Catholics, “Well, I’ll be reading them.” But the official White House readout of the president’s meeting sent to reporters made no mention of climate change.