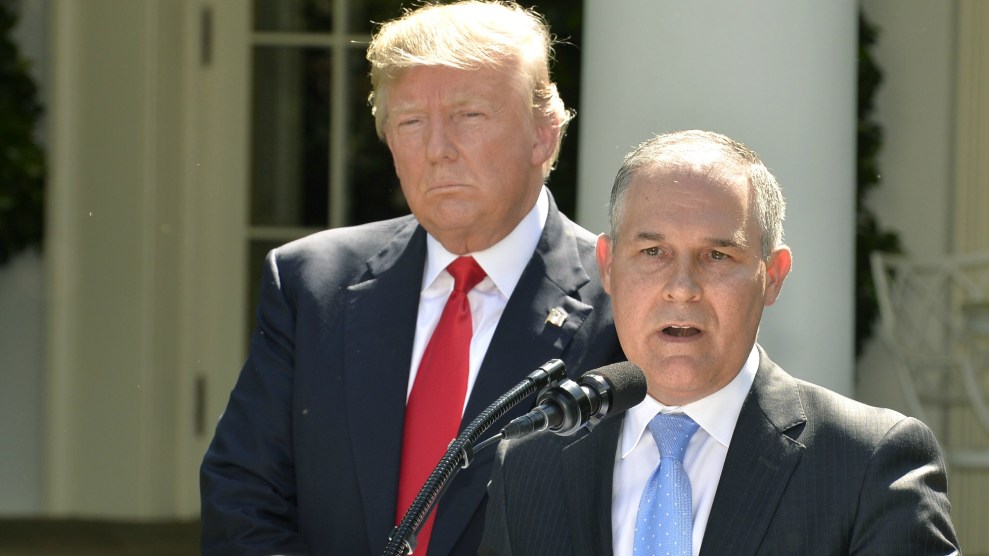 If President Donald Trump gets what he has asked for in his budget request, the Environmental Protection Agency will be in the worst shape of its entire 47-year history. Trump’s budget would eliminate more than 50 EPA programs, cut the agency’s scientific research by nearly half, and decimate environmental enforcement and grants to states and tribes. In all, the proposal would eliminate $2.6 billion in EPA spending, which amounts to roughly 31 percent of the agency’s annual expenditures.

But there is a limited silver lining in all this. Trump’s budget is so extreme that it has prompted some GOP lawmakers to speak up in defense of the EPA. That became apparent Thursday when EPA chief Scott Pruitt appeared before a House appropriations subcommittee to deliver his first defense of the budget cuts. Several Republicans had an unexpected reply to Pruitt’s testimony: You’re going to get more than you’ve asked for.

“You may be the first person to get more than you asked for, because…nobody is standing on the rooftops begging for dirty water and dirty air and dirty soil.”

“You may be the first person to get more than you asked for, because, quite frankly, as many people have made the point, nobody is standing on the rooftops begging for dirty water and dirty air and dirty soil and those sort of things,” Rep. Mark Amodei (R-Nevada) told Pruitt during the hearing.

Amodei also echoed an argument made by some former EPA staffers, who have pointed out that the agency was already stretched thin during the Obama years when it was operating with a smaller budget than in the past. “Congress has cut the agency quite a bit before you got there, and quite a bit recently in relative terms,” Amodei said.

Throughout the hearing, Pruitt avoided wading into the Trump administration’s usual ideological arguments about how the EPA kills jobs or harms economic growth. Instead, whenever the Republicans and Democrats questioned him about proposed budget cuts affecting their districts, Pruitt acknowledged that the issue was an important one and insisted that the EPA would still fulfill its obligations—even in some cases where Trump has proposed entirely eliminating the relevant office or program.

It was Rep. David Joyce, a Republican from Ohio, who noted the contradiction in what Pruitt was saying. Joyce spoke out in defense of the EPA’s Great Lakes restoration program, which Trump’s budget zeroes out. The budget “appears to largely remove the federal government as a partner in all our Great Lakes,” Joyce said. “I view it as a national treasure,” he added, before asking if Pruitt thinks it’s “fair to expect states and local communities to shoulder the burden of caring for them.”

Pruitt’s responded that the federal “leadership role is important as well and it will continue,” though he didn’t quite articulate how that would be possible if the program was eliminated. “We view those states as partners and stakeholders and will continue to view them in that fashion as we go forward,” Pruitt insisted. “It’s important we show leadership but work with each of the stakeholders to achieve the good outcomes.”

On a few other occasions, Republicans reminded Pruitt which branch of government ultimately writes appropriations bills, hinting that the administration wouldn’t get its way. Rep. Rodney Frelinghuysen (R-N.J.) noted that “the power of the purse is here on Capitol Hill.” Frelinghuysen was upset with the roughly 30 percent cuts proposed for the Superfund program, which would affect the more than 100 hazardous waste sites in New Jersey.

Rep. Tom Cole (R-Okla.) expressed concern over the budget zeroing out several tribal environmental grants and programs. “There’s a big difference between states and localities that have taxing powers and Indian tribes that don’t,” Cole said, explaining that it would be difficult for tribal government to fill the vacuum left by the EPA.

Rep. Kevin Calvert (R-Calif.) used his time to question Pruitt on whether he’d continue to honor California’s waiver allowing the state to pursue tougher greenhouse gas standards for motor vehicles. The auto industry and some conservatives have pressed the Trump administration to rescind California’s waiver, but Pruitt said it was not currently under review. Calvert also criticized a line in the budget that would eliminate a program for reducing diesel emissions.

Despite the Republican criticism, many EPA programs remain as vulnerable as ever, especially as Pruitt pursues employee buyouts well ahead of any vote on the new budget. It’s actually one of the few areas where Trump’s budget asks for more funds for the EPA: specifically, $68 million for a program called “workforce reshaping.”