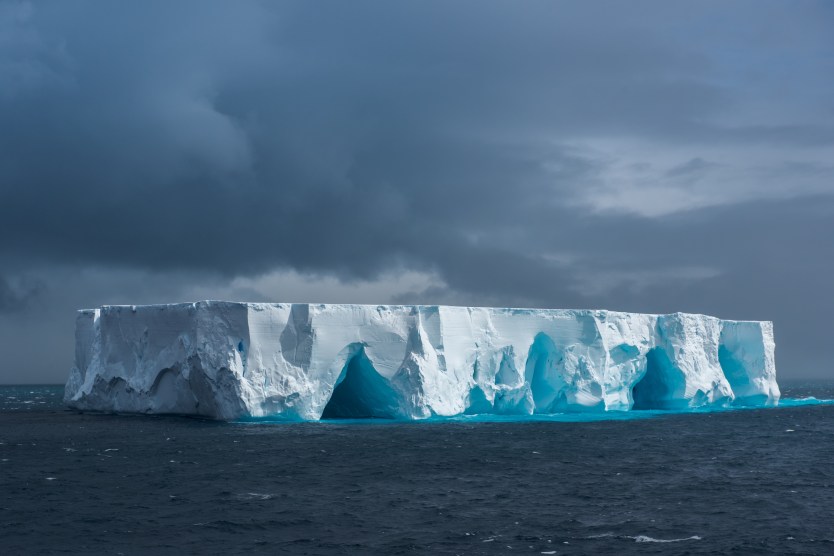 One of the largest icebergs ever recorded is about to break off an Antarctic ice shelf and float away. The separation of roughly 10 percent of the Antarctic Peninsula’s Larsen C ice shelf—equivalent in size to the state of Delaware—from the main body is imminent.

The “calving” event, as scientists call the break, will take place within “days, hours or weeks,” the MIDAS Project predicted on Wednesday. A UK-based Antarctic research project, MIDAS investigates the effects of a warming climate on Larsen C and has been monitoring the growth of this major rift in the shelf.

The soon-to-be iceberg, which it’s only called once it completely breaks off, is still attached to the ice shelf but moving faster than ever, tripling in speed to more than 10 meters, or about 33 feet, per day between Saturday and Tuesday. Once the iceberg detaches, the remaining ice shelf will be its smallest recorded size.

The event itself will not contribute to sea level rise, since the ice is already in the water. But MIDAS cites one study published in the journal The Cryosphere in 2015 that concluded that the break could pose a significant risk to the stability of the whole ice shelf. If Larsen C were to disintegrate or collapse, as Larsen B (about the size of Rhode Island) did in 2002 and Larsen A did in 1995, it could affect sea levels.

“Ice shelves actually hold back the ice which is on land, [acting] as a cork in bottle,” Jonathan Kingslake, a glaciologist and assistant professor at Columbia University’s earth and environmental science department, tells Newsweek. “If an ice shelf were to disappear, ice on the land would start to flow faster.” Without an ice shelf to block it, an ice sheet could make its way toward water more quickly and contribute to sea level rise. According to a research team from Swansea University in Wales, if all the glaciers blocked by Larsen C ended up in the water, global sea levels would rise about 4 inches.

The break off of an iceberg from an ice shelf is “a very dramatic, visually stunning event,” Kingslake says, but it’s a “natural process which is going on all the time. It just so happens that this is a very large one,” he adds. “There’s no reason to tie this one particularly to human-induced changes.” In other words, the Larsen C “calving” is a larger-scale example of a regularly occurring event, but it’s not qualitatively different. And though it could indirectly lead to sea level rise if it helps galvanize the disintegration of the entire shelf, Kingslake says there’s no consensus that this sequence of events will play out.

There will likely be “loads of headlines saying scientists are worried, but that’s not really right,” Kingslake says. “We’re not worried about this causing anything really catastrophic.”

However, he “would like to use this opportunity to point out that there are parts of Antarctica we are concerned about,” like the Amundsen Sea, he adds. “It’s a delicate balance between fear mongering but also pointing out that there are amazing beautiful phenomena going on. And some of them have implications for sea level rise.”