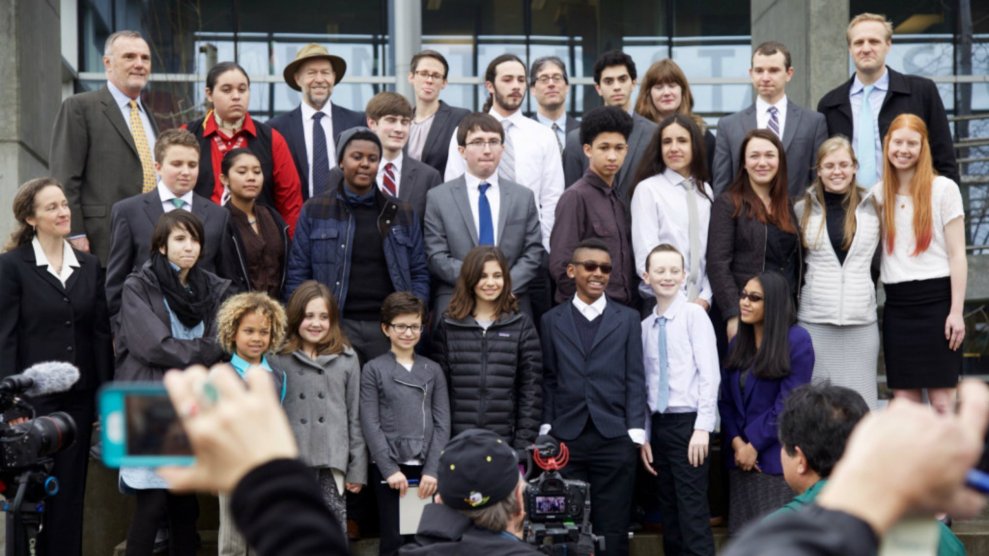 The best shot at large-scale climate action under the Trump administration might lie with a lawsuit set to go to trial early next year.

Juliana v. United States has a plot suitable for a Disney movie: An eclectic group of 21 kids (and their lawyers) fighting to save the world by forcing the federal government to adopt a science-based plan to reduce emissions. Their lawsuit got a boost this past week when climate scientist James Hansen published a paper in support of their cause.

The time may be right for Juliana and other lawsuits like it to gather real momentum, paving the way for meaningful victories, says Michael Burger, executive director of the Sabin Center for Climate Change Law at Columbia University. He says that a “groundswell of litigation” could put “real pressure” on industries and governments to pay for local adaptation projects and make firm commitments to reduce emissions, all within Trump’s first term.

Legal experts say Juliana has helped open a new front in the battle against climate change in the United States and around the world. It’s the culmination of years of legal strategizing by Our Children’s Trust, the advocacy group that helped organize the effort. Our Children’s Trust has brought related suits in all 50 states, as part of a buckshot strategy to get one of them to break through.
“This case is especially crucial in the fight against climate disruption.”

“This case is especially crucial in the fight against climate disruption,” says Kassie Siegel, director of the Center for Biological Diversity’s Climate Law Institute. Cases like Juliana, she says, empower young people to advocate for their rights, and that “drives social change.”

The buzz about Juliana comes amid a flurry of legal challenges to the Trump administration’s efforts to dismantle environmental rules. Just this week, a series of lawsuits were filed in California as a direct challenge to the oil industry on climate change grounds, using a legal theory similar to the landmark tobacco industry lawsuits of the 1990s. The administration’s quest to roll back or reverse pending Obama-era EPA regulations is also getting blocked in the courts.

When it comes to climate change, “so far, the Trump administration is losing more frequently than it’s winning,” says Burger.

At the heart of this suit is the principle of intergenerational equity. In essence, the 21 plaintiffs in Juliana say that the federal government’s refusal to take serious action against climate change unlawfully puts the well-being of current generations ahead of future generations.

This argument might have helped spur legal action abroad, too. Since Juliana was filed in 2015, similar lawsuits have been brought by youth in Pakistan, New Zealand, and India, Burger says.

“Worldwide, there is a great deal of interest in the Juliana case not just because of the practical outcome that it might or might not achieve, but because of what it represents,” he says. “Deeply held values about environmental protection, about intergenerational equity, about the need to address climate change—these things can be linked to specific legal rights embodied in constitutions or in common law.”

“Worldwide, there is a great deal of interest in the Juliana case not just because of the practical outcome that it might or might not achieve, but because of what it represents.”

So far, the courts agree. In November, they scored their first major victory, when a federal district court allowed the suit to go to trial. Judge Ann Aiken set a judicial precedent in her decision, ruling that climate change may pose an unconstitutional burden on younger generations. “I have no doubt that the right to a climate system capable of sustaining human life is fundamental to a free and ordered society,” she wrote.

Late last month, a trial date for the Juliana case was scheduled for next February in Eugene, Oregon. It’s sure to set a dramatic spectacle of the kids and their lawyers on one side of the room against representatives of the Trump administration on the other, with the future of the climate on the line.

In his paper published on Wednesday, Hansen—whose granddaughter Sophie Kivlehan is a plaintiff in the case—presented an updated scientific basis for the suit’s claims. The new study, which has 14 coauthors from around the world, concludes that the burden climate change has placed on younger generations is now so huge that continuing on a high-emissions scenario would cost a minimum of $89 trillion (and as much as $535 trillion) to clean up by the end of this century. And that cleanup job would rely mainly on the still-unproven technology of negative emissions—literally sucking carbon dioxide out of the atmosphere.

Such a burden “unarguably sentences young people to either a massive, implausible cleanup or growing deleterious climate impacts or both,” the paper argues. The best alternative, Hansen says, is a court-ordered mandate to reduce emissions now.

After decades working as a NASA climate scientist and at times being politically pressured into silence, Hansen quit his post in 2013 in part to help build the scientific evidence backing the Juliana case. “It’s hard to solve this politically,” he said on a conference call with the media this week. “That’s why we need to take advantage of the fact that the judiciary is less subject to that pressure.”

To be sure, the ultimate success of Juliana hinges on the composition of the Supreme Court, if the case makes it that far. That fact makes Burger and his colleague, Michael Gerrard, less optimistic. “I can’t foresee a scenario where there are five votes to uphold such a ruling,” says Gerrard. Burger called success in a Supreme Court during Trump’s first term “a near impossibility.”

But victory in the Supreme Court isn’t the only objective for the kids and their lawyers. This is a trailblazing case, designed to pave the way for future success of other cases, too.

“This is strategic impact litigation,” says Burger. “As you can see from the global interest, it’s already had a real impact. It’s starting to shape the conversation about climate change.”