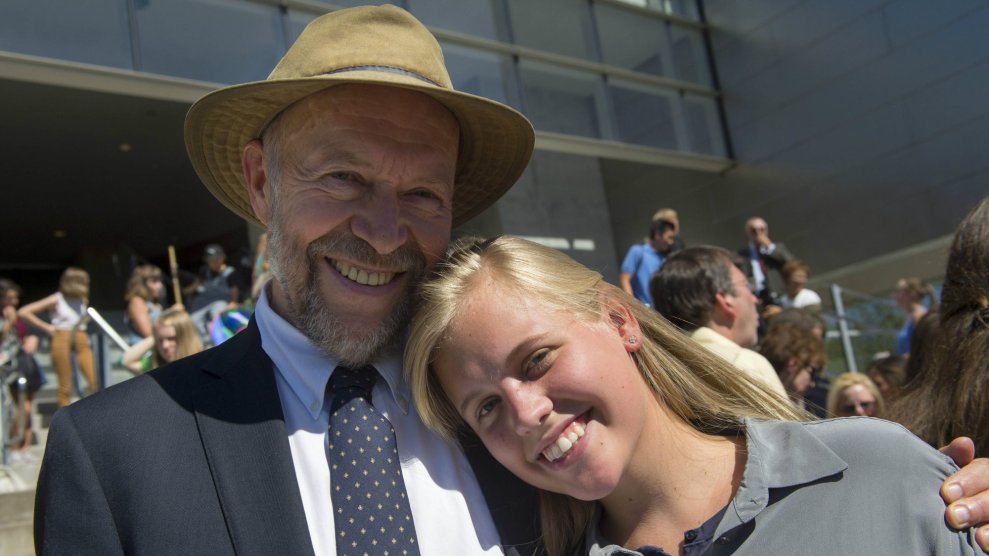 If Sophie Kivlehan’s crusade to convince skeptics that humans are causing climate change has taught her anything, it’s that the surest way to erode doubt is to make the science personal.

The 18-year-old can now point to new research that comes from a very personal source—her grandfather. And she only needs to sway the federal judge overseeing a landmark lawsuit brought by herself and 20 other young Americans to force the U.S. government to slash planet-warming emissions.

“There’s a narrative out there that because of the Paris accord and because solar panels are becoming cheap, we’ve turned the corner on dealing with the climate problem,” Hansen said on a call with reporters. “In fact, what we show…is that the growth rate of these greenhouse gases is actually accelerating in the last several years, so not only do they continue to grow, they grow faster and faster.”

The research compared the currently projected warming of more than 3.6 degrees Fahrenheit, or 2 degrees Celsius, by the end of the century to the only slightly lower global temperatures during the Eemian, an interglacial period that ran from 130,000 to 115,000 years ago. During that time, sea levels surged six to nine meters, or 19 to 30 feet.

At those levels, modern coastal cities would easily be submerged.

To avoid such massive coastal flooding, Hansen argues that the current temperature rise needs to be capped at 1.8 degrees Fahrenheit, or 1 degree Celsius, through aggressive steps such as mass reforestation, widespread use of carbon sequestration technology and radical curtailing of fossil fuel production.

The study gives weight to the lawsuit by 21 kids and young adults who accuse the federal government of violating their constitutional rights to life, liberty and property by promoting fossil fuel production and failing to implement efforts to curb climate change. The suit was filed in 2015 with the help of the Oregon-based nonprofit Our Children’s Trust.

Although it originally targeted the Obama administration, the case is now proceeding against President Donald Trump, whose administration has moved to roll back environmental regulations and bolster oil, gas and coal production.

“We will leave young people in the intractable situation in which climate change is occurring out of their control and costs of trying to maintain a livable planet may become too high to bear.”

“We will leave young people in the intractable situation in which climate change is occurring out of their control and costs of trying to maintain a livable planet may become too high to bear,” Hansen said.

Hansen, who is also a plaintiff in the suit, has a long history of raising the alarm about global warming. He has become a sort of bogeyman among conservative skeptics who dismiss his warnings as “alarmist.”

But his latest report, which he produced with a team of 14 co-authors whose expertise ranges from paleoclimatology to carbon cycles, was tested by three different peer reviewers before being published by the European Geosciences Union.

“The paper should be judged on its scientific merits,” Hansen said. “This is hard science, and it’s been very severely put through the wringer to make sure everything is well justified and clear.”

Its conclusions are also not controversial. The United Nations-brokered Paris Agreement, which was signed by every country but Syria and Nicaragua, urges an ultimate goal of reducing emissions enough to halt warming at an increase of 2.7 degrees Fahrenheit. The official 3.6 degree target was adopted in the spirit of pragmatic compromise. (Trump announced plans to pull the U.S. out of the pact in June, but cannot legally initiate the process for another two years.)

Still, Hansen’s study isn’t aimed at convincing the hard-core doubters who embrace the industry-backed pseudoscience often pushed on right-wing news sites like Breitbart. The paper “is intended to make the human impact on the climate clear to the educated lay person, including judges in court,” Hansen said.

“In particular, our case focuses on putting the best available science in the courtroom to show how our youngest generation and future generations will be burdened by the continued high fossil fuel emissions,” the plaintiffs’ co-lead counsel Phillip Gregory said on the call.