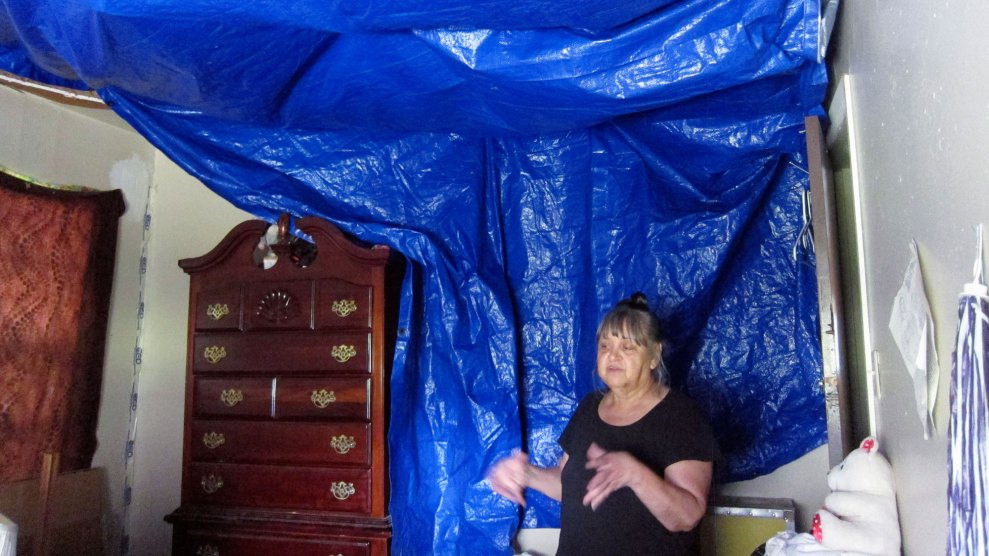 Margaret Gaines stands in front of the blue tarp that covered her Houston home in September of 2016.Juan A. Lozano/AP

Hurricane Harvey has dumped enough rain on Houston and parts of southeast Texas that the National Weather Service has had to change the way it draws maps—the agency’s color-coded scale didn’t go high enough.

#Harvey in perspective. So much rain has fallen, we've had to update the color charts on our graphics in order to effectively map it. pic.twitter.com/Su7x2K1uuz

The storm is already among of the most expensive disasters in American history. And if past recovery efforts in Houston are any indication, the end of the storm will mark the beginning of a costly, time-consuming political fight over what a rebuilding effort will look like and who it will help. Just consider the saga of the blue tarps—a relic of Hurricane Ike, one of the last major storms to hit Houston.

Ike, which swept across southeast Texas in 2008, caused $29 billion of devastation in the Houston area, and its high winds and rain damaged 150,000 homes. In the aftermath, the city distributed thousands of blue tarps to homeowners with damaged roofs. They were intended to be a temporary fix before the owners secured funds for the proper repairs. But years passed and the roofs still weren’t fixed, in part because almost all of the initial $87.2 million pot of federal Ike recovery funding had been spent elsewhere. (This kind of delay had happened before—when Ike hit Houston, some homes still had blue tarps from Hurricane Rita in 2005.) Concerned that low-income residents weren’t getting their share of the pie, the Texas Organizing Project, which was launched in 2009 by alumni of ACORN, decided to get involved. As the Houston Chronicle explained:

The first round of $87.2 million in Ike reconstruction funds had flowed into Houston after the storm and went out fast, mostly to apartment owners, a testament to their political muscle and agile lobbyists, even though there was little correlation between who got recovery funds and how many low-income tenants they served, [founder Ginny Goldman] says.

The second round of $151 million, Goldman and company decided, was going to be different. They wanted the lion’s share to go to low-income single family homeowners with the blue tarps on their roofs. It was a bold stance, to be sure. The only real question, in Houston, with its powerful establishment and lack of organized neighborhood activism: Was it realistic?

It was almost impossible for single-family homeowners to access federal funds after Ike; as of July 2011, just 60 applications for home-repair funding had been approved out of 2,400 applications.

TOP turned the homeowners with blue tarps into a political force. Its organizers went door-to-door in the community. They met with the mayor, Annise Parker. They arranged a bus tour for her housing director to see the unaddressed damage. And they took advantage of Parker’s forthcoming re-election campaign to apply pressure. Finally, in December 2011—more than three years after Ike—they got their money.

But that still didn’t solve the problem entirely. Hundreds of Houstonians still lived under blue tarps, for a variety of reasons. In some cases the damage exceeded the cutoff threshold, meaning the government thought the house couldn’t be saved. Democrat Sylvester Turner campaigned on getting rid of the blue tarps ahead of his 2015 election as mayor, and in the fall of 2016, he began sending inspectors out to neighborhoods to more proactively help residents apply for funds. As of last December, eight years after the storm, 550 Houston homes still had blue tarps for roofs.

Recoveries take time, particularly in places as big as Houston. But as Congress braces for a fight over storm-relief funding, the blue-tarps are a striking reminder of how easy it is for people to be left behind once the eye of the storm, and the spotlight, move elsewhere. The funding for a smooth recovery may be there, but that’s no assurance it will end up in the hands of those who need it most.