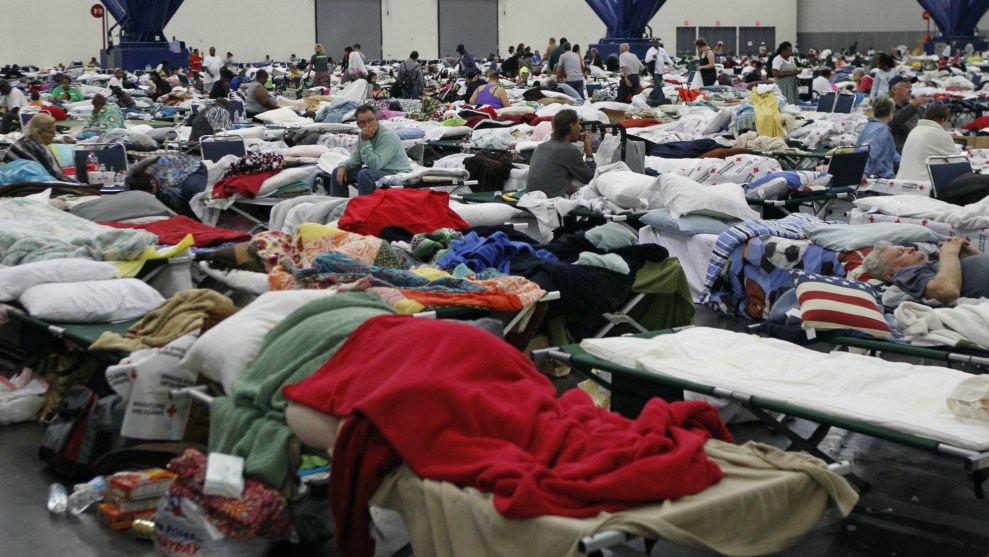 Harvey’s toll is already immense. Thousands are still stranded, and the death toll is 39. Many Houston streets are lakes or raging rivers, and flooded hospitals have had to evacuate. There’s no clean water in some areas, and a chemical explosion about 20 miles from the city has forced even more evacuations. The full extent of the damage won’t be known for weeks, but President Trump has still assured the victims that Congress will move quickly to provide relief.

“Believe me, we will be bigger, better, stronger than ever before,” he said from the White House on Monday. “The rebuilding will begin and in the end it will be something very special.”

But Trump has already undermined the likelihood that Houston will be able to rebuild stronger and smarter than before. Days before Harvey pummeled Texas and Louisiana, Trump signed away the requirement that future building must comply with tougher flood standards that were set by President Obama. That means future building and rebuilding after disasters will be more prone to destruction—not just for unprecedented events like Harvey, but for the everyday kind of inundation that climate change is making more common.

“We’re talking about the ability of people getting rescued. That is the biggest shame of not taking this sort of risk seriously in our infrastructure.”

“You have to ask the question before something like Harvey happens again, and it will: What are we doing to save lives, property, and, frankly, taxpayer dollars,” Rafael Lemaitre, an ex-Federal Emergency Management Agency spokesperson under Obama said in an interview from Houston. “And one thing we can do is encourage communities to adopt higher standards for building.”

In a major storm, the security and responsiveness of hospitals, fire departments, and police stations become even more important. We’ve repeatedly seen that in real-time when disasters strike. But unless these structures are built on higher ground and “to some reasonable standard to withstand floods, you have the potential for massive human suffering,” says R Street Institute’s Ray Lehmann, an insurance and disaster preparedness expert at the conservative think tank. “We’re talking about the ability of people getting rescued. That is the biggest shame of not taking this sort of risk seriously in our infrastructure. Beyond the dollars and cents of it, the ability to respond in a crisis is seriously impaired if this emergency response infrastructure can’t withstand the storm.”

In 1977, President Jimmy Carter signed an executive order requiring that floodplains be built to withstand 100-year flooding. The term 100-year flood is a misnomer, because it only refers to the probability that a flood of a certain magnitude will happen in a given year in a vulnerable area. For 100-year floods, that’s 1 percent, for 500-year floods it’s 0.2 percent. (Initially viewed as a 500-year flood, Harvey is now seen as a 1000-year event.) If it feels as if we’re now experiencing 100-year and 500-year events year after year, that’s because we are—accelerating climate change means the probabilities for these events have shifted. After Superstorm Sandy, the Obama administration reviewed those standards and raised the bar agencies would have to set for regular and critical infrastructure projects requesting federal dollars.

Agencies like the department of Housing and Urban Development, the Army Corps of Engineers, and Federal Emergency Management Agency previously had no uniform standards, but after the new order, they began to craft rules according to the standards laid out by Obama: They could require publicly funded projects in flood-prone areas either to build to two feet above a 100-year flood, build to a 500-year flood, or adhere to climate projections for future flood risk. Critical infrastructure—such as hospitals, evacuation centers, fire stations, and police departments—had to be either three feet higher than the 100-year standard or be able to withstand a 500-year flood. The agencies were still in the process of implementing these new standards when Trump rescinded the order and reverted to the “status quo”—which returned to the out-of-date requirements from the Carter era.

The status quo requires floodplains to look to historical data and be built to withstand 100-year flooding, but not go above it. Accelerating sea level rise and changing, heavier rainfall patterns from climate change means the 100-year flooding model need an update. Houston has seen three 100-year floods this year alone, and three 500-year floods in the past three years. Miami, New Orleans, Tampa, and New York all face similar growing risks.

Cities and states tend to be even less rigorous in imposing uniform building standards, and it is rare for them to account for future climate risk, says former Obama special advisor Alice Hill, who crafted the flood risk executive order. What they do have is often lower than the federal minimum, and another part of the Obama order attempted to raise that bar.

“All of our buildings are built based on assumptions looking to the past,” says Hill, now a Hoover Institution fellow. “Those assumptions are now poor, because of climate change. In the lifespan of the building, [it] changes the risk of everything.”

The White House has defended Trump’s reversal by saying that Obama’s order “were developed without sufficient analysis as to the economic impacts associated with its ultimate implementation.” But federal flood insurance claims are costly, too, costing the US an average $1.9 billion a year since 2006. A White House spokesperson criticized Obama’s order to Newsweek and said that when it was “applied broadly to the whole country,” it left “little room or flexibility for designers to exercise professional judgement or incorporate the particular context of the project setting.”

In most cases, weak federal standards don’t lower the bar set by cities and states, if their flood standards are stricter. But Texas doesn’t have higher standards, generally, and most of Obama’s flood-proofing standards would have surpassed current Houston building codes for public housing and non-critical infrastructure, according to Chad Berginnis of the Association of State Floodplain Managers. Even so, Houston generally has tougher standards than the 1977 order Trump has put back into place.

An aide package from Congress would potentially mean billions of dollars for new construction. Unless the Republican-controlled Congress specifies otherwise, many parts of Texas, including Houston, may end up rebuilding to the lower status quo—thanks to Trump’s executive order, signed a mere 10 days before Harvey reached land.

“Think about it—Federal (taxpayer) investments will be going back to repair facilities at a lesser standard,” Beginnis said in an email. “Doesn’t make a lot of sense.”