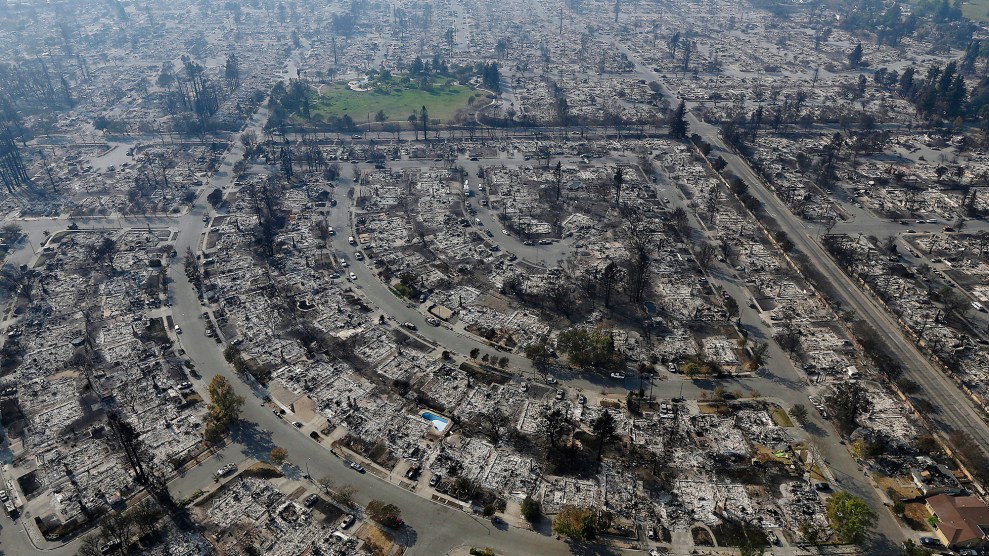 An aerial shot of Santa Rosa, California, after the fireJeff Chiu/AP

Editor’s note: Early Monday morning, Diana Wolfe, 29, evacuated from her Santa Rosa, California, home with her husband just hours before it was consumed in flames. Diana and her brother, Nick Wolfe, 33, who lives nearby, shared their story with Mother Jones.

Nick: Our family moved to the house in 1987, when they built the Mark West Estates neighborhood. We lived there for our whole childhood. Diana still lives there. It’s more than just a house—it’s a whole neighborhood. It’s the schools where you used to play soccer. The stores you used to go to. Everything is torched.

Diana: Sunday evening around 10 p.m. my husband and I could hear sirens every few minutes. So we decided to try to figure out whether there was an accident. Then we found out there was a fire in Calistoga.

I am known to be overly prepared and a bit cautious, so I got out a suitcase and started slowly packing items. I thought maybe we would be evacuated for a week and we would get to go back in. We started packing computer, clothes, important paperwork. We didn’t know if freeways would be closed, so we knew we would need the computer and the internet. And we wanted to stay in touch with family and friends. We grabbed our social security cards and birth certificates and stuff like that. Then my mind started trailing to other things with sentimental value, and we made a list as the fire was creeping closer and closer. At about 11:00, we figured out that the fire was only about five miles away. After all the essentials were packed, I started thinking about the handmade quilt that my mom made me. So that went on the pile.

Nick: For me she grabbed my original San Francisco Giants jacket.

Diana: I tried to grab something for everyone in the family, things that wouldn’t break in the hustle. I grabbed something that belonged to our neighbors, a silver cup party gift from their 25th wedding anniversary. They are like family to us.

The whole packing process took another hour and 20 minutes. Still at that time we heard absolutely no evacuation notices. No emergency warnings on our phones. By that point, 12 or 12:30 a.m., the power had gone out twice, for about 30 seconds to a minute. Then I decided to go for the stuff in my mom’s armoire. Then the power went out for good.

It was like the movie Twister. The wind was blowing everywhere, and there were ashes. It became clear that we needed to run. That was around 1 a.m., when the police officers drove down our road with a loudspeaker and told us to evacuate. It was not a loud announcement. If we had gone to sleep, we would not have heard anything.

So we got in one of our cars and left the other car there. We had intended to take both but the visibility and the amount of people—the sheer terror of what was happening—the thought of getting separated, we couldn’t face that possibility. So we decided to take one car.

We slowly inched forward to the freeway. It probably took us 20 minutes to go three quarters of a mile. Once we got to Rohnert Park there was no more traffic. Right after we got through there they closed that entire freeway. The fire ended up jumping over the freeway.

We drove to San Anselmo to stay with family that night.

We tried to go back the next day, Monday, at around 3 p.m. We heard that the neighborhood was burned, but we didn’t know whether our house was still there. The exit to the freeway was closed, so we had to turn around.

We finally went back on Tuesday. We were able to get off the exit. They still weren’t letting people get near the neighborhood, but my mom walked over, so she took photos.

You imagine that it’s already gone, but you can’t imagine what it looks like. It was just ash. It was completely unrecognizable. The only way to tell whose house was whose was that different houses had different concrete pathways. We saw a curved pathway in one of the photos, so we were like, I guess that one’s our house. Our car was burnt to nothing but a crisp shell. You can’t even tell what color it was.

We moved in when I was six months old. It’s always been my safe place, my home base. I want to be angry at someone but there’s no one to be mad at. It’s just something you have to absorb.

Thankfully we were lucky enough to get ahead of the curve looking for new housing. We bought an apartment in Rohnert Park. We have nothing in it, but we feel really lucky to have a new safe space.

I’m going to miss most the things you can’t just buy at a store. I had a toy box that my father built me.

Nick: I had a desk that my great grandfather built me, and a redwood picnic table that he built from planks from the old Stanford stadium. I hoped it would be in the family for many more years.

I have a very strong sense of geographic identity. I see this neighborhood as a part of my identity. I went to college, and I came back, and I lived there. It really defined my whole life. It was everything from the local grocery store to the parks. I feel like a piece of my identity has been erased. It’s really hard to wrap my head around what it will be like when people rebuild it because it will never be the same. It’s one thing to have lost your house or your personal property, but effectively we lost our whole zip code.