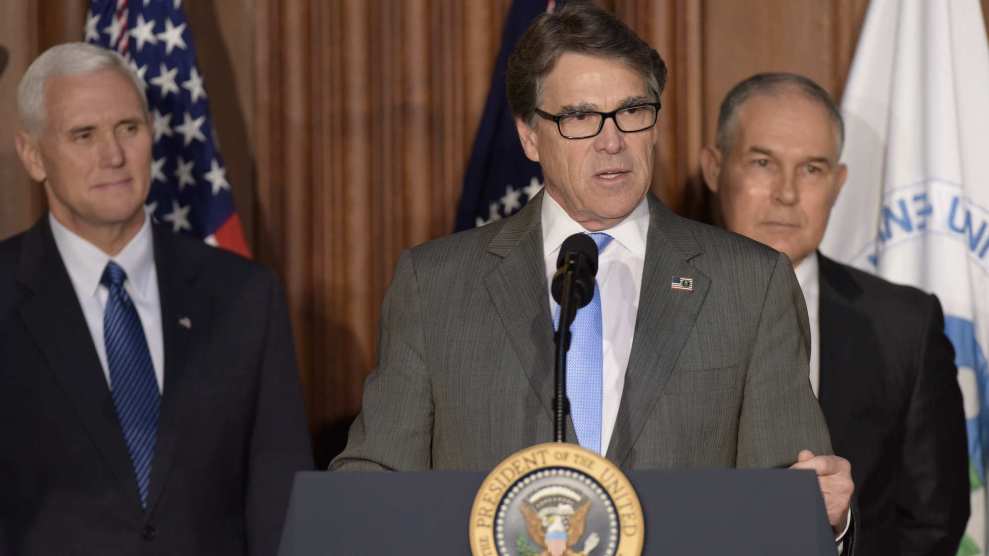 There’s a major controversy brewing over a Trump administration proposal to prop up coal and nuclear in the electricity sector, and it’s up to an independent regulatory agency that doesn’t normally find itself in the spotlight to decide what will happen.

A few weeks ago, Energy Secretary Rick Perry took the unusual step of directing the Federal Energy Regulatory Commission (FERC) to design a rule that allows plants that have fuels stockpiled for 90 days to recover its costs—and this would apply only to coal and nuclear. Perry argues the rule is necessary to ensure a reliable grid. Critics in Congress say it’s a thinly veiled attempt to prop up uncompetitive coal and nuclear, and that Perry is attempting to rush a flawed rule through on an accelerated timeline.

As an independent body, FERC’s commissioners don’t necessarily have to go along with this plan, and they are facing a lot of pressure to reject Perry’s proposal. On Thursday, Senator Ron Wyden (D-Ore.), a member of the Senate Energy and Natural Resources Committee sent a letter to FERC asking to “withdraw this damaging proposed rule in its entirety.”

In his letter to FERC’s secretary Kimberly Bose, Wyden explains his objections. If implemented, “this rule would destroy competitive power markets and raise utility rates for millions of Americans, while doing virtually nothing to improve the reliability of the electricity grid. The administration singled out only one factor—on-site fuel storage—as deserving of extra compensation. However on-site fuel storage would not have helped grid restoration efforts after storms like Hurricanes Harvey, Irma, and Maria.”

Perry set a 60-day deadline for FERC to make its final rule, which Wyden describes as “lightning-fast.” He suggested that the speed of the deadline demonstrates that the administration is “yet again trying to hide its intentions from the people who will be harmed by this rule,” which in this case would be the ratepayers.

The speed of the deadline demonstrates that the administration is “yet again trying to hide its intentions from the people who will be harmed by this rule,” which in this case would be the ratepayers.

Back in April, Perry requested that the Energy Department conduct a study on grid reliability. The study, which came out after a series of delays, did not support Perry’s assertions that renewables and gas posed a serious threat to grid reliability. Nonetheless, the Department of Energy pointed to the study and the power outages from recent extreme weather to justify the accelerated timeline. Citing the recent Hurricanes Harvey, Irma, and Maria, along with Sandy and the Polar Vortex, Perry’s letter to FERC in September claims there’s been an “under-valuation” of a reliable grid that nuclear and coal, in Perry’s opinion, would ensure.

With three of the five FERC seats currently filled, two of the commissioners have already gone public with their skepticism. Robert Powelson, a Trump appointee confirmed in August, has said that “the moment we put our thumbs on the scale is the moment we bastardize the process.” An Obama FERC appointee didn’t think the 60-day deadline was possible. “We’re getting ahead of ourselves because no decision has been made to put that into law,” Cheryl LaFleur told Utility Dive, “but if you did, it would require quite a lot of articulation of how it would work.” They are joined by a group of eight former FERC commissioners, and oil and gas industry and renewables representatives, who strongly oppose the rule. The libertarian R Street Institute has called it a “political monster.”

FERC Chairman Neil Chatterjee, a Trump appointee, is the only commissioner who has indicated he’s “sympathetic” to the proposal.

Contrary to President Trump’s promises, the coal industry is still floundering in the competitive market, so much so that the week the administration officially kickstarted its repeal of the Clean Power Plan, three coal-fired plants announced they will still retire. That hasn’t stopped the administration from pursuing other options to prop up coal so it can compete with renewables and natural gas. A rule like the one Perry is proposing would subsidize coal and nuclear, without factoring in any of the downsides.

In a hearing defending his proposal last week, a senator asked Perry if he had considered the costs of this new rule to consumers. Perry’s didn’t say whether it had come up. “What’s it cost to keep America free?” he replied.  “I’m not sure I want to leave that up to the free market.”