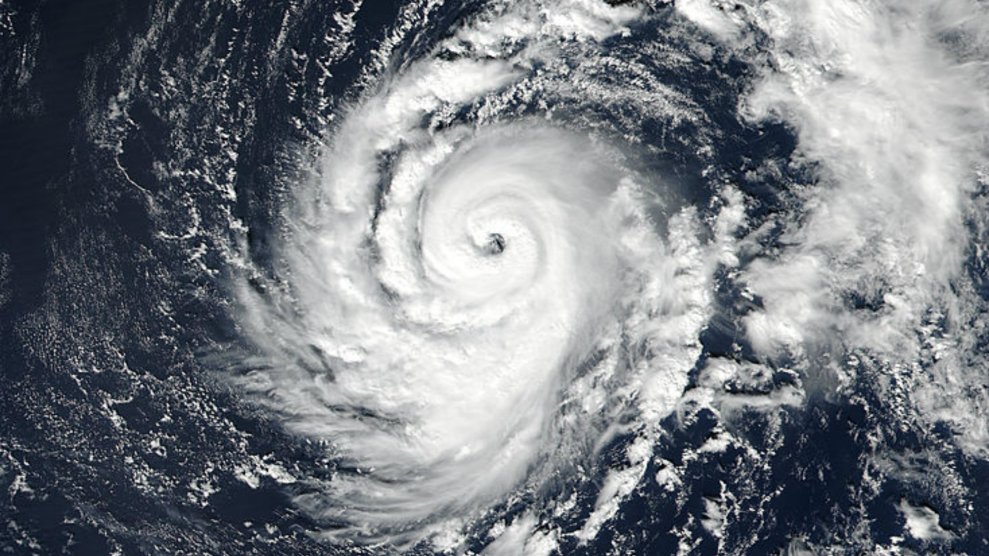 An already unusual hurricane season just got a lot weirder as Tropical Storm Ophelia set her sights on…Ireland and the British Isles. Unaccustomed to such weather, these decidedly not-tropical northern nations are buttoning up, for the first time in recent memory, in the face of the impending storm. Schools are closed, the power is out, and police report at least three people have already been killed in Ireland.

Adding to the sensation that we’re witnessing, the storm has also brought along a literal glitch in the storm tracker maps issued by the National Weather Service. This hurricane, it seems, exists too far outside of the traditional tropical storm boundaries to be automatically mapped. As environmental activist and writer Bill McKibben pointed out on Sunday morning, a forecast of Ophelia’s wind speed probabilities abruptly ended at a latitude of 60 degrees north:

Apparently when they programmed the software they were not imagining tropical storms north of 60 deg latitude pic.twitter.com/y6zu7MLsCK

Michael Brennan, a hurricane specialist with the National Oceanic and Atmospheric Administration, says the graphical glitch shouldn’t worry anyone, but at the same time, he can’t yet explain Ophelia’s strange trajectory. The strange maps are a simple, if somewhat stupefying, result of an old grid: “When you set up a grid, you define boundaries of that grid,” he said. “Whenever that grid was created, it was decided it would cut off at 60 degrees north and just west of 0 degrees longitude.”

Under more normal conditions, the grid allows researchers to analyze probabilities for all tropical cyclones in the Atlantic basin and the eastern, central, and western Pacific basins—a big and important feat. But Ophelia threw a curveball, pushing farther north and farther east than previous storms. Brennan says before this storm hit the edge of the grid, even he didn’t know where its boundaries were.

In response, Brennan’s team set about making a more complete visualization of Ophelia’s path on their own computers. (The group wasn’t able to adjust the supercomputer and its ruptured renderings because that complicated process isn’t actually under their purview. Given multiple groups use the grid, even NOAA can’t just adjust it without warning.) Knowing that comprehensive maps of the storm’s trajectory would prove essential for those in Ophelia’s path, Brennan says, “we were able to change that on the fly.”

While Brennan and his team were able to make the ad-hoc mock-up they needed, ultimately it was just that, a quick fix. They’re still left with a much bigger problem: The fact that no one—and no computer—thought much about a tropical storm traveling this far from the tropics. “That’s a pretty unusual place to have tropical cyclone,” Brennan says. “Maybe that’s something we’ll have to go back and revisit what the boundary is.”

Everything about Ophelia seems unprecedented. Even the Weather Channel seems to have the heebie-jeebies, writing, “Only 15 hurricanes have passed within 200 nautical miles of the Azores [a collection of mid-Atlantic islands] since 1851, according to NOAA’s historical hurricane database.” But for all its hair-raising attribute, it’s still too soon to tell what motivated Ophelia’s unexpected path, though abnormally warm surface water temperatures and a tragically perfect jet stream definitely played major roles. That means that, like most of our unprecedented hurricanes this season, there is a real chance that climate change played a role, though unpacking exactly how strong that role is will take a bit more time. Whether Ophelia proves to be a fluke or a new fixture of our climate-changed Earth, the fact that it’s forced forecasters to reconsider their maps is just another example of how extreme this hurricane season has been.