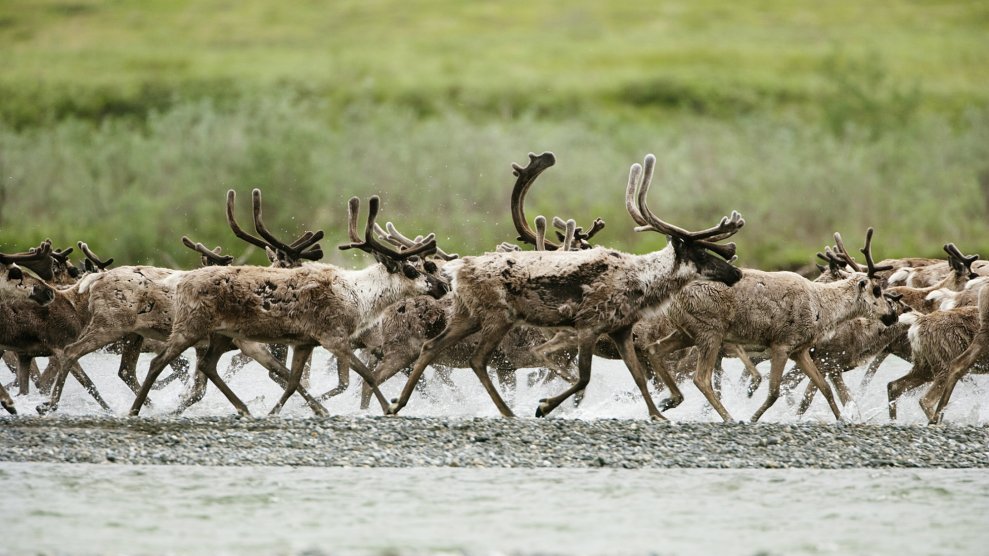 For tribal people in northern Alaska, a Republican tax overhaul that was hastily cobbled together in congressional backrooms 3,000 miles away has raised fears that their entire way of life could be erased from this frigid corner of the US.

The Senate’s tax bill may land a decisive blow in a 30-year environmental battle over the Arctic national wildlife refuge, a vast untrammeled area hailed as America’s Serengeti by conservationists, by finally prising open the wilderness to oil and gas drilling. The region’s Gwich’in people fret that their primary food source, caribou, may be lost, and with it the future of the tribe itself.

“We are fighting for our way of life right now,” said Bernadette Demientieff, the executive director of the Gwich’in steering committee, who is spending the week in Washington DC to frantically plea the tribe’s case to Congress.

“Caribou provide 80% of our food, as well as our clothing. This is a sacred place and we will be wiped out if there is drilling there. We live off the land and this is our garden. Take that away and we starve.”

“This is a sacred place and we will be wiped out if there is drilling there. We live off the land and this is our garden. Take that away and we starve.”

The reliance on hunted food like caribou is practical in an isolated place where a store-bought box of cereal can cost $24. But it is also deeply cultural—the Gwich’in, a community of 9,000 people spread across 15 settlements in Alaska and Canada, revere the animal in song and dance dating back as long as anyone can remember.

The 170,000-strong porcupine caribou herd, named after a river in the heart of a range the size of Wyoming, are hunted along their lengthy migratory route but the Gwich’in steer clear of them once they reach their coastal calving grounds each spring, so they can give birth and feast on lichen, moss and other foliage. More than 40,000 caribou are born each year before they trudge onward along the coast, to avoid the summer mosquitoes.

It’s in this nursery area on the coastal plan of the Arctic refuge, also known as the 1002 zone, that drilling is set to be permitted, with two lease sales for oil and gas to be sold off in the next decade. Scientists, aware of the refuge’s geography, where mountains and foothills press up against the coast, have warned that this narrow corridor could be broken up by new fossil fuel development.

“It’s probably one of the most significant wilderness areas left in the United States, if not North America,” said John Schoen, a wildlife biologist retired from the Alaska department of fish and game.

“If you overlay that narrow band of land with oil development, infrastructure of airfields and gravel roads and pipelines and pump stations, there really isn’t any place for the animals to go.”

As one of the last fragments of intact landscapes in the US, the Arctic refuge supports a riot of life, home to about 40 species of mammal, including the polar bear, and 42 fish species. About 200 types of birds, such as the snowy owl and long-tailed duck, migrate to all 50 states. Such a bounty draws comparison with totemic national parks such as Yellowstone and Yosemite, despite the relative obscurity of the Arctic reserve.

“If you overlay that narrow band of land with oil development, infrastructure of airfields and gravel roads and pipelines and pump stations, there really isn’t any place for the animals to go.”

Within this 19m-acre protected area created by the Eisenhower administration in 1960, the 1.5m-acre coastal plain is an oddity. Despite its importance to the ecosystem, the land, which nestles alongside the Beaufort Sea, wasn’t designated as protected wilderness and it was left to Congress to decide its fate.

Since the 1980s, repeated attempts have been made to open up the area to drilling, as occurs along much of the rest of Alaska’s northern coast. The coastal plain contains America’s “largest unexplored, potentially productive geological onshore basin,” according to the US interior department, with a 1998 assessment estimating that there could be as much as 11.8bn barrels of recoverable oil beneath the plain.

Environmentalists and sympathetic presidents have until now kept this oil underground but a long crusade by Lisa Murkowski, Republican senator from Alaska, to develop the coastal plain now appears to have paid off. Murkowski managed to add the coastal drilling leases into the overall tax bill, with the promise that the sales will bring in $1bn to the state and federal governments and stimulate a struggling local economy.

“Opening the 1002 area and tax reform both stand on their own, but combining them into the same bill, and then successfully passing that bill, makes this a great day to be an Alaskan,” Murkowski said after the Senate vote. She has been staunchly supported by other Alaska Republicans, with the US senator Dan Sullivan calling the prospect of drilling a “decades-long dream” that would be a “win for Alaska and a win for the nation”.

Some Alaskan businesses, particularly in the tourism sector, and a group of House Republicans have raised concerns that the drilling would ruin the image of a pristine wilderness and exacerbate climate change. But it seems unlikely this squeamishness will derail the proposal once the Senate and House tax bills are meshed and sent to Donald Trump’s desk.

Any drilling “would be very disappointing,” said Carlos Curbelo, a Florida Republican who opposed the incursion into the refuge. “But I doubt that I would deny all of my constituents the opportunity to experience tax relief because of any one provision,” he added.

Even if drilling is permitted, it’s unclear whether energy interests will flock to the region. The expense of setting up shop in such a remote area, while fending off legal challenges from green groups, may not appeal to companies at a time when the market price of oil is under $60.

Regardless, the Trump administration has demonstrated particular zeal in peeling away protections from public land. The Arctic refuge is set to follow the Bears Ears and Grand Staircase national monuments as parts of America where the doors are being flung open to drilling, tree felling, grazing and other activities. This week, in another reserve lying to the west of the Arctic refuge, the Trump administration offered up 10.3m acres, an area rife with caribou, grizzly bears and migratory birds, to oil companies for leasing.

“Trump is auctioning off our wildlife and a livable climate to the highest bidders.”

“Trump is auctioning off our wildlife and a livable climate to the highest bidders. It’s disgusting,” said Kristen Monsell, a senior attorney at the Center for Biological Diversity. “North Alaska is the country’s last frontier, and he’s letting the oil industry suck the life out of it.”

The potential arrival of drilling, even if it occurs years from now, would be just the latest bewildering change for the Gwich’in. The Arctic is warming twice as quickly as the global average, threatening dozens of communities with potential inundation or subsidence as ice recedes and thaws. Wildlife is shifting so quickly that tribes are struggling to catch food while coming up with new words for alien-like creatures, such as wasps, never seen in the area before.