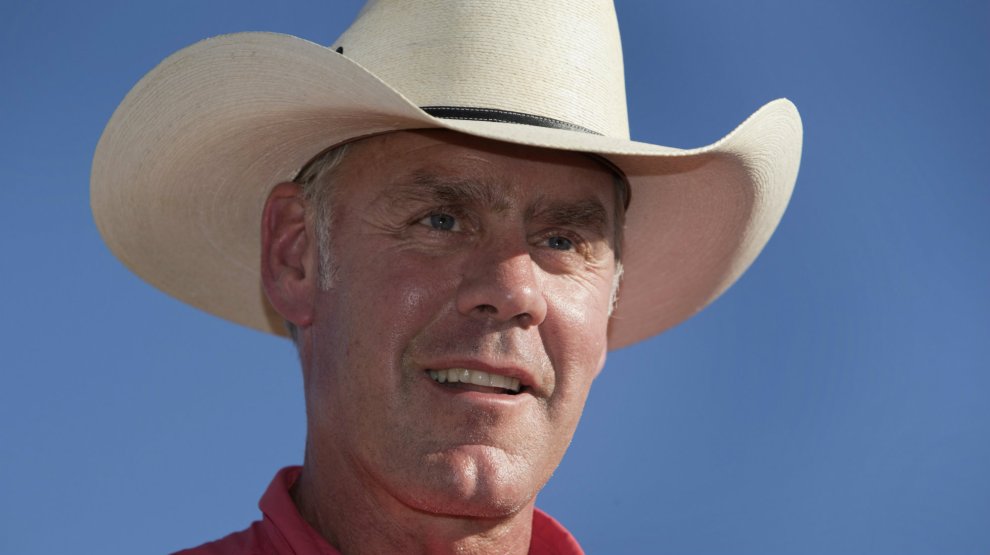 This story was originally published by The Huffington Post and is reproduced here as part of the Climate Desk collaboration.

In late June, Interior Secretary Ryan Zinke met in Nevada with billionaire friend and political benefactor William Foley. As the owner of Las Vegas’s new National Hockey League team, the Golden Knights, Foley was looking for someone to give his squad a “motivational speech.” Zinke kindly obliged.

After the speech, Zinke hopped on a charter plane belonging to oil-and-gas exploration company executive Jay Nielson, flying to Kalispell, Montana, to attend a meeting of the Western Governors’ Association in his hometown of Whitefish. The now infamous flight cost the taxpayers a whopping $12,375, as The Washington Post first reported.

The revelation led the Interior Department’s inspector general office to open an investigation into Zinke’s use of charter planes. Shortly after, the U.S. Office of Special Counsel began its own investigation into whether Zinke’s Las Vegas speech with Foley violated the Hatch Act, which prohibits executive branch employees from engaging in political activity. Foley had been a major donor to Zinke’s political campaigns.

But there may have been additional and previously unreported questionable uses of public funds related to Zinke’s Montana trip.

HuffPost has found that at least one high-ranking Interior Department official who attended the WGA meeting in Whitefish with Zinke stayed at the Whitefish Mountain Resort—a sprawling ski and lodging facility just west of Glacier National Park owned by none other than Zinke’s friend and donor William Foley.

The Interior Department staff person who stayed at the lodge is acting director of the Bureau of Land Management (BLM) Michael Nedd, who spent three nights there. Timothy Williams, deputy director of the Office of External Affairs, also attended the conference, but an Interior Department spokesperson did not respond by the time of publication to requests for clarification on whether he lodged at the resort.

According to Nedd’s work calendar, which the website AltGov2.org obtained through an open records request and HuffPost reviewed, Nedd departed Washington, DC, on June 25 and traveled to Kalispell, just south of Whitefish. He stayed the night at the resort. The next day, Nedd held several morning meetings around town, and attended the WGA annual meeting in the afternoon. The schedule lists more meetings the next day, including one with former Wyoming Gov. Dave Freudenthal and Rob Wallace to discuss “sage grouse plans.” Wallace, a former lobbyist for GE Energy (now GE Power), currently heads government affairs at the socially-conscious investment firm i2 Capital. After another night at the resort, Nedd departed for meetings in Missoula, Montana, on June 28.

Whitefish Mountain Resort is solely owned by a company called Winter Sports Inc., according to business records filed with the Montana secretary of state’s office. Foley is listed as a director for Winter Sports, and SEC filings indicate that he first purchased an interest in the company in 2005.

The resort is situated on federal land in the Flathead National Forest, which the US Forest Service, an arm of the Department of Agriculture, administers. But the Interior Department’s BLM is also involved in matters concerning the forest in some cases. For example, BLM handled recent public comments on the Forest Service’s proposal to raise campground fees in the area.

The General Services Administration’s approved per diem lodging rate for federal employees in June this year in the Whitefish area was $95 per night.

BLM spokesperson Megan Crandall said the nightly rate for the room Nedd stayed in at the resort was $99, plus a one-time $55 cleaning fee, adding that the agency was not involved in booking the resort. “The Western Governors Association booked and coordinated all blocked rooms for BLM attendees at the conference,” said Crandall via email. “BLM or other Federal officials were not involved in selecting the rooms.”

She referred additional questions to the WGA, but a spokesperson for the WGA did not respond to a request for comment.

“His recent instance appears to constitute another questionable tie to Secretary Zinke that deserves further review to ensure that no ethics or travel violations occurred.”

A BLM spokesperson later confirmed that Nedd paid out of pocket the difference between the government authorized per diem expense and the actual resort rate.

Other than his most recent foray into professional sports teams, Foley’s business empire spans the finance, tourism, wine, restaurant and ranching industries. He is chairman of Fidelity National Financial and Black Knight Financial Services, which provide diverse financial, insurance and mortgage services. He owns several estate vineyards and wineries in California and a group of restaurants in Montana, as well as the Rocky Creek Cattle Company, a 30,000-acre ranch in Deer Lodge, Montana, which includes a “Cattleman’s Club” replete with a private golf course, spa, luxury cottages and fitness center.

Foley is also the president of Glacier Jet Center, an exclusive concierge and service terminal for private and chartered planes, located in the Glacier Park International Airport – the same airport where both Zinke and Nedd landed in June.

Foley is a longtime Republican donor and bundler who supported the presidential campaigns of George W. Bush and John McCain. He’s also been a leading promoter of Zinke’s political career. Federal Election Commission records show that employees, executives and political action committees associated with Foley’s financial service companies donated a total of nearly $200,000 to Zinke’s two congressional campaigns in 2014 and 2016. Zinke considers Foley a friend and has called him a “very, very bright guy.”

In January this year, Fidelity National Financial lobbied Congress in support of Zinke’s confirmation as Interior secretary. Fidelity’s lobbyist explained at the time that Foley “really likes the guy. He think he’s a straight shooter.”

Asked about arrangements for the lodging and why staff stayed at a resort owned by Zinke’s friend and donor, a spokesperson for the Interior Department referred HuffPost to BLM, adding that Zinke did not stay at the Whitefish Mountain Resort on that trip.

Foley could not be reached directly for comment, but a spokesperson for Whitefish Mountain Resort said Foley was not involved in arranging the Interior staff’s stay at the resort. “He was not aware that Interior staff were staying at the resort, and therefore he was not involved in arranging their stay,” said the spokesperson, who added that Nedd was charged the standard rate for his lodging. The resort confirmed Nedd paid a rate based on the blocked rooms by the WGA conference. She added that the resort does not offer any federal government rates.

Scott Amey, general counsel for the ethics watchdog Project on Government Oversight, says this case raises concerns. “This administration has put Whitefish, Montana, on the map, so to speak,” he said. “And this recent instance appears to constitute another questionable tie to Secretary Zinke that deserves further review to ensure that no ethics or travel violations occurred.”

Zinke’s use of public funds have been under increasing scrutiny. Last week, Politico reported the Interior secretary spent more than $14,000 on helicopter rides this summer to attend various events in the Washington, DC, area. These included booking a helicopter from Virginia to Washington to make a horseback riding session with Vice President Mike Pence.

This is also not the first time the town of Whitefish, population 6,357, has come under the spotlight in recent months. The FBI is reportedly inquiring into the $300 million contract that Whitefish Energy Holdings secured to rebuild Puerto Rico’s electric grid after Hurricane Maria. The company has just two full-time employees, and its CEO, Andy Techmanski, is acquainted with Zinke, though the Interior secretary has categorically denied any involvement with the contract.