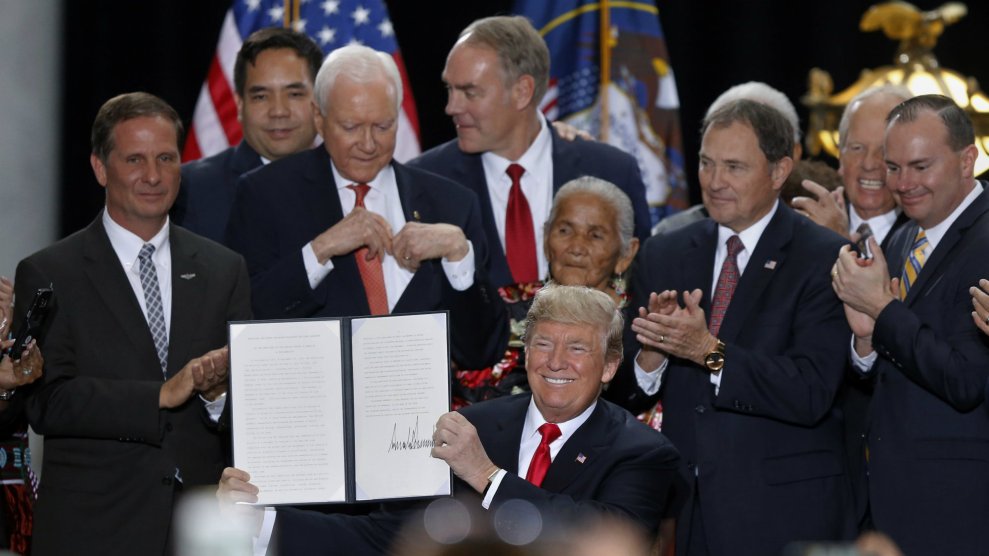 Over the past two months, at administrative chapter houses adjacent to Bears Ears, 98 percent of Navajos voted in support of the national monument designation. These voters are likely voting for more than the protection of sacred sites. Many are likely also there for a say in the future of the uranium mining that has plagued Navajo communities since World War II, when the development of the atom bomb created a demand for yellowcake.

From the 1940s to the 1980s, 30 million tons of uranium were extracted from mines on the Navajo Nation. Today, more than 500 abandoned uranium mines remain on the reservation, which stretches 27,000 square miles from the south rim of the Grand Canyon past Gallup, New Mexico, and north to the San Juan River in Utah, poisoning the water and carrying in the dust. Only one mine has been cleaned up. It is estimated that total cleanup will cost between $4 billion to $6 billion and could take a century to complete. A recent study by researchers from the University of New Mexico found 85 percent of Navajo homes had uranium contamination, and Navajos living near these mines have higher levels of uranium in their bones than 95 percent of the American population. Even infants have been found to have uranium in their urine.

In a penetrating series of articles on uranium mining’s legacy in the Navajo Nation, published by the Arizona Republic in 2014, Lillie Lane, the Navajo Nation’s Environmental Protection Agency outreach coordinator, told the newspaper the radiation has tainted their chromosomes. “I think we are still in the infant stages of seeing what the impacts are in the gene pool of the Navajo people,” she said.

Meanwhile, Interior Secretary Ryan Zinke and Trump have tried not to portray the shrinking of Bears Ears and Grand Staircase-Escalante as energy issues. In his announcement at the Utah Capitol steps in Salt Lake City, Trump did not mention “energy dominance,” a favorite phrase. Zinke told reporters prior to the announcement his review was “not about energy.”

Maybe that’s true. In fact, a gaffe the previous week, in which Trump used a ceremony honoring the Navajo Code Talkers for their service as a chance to take a political swipe at Sen. Elizabeth Warren, D-Mass., by again calling her “Pocahontas,” reminded Indian Country that this wasn’t all about energy.

Hiding behind the fig leaf of “local” concerns, Trump expressed outrage at how the monument is allegedly preventing rural families in San Juan County “from enjoying their outdoor activities.”

This turn of phrase inevitably brings to mind Ryan Bundy, son of the Nevada rancher Cliven Bundy who led an armed standoff against the Bureau of Land Management, for which he and several of his sons are presently being tried on federal charges in Nevada. Ryan and his brother Ammon famously led a second armed takeover in 2016 of the Malheur National Wildlife Refuge in Oregon and have also been active in Utah. Ryan led armed ATV riders in 2014 over ancient Puebloan villages in San Juan County during a protest organized by County Commissioner Phil Lyman in protest of the closure of an illegally created road through the ruins. In April, Zinke announced the opening of some of these sites (although not the trail Bundy protested) to motorized traffic, citing the right of people with disabilities to have access to them.

Lyman (who was convicted of a misdemeanor for his role in the ATV ride) was on stage with Trump last week for the announcement. Trump flattered Utah Republican leaders who flanked him onstage, including Gov. Gary Herbert, Sen. Orrin Hatch and Rep. Rob Bishop. All have been staunch opponents of Bears Ears, a groundbreaking monument proposed by five Indigenous nations: Navajo Nation, Hopi, Zuni, Ute Mountain Ute and Uintah and Ouray Ute.

So in that way, the monument isn’t about energy. But in another way it is, especially when it comes to uranium. During Zinke’s review of 27 national monuments, the Utah legislature submitted a 49-page comment claiming Bears Ears National Monument would destroy the state’s uranium industry.

On Friday, the Washington Post broke the story that Energy Fuels Resources, owners of the Daneros Uranium Mine and the White Mesa Uranium Mill, had lobbied the Interior Department to reduce the monument because it impeded their business interests in the area, effectively refuting Zinke and Trump’s claims energy interests did not play a role. In a May 2017 letter to the Interior, the company’s chief operating officer, Mark Chalmers, urged the monument be reduced because there are “many known uranium and vanadium deposits located within the newly created (Bears Ears National Monument) that could provide valuable energy and mineral resources in the future.”

The monument has many inactive uranium mines and unused mining leases that are not being used due to a poor market for uranium. But one mill, the White Mesa Uranium Mill, is still of concern. Built in 1979, just a few miles north of the Ute Mountain Ute community of White Mesa on a site sacred to the tribe, it is just east of the border of the national monument.

The mill receives uranium ore from a variety of sources, including the Daneros Mine just west of the monument which was originally included in the proposal by the tribes within the boundaries of the monument. The Utah legislature feared that the hauling of such dangerous material across the monument would be stopped or heavily regulated by the Bears Ears Commission, which, under Obama’s monument order, includes representatives of five tribes in a super-advisory role.

The White Mesa mill has five cells or “impoundments” covering 275 acres that hold radioactive uranium tailings and toxic waste. If the facility were built today, it would require two liners and a system to detect leakage between them. However, three of the cells at White Mesa possess only a single liner and no detection system. Disturbingly, the cells are also on top of the area’s main source of drinking water, the Navajo Sandstone Aquifer.

In 2004, the Department of Energy handed over regulation of the mill to the state of Utah. The mill has been operating with an expired license for a decade, and a recent court case in U.S. District Court in Salt Lake City further calls into question the vigor of the state’s oversight. A case against Energy Fuels was dismissed because current laws regulating deadly radon emissions do not apply to impoundments that no longer actively receive waste. This means once a cell is unused there is no regulation of it and the long-term safety of the community is entirely in the hands of the company.

Currently, 100,000 tons of uranium over seven years can be hauled from the Daneros Mine, across Route 95, which runs through Cedar Mesa just below the two buttes that give Bears Ears its name. Energy Fuels has requested this be increased to 500,000 tons. Even with the reduced boundaries, uranium would be hauled through the monument, meaning the Bears Ears Commission could have oversight on its transport. Two of the tribes in the commission, the Navajo Nation and Ute Mountain Ute Tribe, have communities directly impacted by the toxic waste of uranium mining and its refinement into yellowcake.

“As a former member of the Ute Mountain Ute Tribal Council, we have worked diligently on this issue to no avail.”

There is also the concern that uranium tailings can be wind-borne. The way traditional Navajos and members of other tribes use the land—for gathering herbs and in ceremonies—raises their exposure risk if the land is mined. The Ute Mountain Ute community continues to be exposed to toxic waste from the White Mesa Uranium Mill, just a few miles away. White Mesa is a traditional Ute community where 50 percent of the population—only 900 people in the world— still speaks the tribe’s language.

“As a former member of the Ute Mountain Ute Tribal Council, we have worked diligently on this issue to no avail,” Regina Lopez-Whiteskunk, a former member of the Bears Ears Intertribal Coalition, which lobbied for the monument, told High Country News. “It is only a few miles away from our White Mesa community, a community where my son is raising his family of five children.”

Trump’s proclamation divided the Bears Ears monument into the Indian Creek and Shash Jáa (Navajo for Bears Ears) units. It limits the Bears Ears Commission’s jurisdiction to the latter unit, but gives a San Juan County commissioner of Navajo descent a seat on the commission. In short, a county official would have equal status with representatives of five sovereign Indigenous nations and the U.S. federal government. This is in line with the Bundy’s assertion that county leadership is the supreme law of the land, as espoused by former Bundy attorney, Karen Budd-Falen, who is under consideration by the Trump administration to be head of the BLM.

For now, that county official is Rebecca Benally, who has been an outspoken opponent of the monument. She’s a member of the Aneth Chapter, a major gas and oil producing area outside of Bears Ears, and the only one of seven Navajo chapter houses in Utah to vote against the monument. Benally is up for re-election next year.

By removing monument status from over 1 million acres of land, Trump also took away the Indigenous nations’ oversight, which had been granted in the Obama monument designation. As a result, those tribal nations also lose any say over substantial oil and gas reserves and uranium. And even though the last oil well stopped producing in the Bears Ears area in 1992, an analysis by the Center for Biological Diversity found that since 2013 energy companies had asked the BLM to open 100,000 acres of land within the Bears Ears monument area to oil and gas leasing.

In the end, it appears that Trump, his administrators and Utah’s state officials all share the notion that the best use of Indigenous nations’ homelands is as “national sacrifice zones” for energy. Trump’s “energy dominance” doctrine, therefore, will be a toxic legacy passed on to American and Native American grandchildren.