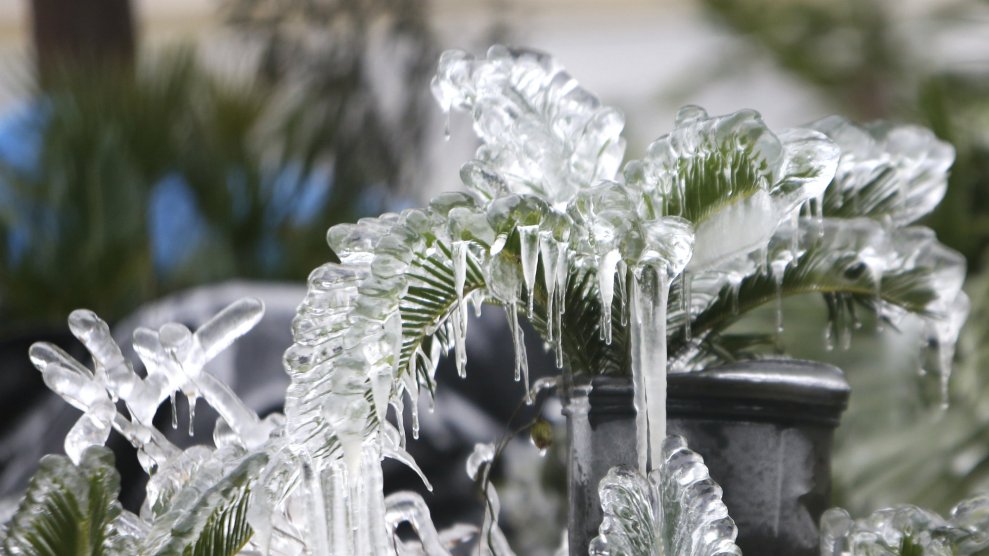 The Eastern United States is starting out 2018 the same way it ended 2017: bone-chillingly cold. Many New Year’s Eve revelers endured record-breaking low temperatures, and it’s only going to get colder. Thanks to a weather system known as a “bomb cyclone,” the entire East Coast is or will soon be subject to subzero temperatures, hurricane-force winds, snow, and ice—including Florida, the Sunshine State.

RARE SIGHT: it's snowing in Tallahassee FL for the 1st time in 28 years. @NWSTallahassee measured 0.1" of snow/sleet on their roof @floridastate at 8:30 AM. Video via 904 Happy Hour. #snow #flwx#frozenAmerica pic.twitter.com/dG5uMrTcpM

But despite how strange it is to spot snow on palm trees, the sight doesn’t disprove global warming.

Just like every other time it gets cold enough to require a winter coat, climate change deniers have seized on the chilly weather outside to argue that global warming can’t be happening. They’re wrong—the frigid temperatures might actually be because of global warming.

In 2016, Mother Jones reported on Rutgers researcher Jennifer Francis and other scientists who believe that global warming is playing a role in extreme cold snaps:

That shrinking temperature difference is what wreaks havoc on the jet stream. “When the jet stream gets weaker, it meanders more,” explained Francis in an interview this week. “It wanders north and south and when it gets into one of these wandering and wavy patterns, that’s when we see these pools of cold air pulled southward.”

It’s also important to remember that weather and climate are two different things. As the National Weather Service puts it, “Weather is what you get, climate is what you expect.” The daily temperature is weather, but the averages of those temperatures over a long period of  time is climate. So even though much of the country finished out 2017 with record-breaking temperatures, it was still the second hottest year on record. The clear, long-term trends are far more important than the snow Tallahassee residents are seeing outside today.