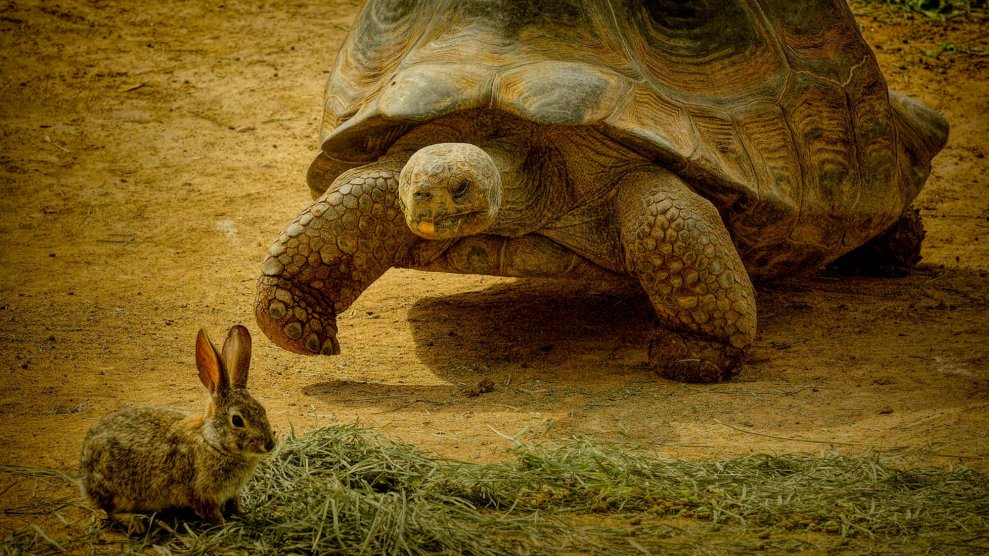 This story was originally published by Project Earth/Fusion and appears here as part of the Climate Desk collaboration.

The story of the tortoise and the hare teaches us that slow and steady wins the race. But when it comes to adapting to changing environmental conditions, Aesop (the ancient Greek storyteller credited with the fable) isn’t quite on the money. A study released last week shows that mammals and birds are faster to adapt and better equipped to deal with changes in temperatures than reptiles and amphibians.

“Roughly speaking, birds and mammals have a rate of adaption 2-3 times higher than ectotherms [reptiles and amphibians],” explained Jonathan Rolland, a research fellow at Canada’s University of British Columbia and lead author of the study that appeared in Nature Ecology & Evolution. “In geological timescales, endotherms [birds and mammals] are much faster in adapting to changing temperatures than ectotherms.”

In order to reach to their findings, Rolland and his colleagues sifted through an absurd amount of information: about 300,000 million data points covering almost 11,500 species, comprising of both living animals and fossil records. The team was then able to reconstruct the types of environments that animal groups have inhabited over 270 million years, focusing on how temperatures have fluctuated across history and habitats.

“You have to imagine that 40 million years ago, global temperatures were much higher, and there were tropical areas in the poles, even in Antarctica,” said Rolland. “As the Earth began to cool, some species evolved, while others just moved to warmer climates.” Birds and mammals proved themselves to be better at evolving than their cold blooded counterparts, which explains why they were able to move into habitats in more northern and southern regions.

A number of traits likely allowed birds and mammals to adapt quicker to the changing temperatures, including the fact that they regulate their own body temperatures, meaning they don’t have to adjust their behavior to the climate to the same degree as cold-blooded animals. Rolland also explained that endotherms use their own body heat to control the temperature of their developing babies, which gives them higher survival rates during periods of temperature fluctuations.

So, does this mean that birds and mammals are better suited to survive the coming pressures of climate change?

Maybe, but we don’t really know.

The adaptions and evolutions that Rolland and his team investigated came about during millions of years. It’s hard to imagine that the same rules apply to the rapid and unprecedented fluctuations brought by climate change. “Because the climate conditions are changing very, very fast, there might be species that have the capacity to adapt but that won’t have time to,” said Rolland. He went on to emphasize that among the pressures that animals are currently facing, changing temperatures aren’t necessarily the highest on that list. Things like pollution, hunting, habitat loss, and introduction of invasive species are driving the pending extinction crisis.

Rolland and his team investigated evolutionary trends over 270 million years, but what we’ve done in the past few centuries have flipped the rules of evolution and tossed out the playbook. Species are disappearing up to 10,000 times faster than normal, with over 20,000 plants and animals on the brink of vanishing forever. About a quarter of all mammals and 12% of the planet’s birds are threatened with extinction. So sure, yes, birds and mammals have proved better at adapting to changing conditions in the past, but it’s unclear whether these traits will help them in such a precarious future.

And yet Rolland is hopeful that his work will help researchers better understand how different animal groups may react to the ongoing environmental pressures. “In the next decade, we will potentially be able to understand the connection between macroevolution, at large timescales, and the microevolution that is going on right now,” he said, “this may be important in understanding adaption to climate change, and understanding what the planet will look like in the future.