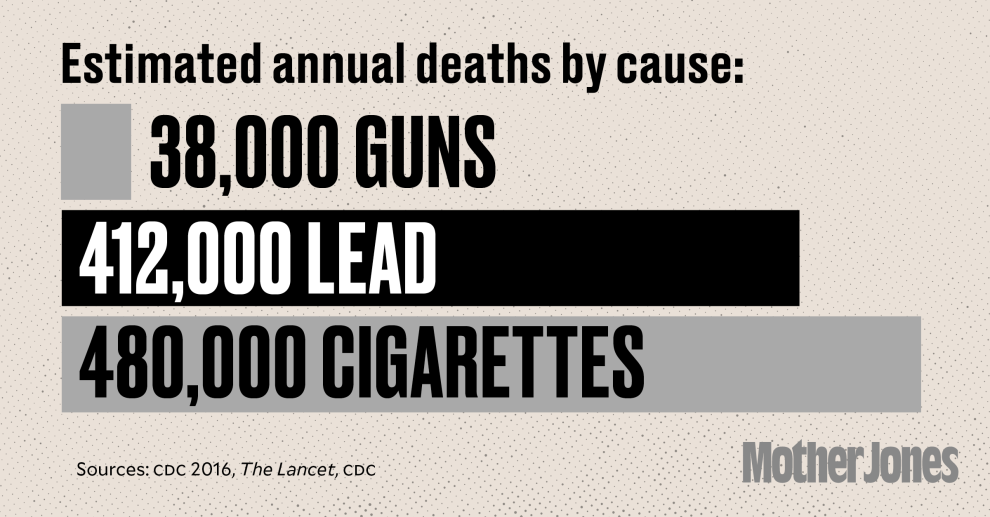 The impacts of lead exposure on children’s health and development are widely known, but new research suggests the poison could be more harmful to adults than previously thought. According to a new study in the public health journal The Lancet, lead exposure accounts for more than 400,000 adult deaths each year in the United States, a number nearly 10 times greater than earlier studies estimated. If this is accurate, it would put lead in the same realm as cigarettes, which are linked to the death of more than 480,000 American adults annually—an millions worldwide.

The research team, led by Bruce Lanphear, a professor of health science at Simon Fraser University in British Columbia, examined medical records on lead exposure in roughly 14,000 adult subjects. The records were collected as part of a federal health study between 1988 and 1994. After controlling for a variety of confounding variables—age, race, gender, diet, drinking, smoking, and so on—the researchers sought to determine, among  those subjects who died before December 31, 2011, when the feds last followed up with the initial study participants, what percentage of the deaths could be attributed to lead exposure.

Their analysis concluded that lead accounted for the deaths of 18 percent of the decedents. (Lead often killed via heart disease; the toxic metal is known to contribute to hypertension, a key cause.) Extrapolated to the number of annual deaths in the United States, the finding suggests lead exposure kills some 412,000 adults each year. By comparison, according to data from the Centers for Disease Control and Prevention, guns killed about 38,000 Americans in 2016, and cigarettes kill about 480,000 annually.

The researchers also examined how the level of lead in people’s blood relates to their risk of early mortality. They looked at blood lead levels ranging from 1milligram of lead per deciliter of blood (mg/dl) to nearly 7mg/dl—which is well above the 5mg/dl level that health authorities say requires medical intervention. They found a sharp increase in risk of early mortality even at the lower levels of lead exposure. “That’s important,” Lanphear told me, “because the way we regulate noncarcinogens is we assume that there are safe levels with thresholds—that until your blood-lead level gets to 5mg/dl, the assumption has been that there is no harm. In 2012, the CDC finally acknowledged that’s not true for children. And what this study says is it’s not true for adults.”

“The existing standards to protect people from lead are obsolete,” he adds. “They provide an illusion. They don’t protect people. This study serves as another reminder of how our lead standards have failed to keep up with the science.”