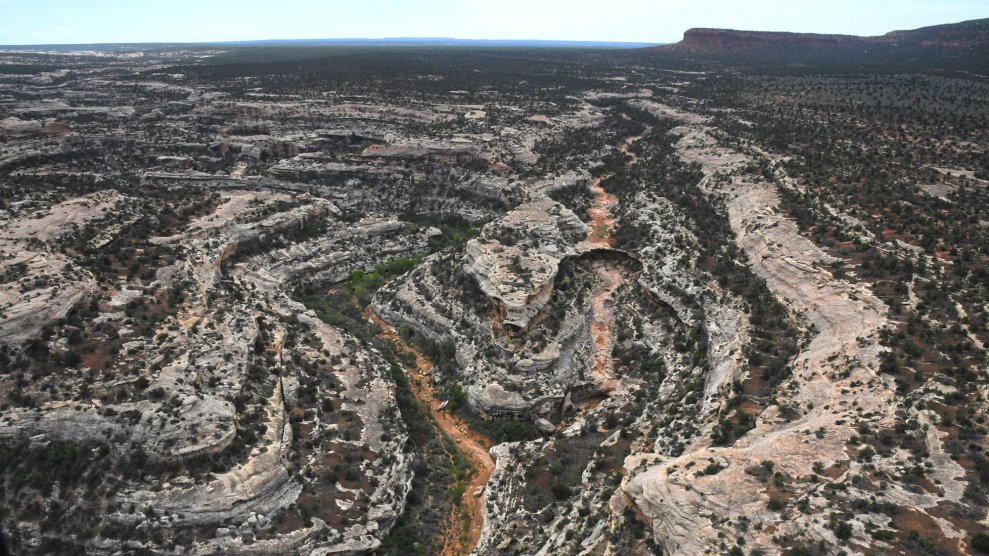 In 2016, paleontologist Robert Gay and a group of students stumbled upon a trove of prehistoric fossils in southeastern Utah, in what is part of the more than 1 million acres President Donald Trump recently cut from the Bears Ears National Monument. The team had been en route to another excavation site when an outcropping of rocks from the Triassic period caught Gay’s eye.

They stopped to investigate and immediately began picking up fossilized chunks of bone.

“The entire surface was carpeted with fossil bones,” Gay, the education director at the Colorado Canyons Association, told HuffPost. “Everywhere on the hillside, for 60 meters.”

What Gay’s team discovered could be the densest bed of Triassic-era fossils in the nation, and maybe the world. During an initial excavation at the site last year, he unearthed the intact skulls of three long-snouted phytosaurs, a reptile that lived more than 200 million years ago. That’s nearly 120 million years before Tyrannosaurus rex showed up.

During the Triassic period, which spanned 251 million to 199 million years ago, dinosaurs and a slew of other bizarre creatures roamed the Earth. There were many crocodile-like reptiles — armored plant-eaters, a two-legged species with a beak, and another with a blowhole on its head — along with “salamanders the size of cars, with toilet bowl lid heads,” Gay said. The period ended with a global extinction event that wiped out some 76 percent of marine and terrestrial species. And thus began the Jurassic period, the age of the dinosaurs.

Gay says he’s only scratched the surface of the fossil record at this Utah site, a record he believes could prove key to understanding how dinosaurs were able to respond to rapid climatic changes and came to dominate the landscape.

“This is the find of a lifetime,” he said. “I will probably spend the rest of my career working on this site.”

Meet @paleorob, who discovered that trove of crocodile-like phytosaur fossils in Bears Ears. He told me it's "the find of a lifetime."
"I will probably spend the rest of my career working on this site. It gives us a new, unparalleled look into the dawn of the age of dinosaurs." pic.twitter.com/N5CvvF29Le

HuffPost talked to Gay this week at the first of two public scoping meetings the federal government held to receive input on managing what remains of Bears Ears National Monument. Trump’s December announcement cut Bears Ears by 85 percent, to just over 200,000 acres, opening the door for new mining, drilling and other development on lands now left outside of the monument.

Gay still has a permit to work the site, but because it is no longer part of a national monument, he and his team are unable to use the $25,000 grant they received through a special Bureau of Land Management program that funds research on conservation lands. Gay said he can use the funds for other sites still in the monument, but not this one.

Work at the site will remain stalled until the team locates another source of funding. Gay has applied for other grants and is exploring partnerships that would allow for his team to continue field work there.

The question he’s looking to answer: “Why did dinosaurs come to rule the world?”

The latest fossil discovery is one of several important paleontological sites within the area cut from the monument. And Gay, who opposes the monument rollback, said there is much more to be discovered.

Bears Ears “preserves a unique slice of American history and pre-history dating back almost to the dawn of life on land,” he said.