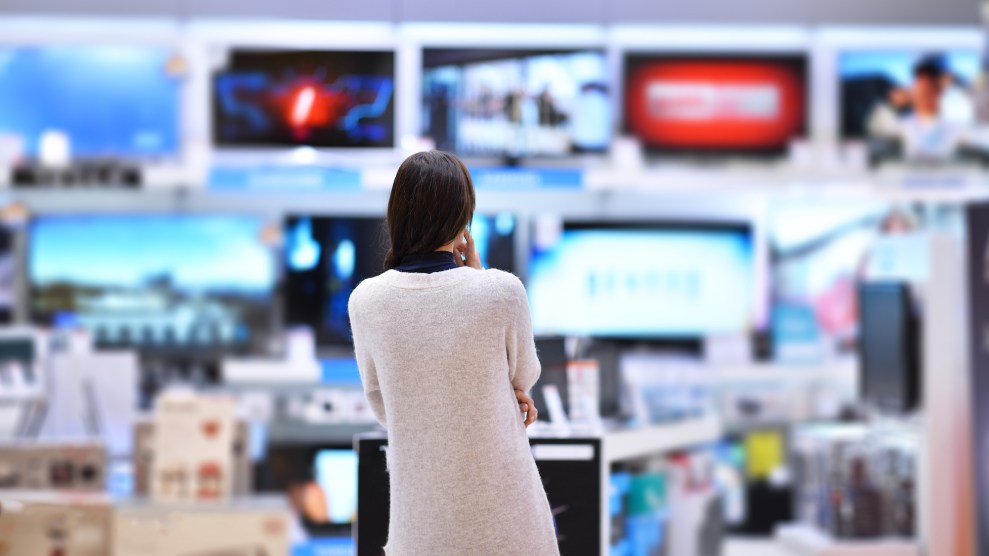 This story was originally published by WIRED and appears here as part of the Climate Desk collaboration.

Boy, it’s hard to stay optimistic these days, what with the impending doom of our species at the hands of…our species. Namely, human-caused climate change. Climbing temperatures are ripping apart ecosystems, and rising seas are already forcing people from their homes. If an asteroid was going to destroy our planet, now would be the time to just get it over with.

But today lands an uplifting and intriguing, if not counterintuitive, study in the journal Nature Energy. An international team of scientists has developed a global scenario called Low Energy Demand, arguing that humanity’s appetite for things like electric cars and cellphones, as well as the development of better building standards, can drive a revolution in efficiency that could help lower energy demand and encourage the proliferation of renewable energy. The researchers claim that if several trends fall into place, we’d be able to make the idealistic goal set by the Paris Climate Agreement to keep global temperatures from rising more than 1.5 degrees C.

To be clear: This is a highly theoretical scenario, not a certainty. It’s based on assumptions—technological adoption, population growth, etc.—and it is necessarily imperfect, like any model. These researchers aren’t saying, “Hooray, salvation!” They’re saying that given lots of converging trends in sustainability and efficiency, humanity could yet make big progress in tackling the problem of climate change.

This is how the researchers went about it. They identified major drivers of change in energy use, for example cities becoming test beds for innovations like the sharing economy. This is broken down into more specific trends, like the rise of shared electric vehicle fleets. “If everybody buys an electric car, well then you have to wait 12, 14 years for innovations to be rolled out into the marketplace, because people will not prematurely sell their car or scrap it,” says Grubler. “But in a car-sharing scheme, or shared mobility, we use these assets so much that it’s actually natural to replace these assets very regularly.”

“At this stage, we look at given these rising activity levels, how can we provide for those with dramatically less energy? Part of the answer is technologies can become much more energy efficient.”

This brings rapid innovation. And say you’ve got solar panels at home to charge your electric car. Not only can you send that energy into the grid when you’re not at home, but the battery in your electric car can store energy for someone else to tap into. You’re no longer just a consumer of energy, but an active participant in the dynamics of the grid.

Or take mobile phones. Now in the hands of billions people, users want their phones to do more, to replace more energy-hungry devices, like TVs. They want them to be more energy efficient. Those kinds of market forces—or consumerism, depending how you look at it—could in a way drive down energy usage.

The researchers then reviewed studies that showed what services humans would need to raise their living standards, particularly in the global south. “At this stage, we look at given these rising activity levels, how can we provide for those with dramatically less energy?” says Charlie Wilson, a coauthor on the paper and climate change scientist at the Tyndall Centre for Climate Change Research in the UK. “And part of the answer is technologies can become much more energy efficient.”

Using those inputs, they could calculate energy demand in the coming decades. “Then,” Wilson says, “we used a global model of the energy system to work out well how can we meet that energy demand in 2050,” using strategies like renewables. “That gives us then the emissions which we could work out and test whether they were consistent with our 1.5 degree C target.”

They were—even with a population that could grow to over 9 billion, a factor this scenario considered. “All other scenarios predict ever increasing energy demand,” says Grubler. “This scenario actually predicts a declining energy demand, despite having vast increases in activities. People travel more, eat better, have more material well being and wealth, but in a more efficient, organizational way.”

All well and good, but why would so many other scenarios predict increased energy use? “A lot of these narratives that are used to shape long-term scenarios, they’ve been focused on these really narrow ideas of what technology will look like in the future,” says Justin Ritchie, an energy economist at the University of British Columbia’s Institute for Resources, Environment and Sustainability, who wasn’t involved in the study. Standard practice for modelers is taking historical growth since WWII and extrapolating it forward. “Then this study is kind of turning that on its head, and saying, let’s take all of the kinds of discussions that people are having on the frontiers of technology and imagining that as the basis of climate impacts.”

“We’re not saying this scenario will happen no matter what. There could be lots of reasons for continued emphasis on, for example, fossil fuel burning.”

This is important, so I’ll repeat it: We’re talking about a scenario here, not a certainty. Take the smartphone example—consolidating a slew of devices into one, thus cutting how much energy you’re burning. “The question would be: Are you really prepared to watch TV on your smartphone?” asks Swiss Federal Institute of Technology climate scientist Reto Knutti, who also wasn’t involved in the study. “Of course you could, it’s technically OK, but the reality has been that whenever things get cheaper and more energy efficient, you just buy a bigger TV.”

Beyond the behavior of consumers, scenarios are also affected on a larger scale by the behavior of governments. So, ahem, the United States isn’t exactly on a course to abandon coal and pour mountains of money in renewables. But again, no model is perfect. Scientists can’t predict the future, but they can make good judgements about it based on past and current trends.

“Is it robust to possible political issues going on today or into the future?” asks Wilson. “Well, no. We’re not saying this scenario will happen no matter what. There could be lots of reasons for continued emphasis on, for example, fossil fuel burning, in which case the 1.5 degree warming target set in the Paris Agreement would not be met.”

But. This scenario teases apart not just the future of technological innovation, but attitude innovation. The abandonment of the let’s-all-own-cars-and-sit-in-them-in-traffic-alone model in favor of car sharing. “It does require an enormous, if you like, openness to innovation in our daily lives, as well as in the technological and infrastructural systems which provide the useful services we consume in our daily lives,” Wilson says.

Maybe this all won’t pan out. Maybe the developing world won’t build as efficient buildings as they could. Maybe electric cars won’t take over as soon as we’d like. And maybe Trump decides America’s grid should run entirely on coal. Nothing is certain, but good scenarios can go a long way in mapping out a stubbornly uncertain future.