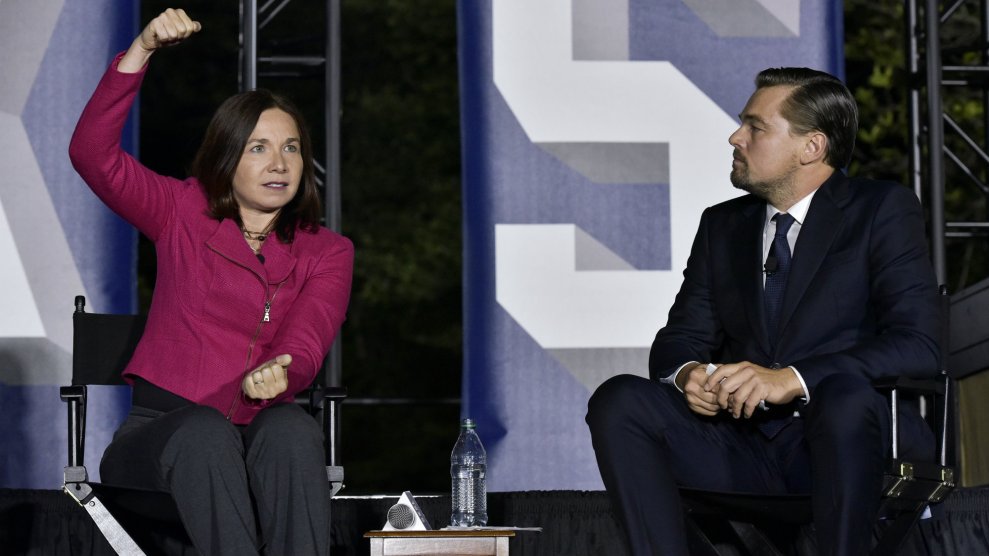 For the atmospheric scientist Katharine Hayhoe, climate change advocacy is literally an article of faith. An evangelical Christian, she travels the country speaking to community groups, many of them faith-based, about the perils of human-caused global warming. As she told Politico in 2015, “I believe God created this world for us and asked us to watch over it.”

Hayhoe, 46, co-director of the Climate Science Center at Texas Tech University, seldom passes up an opportunity to engage skeptical audiences, in person or through the written word. Together with her husband, Andrew Farley (a former linguistics professor at Texas Tech who now devotes himself to an evangelical Christian ministry), she wrote “A Climate for Change: Global Warming Facts for Faith-Based Decisions.”

For this installment of the Undark Five, I spoke with Hayhoe about getting out of the lab and spreading the word about climate change to people who may be reluctant to hear it. Our conversations, in person and by phone, have been condensed for space and edited for clarity.

Undark: What advice would you give to a colleague who’d like to do what you do—communicate with the public about a science policy issue?

Katharine Hayhoe: The first thing I’d advise is: Be serious about it. So many of us take communication for granted. We think, “Oh, well, I know what I’m talking about, so I can just stand up and do it.”

The reality is that communication is a science. If we’re going to be good at it, we have to respect it. I could tell you about some very senior scientists—household names—and they don’t do that. I remember going to a conference where someone very eminent was using transparencies that were so old they had turned yellow. He’d put no preparation into his talk and it showed!

I’d also suggest you customize your talks, with an awareness who your audience is. Every presentation I give is customized. I have about 10-15 different templates I work off of. In advance, I try to determine the level of scientific knowledge of the audience and I strive to present in a way they’ll understand—no jargon. Once I have my talk organized, I’ll practice it. Afterwards I’ll evaluate what I did to see how I can make it better the next time.

Finally, I’d follow the social science literature on emerging practices in communicating climate science. From that, I’ve learned a great deal about what matters to people, what questions they want answered, what messages are most important. I‘ve also learned a lot from researchers like Dan Kahan of Yale and from books like [Randy Olson’s] “Don’t Be Such a Scientist.”

UD: What’s wrong with being “such a scientist”?

KH: There’s nothing wrong with it in a laboratory. Unfortunately, the very thing that makes us good scientists can make us bad at communicating with the public. We tend to be convinced by data, analysis, research, and logic, and so we often overload our audiences with facts.

When I first started lecturing, I’d show up with facts, facts, facts. And most of the questions from the audience would be would be “Why should I care?” “How does it impact me and my family? “What can we do about it?” So now I no longer talk just science, science, science. Instead, I connect the science to why it matters personally and what we can do to fix this problem.

This is something that we scientists are not trained to do. I’ve had a steep learning curve in terms of presenting material that’s important to the audience. These days, I talk just as much about climate solutions as I do about climate science because that’s what people want to know. Solutions are not solely in the realm of science; solutions are to be found in engineering and in business. To be more effective, I’ve had to deliberately educate myself on areas that are really very far beyond my research focus. It’s been a good thing.

UD: How did your lecturing career begin?

KH: It began when we moved to Texas from Indiana more than a decade ago. My husband had accepted a position in linguistics at Texas Tech. I was the “plus one” that accompanied him on his journey.

A few months after arriving here, I got an invitation to speak at a women’s group. The topic was climate change. They weren’t all onboard, but they were curious. That was the first time that I had really stepped outside the ivory tower to address a group that wasn’t 100 percent convinced. They had genuine questions and they made me feel like I could provide some answers. That was how it began.

UD: When you speak to faith-based groups, you usually begin by talking about your own religious beliefs. Why?

KH: When you talk to anyone, whether it is an individual or a group, the most important thing is to connect. What is it that we have in common? By connecting over what we share, we can bridge to why we should care about climate change.

So when I talk to water managers, I start by talking about flood and drought and all the problems those pose for Texas. When I’m talking to people who live in a certain place, I talk about what makes this place important to us and how climate change might alter it. And when I speak to Christian college students, I usually start with our shared belief that God created this amazing world and gave it to us to love and care for.

I spoke at a conservative Christian college, Dallas Baptist University. They brought me in because a level of concern was already there. Not everybody was in agreement for sure. But there was enough people, a critical mass, who felt like they’d like to have a conversation.

To be honest, some of the toughest audiences I’ve spoken to weren’t at faith-based venues. If I’m at a church and I’m introduced by the pastor, people will be respectful. Farmers and water managers in Texas are not an easy audience. A lot of them think that weather just changes all the time and that this was what we are seeing. But these are the people you want to engage with.

UD: Do you think all the outreach you’ve been doing makes a difference?

KH: Whenever I give a speech, I see signs of hope. In San Antonio, there’s a solar company taking unemployed petroleum industry workers and retraining them to make solar panels. Here in Lubbock, Texas, a town that a survey once described as the second most conservative city in the United States, a local Christian nonprofit just got a grant. They called me up and said, “We want to put solar panels on our roof.”

Among scientists, because of the urgency of climate issues, you see a lot more seriousness about science communication. In the last five years, you’ve seen professional societies like the American Geophysical Union offering communications workshops at their annual meetings. And those workshops are packed!

And in the faith community, you see lots of organizations that are thriving. We have the Evangelical Environmental Network, Young Evangelicals for Climate Action, and the Catholic Climate Covenant. There are even the Green Muslims.

You know, good news is everywhere. Hope really is everywhere. But hope is not a passive emotion. We have to go out and look for it. That’s what I try to do.

Claudia Dreifus writes the “Conversation With…” feature for the science section of the New York Times. An honorary member of the science honor society Sigma Xi, she teaches science communication to graduate students at Columbia University’s Earth Institute.