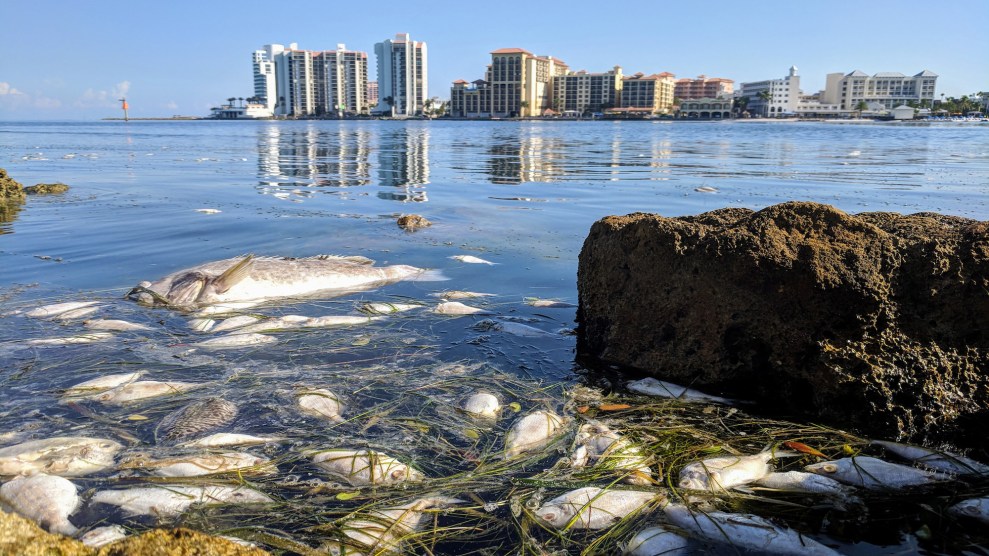 It’s the smell as much as the sight of thousands of dead fish and closed beaches that reminds coastal Floridians that the naturally occurring algae Karenia brevis, the cause of the red tide, has gotten out of hand. The red tide that began last fall and has stretched to about 150 miles of Florida’s Gulf Coast this summer tends to leave a numb, tingling sensation in the nose and throat—like “being hit with tear gas,” as University of Miami scientist Larry Brand describes it. Scientists expect the gooey, toxic bloom to linger through November, just as coastal precincts will be casting ballots in close state and federal elections.

“As they’re walking into the polls, voters are going to be smelling the effects of red tide,” says Aliki Moncrief, executive director of the environmental group Florida Conservation Voters. That could be a big problem for Gov. Rick Scott in his race to unseat Democratic incumbent Sen. Bill Nelson.

“As they’re walking into the polls, voters are going to be smelling the effects of red tide.”

Florida’s red tide and blue-green algae problems (the latter affects freshwater) have been cropping up in campaigns, with Democrats and Republicans alike stumping on the issue. But only one candidate has earned a nickname and a hashtag: #RedTideRick.

Both Scott and Nelson have run ads in recent weeks on the issue and are talking about it on the stump, but have also done so in their respective roles as governor and senator: Nelson is giving an address at a red tide briefing on Capitol Hill on Thursday morning and introduced a related Senate bill with Republican Sen. Marco Rubio, while Scott announced a state of emergency in August, along with additional funding for science labs and affected communities.

Despite his efforts, Scott’s nickname has stuck and followed him across the state. At a campaign stop at Mojo’s Real Cuban restaurant in Venice, Florida, a week ago, dozens of protesters swarmed outside shouting, “Hey hey, ho ho, Red Tide Rick has got to go.” After ten minutes, Scott was ushered out the back door amid the angry protests, and his campaign canceled an event the next day in his hometown of Naples, reported the Naples Daily News.

Moncrief dismisses Scott’s recent announcements as a too-little-too-late “election-year ploy” and says there are good reasons Scott is such a prime target. Working with the state Legislature, Scott has overseen cuts to environmental budgeting and enforcement while long flirting with climate change denial, having once disagreed that there is manmade climate change and later dodging the question by saying, “I’m not a scientist.” The Trump administration’s interest in expanding offshore drilling has been a controversial topic, and coastal Florida, of course, is on the front lines of sea level rise.

“When you see the red tide and you see the blue-green algae and you see the fish kills, they are very obvious visual signals of the decline of Florida’s environment,” says Moncrief, whose group is an affiliate of the League of Conservation Voters, which has endorsed Nelson. That’s Scott’s doing, she claims: “Our water quality and water pollution is absolutely the purview of our state government.”

The algae crisis has been cooking since last October in southwestern Florida on the heels of Hurricane Irma—though technically there are two algae crises. One is blue-green algae that thrives inland in fresh water and is closely linked to agricultural and urban runoff. The second is the red tide that has dominated Gulf waters and is caused by a more complicated set of factors. Nitrogen, some of which comes from agriculture, is necessary for it to thrive. Typically, winter winds tend to break up the tide south into the Gulf of Mexico. But last winter, the strong northern winds didn’t come through.

Richard Stumpf, an oceanographer in the National Oceanic and Atmospheric Administration, says optimal red tide conditions can include the nutrient levels of the water and the direction the wind is blowing—usually the algae thrives in summer through the fall, and winter winds push it out. Every 10 or 20 years, though, conditions combine for a worst-possible scenario, and this year it happens to coincide with the midterms.

One factor possibly making conditions more favorable to harmful blooms is climate change. Climate change is not just about rising water temperatures, Stumpf notes, but about “shifts of systems. I can’t blame this on climate change, but certainly the conditions are something we’ll have to consider. Is this a one-off event every 10 or so years, or is this something that could potentially happen more frequently if the fronts stall out and don’t go through Florida?”

Unless conditions drastically change, which Stumpf does not expect, the red tide “can very well stay here” through fall.

The bloom has affected all sides of Florida’s coasts and has recently reached the panhandle. Hospitals have reported an uptick in patients complaining of problems like sore throats and runny noses, and even respiratory problems for people who already have asthma. Marine life washes onshore, and it’s taken a toll on tourism-driven businesses, which affects voters across party lines, including in Republican-leaning areas like Brevard and St. Lucie counties.

“You have coastal Republicans who tend to be environmentalists because it’s in their front yards,” especially on water issues, says Steve Vancore, a Democratic pollster and consultant who lives in Tallahassee. “Rick Scott knows that, which is why he’s been campaigning on water quality. Democrats have higher levels of credibility on environmental issues.”

In the race between Scott and Nelson, issues like immigration, health care, gun policy, and the economy continue to drive most of the debates. The latest Quinnipiac University poll has shown Nelson up by 7 points, driven primarily by women, and potentially partially driven by national news events like the Supreme Court battle over Brett Kavanaugh.

Yet there’s anger out there about the red tide—as the angry protesters trailing Scott and some scathing editorials illustrate—and environmental campaigners are just beginning to connect those concerns to Scott’s environmental record as governor. While Vancore thinks water issues could swing centrist and Republican votes, the Environmental Voter Project’s Nathaniel Stinnett sees a chance to drive turnout—especially among the estimated 1 million registered voters in the Sunshine State the group has identified as likely pro-environment but who did not turn out in 2014. “Our volunteers never even mention the red algae blooms, but voters are bringing up the issue all on their own,” Stinnett says. “This is definitely going to drive turnout.”