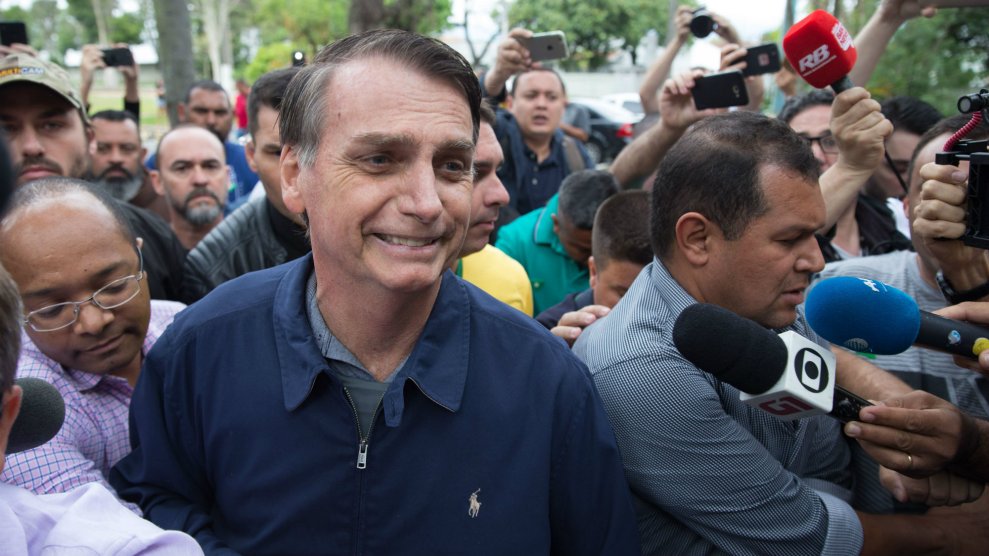 As the vast Brazilian rainforest steadily dwindles, so do our chances of limiting global warming to 1.5 degrees Celsius. And with the possible election of Jair Bolsonaro, the so-called “Trump of the Tropics” and far-right frontrunner in the Brazilian presidential election, a crucial part of the planet’s carbon emission-curbing toolkit might be in jeopardy.

Bolsonaro has indicated he may open Indigenous areas up to mining, even potentially introducing a paved highway through the Amazon. The environmental impact of those policies would be “the biggest threat to the Amazon since Brazil was under a dictatorship,” said Doug Boucher, Scientific Advisor for The Union of Concerned Scientists’ Tropical Forests and Climate Initiative. “It’s a threat to the climate of the entire planet.”

“It’s a threat to the climate of the entire planet.”

From 2005 to 2012, Brazil’s forests were doing alright. Deforestation decreased by about two thirds under the Luiz Inácio Lula da Silva administration—from 20,000 kilometers per year before Lula was elected to about 6,000 square kilometers per year. Since then, deforestation has basically remained at the same comparatively low levels, reducing Brazil’s CO2 emissions by more than half, according to Boucher.

Any shift in the country’s administration could endanger that progress—Presidential elections in Brazil tend to coincide with higher deforestation rates, regardless of the candidate. But Bolsonaro’s vision for handling environmental matters is uniquely jarring. Known for his homophobic, racist, and misogynistic views, the controversial politician also has a long track record of opposing an environmental agenda. He’s against taking action on climate change at all, pledging to follow President Trump’s lead by jettisoning the Paris Climate Agreement.

Bolsonaro has also made his views on race blatantly clear: He has criticized the Brazilian government’s commitment to preserving vast swaths of the Amazon for Indigenous people, promising that he will “not to give the Indians another inch of land.” Moreover, Bolsonaro has allied himself with the right-wing ruralista bloc, which represents the interests of agribusinesses and large landholders, and has been trying to strip away environmental protections against deforestation for many years.

Bolsonaro’s proposed environmental hit list goes on. He has promised to scrap the country’s Environment Ministry altogether, putting it under the scope of the Agriculture Ministry, which is led by agribusiness.

“Instead of spreading the message that he will fight deforestation and organized crime, he says he will attack the ministry of environment, Ibama and ICMBio [Brazil’s federal environment agencies],” said Brazil’s current environment minister, Edson Duarte. “It’s the same as saying that he will withdraw the police from the streets.”

“It’s the same as saying that he will withdraw the police from the streets.”

In many ways, Bolsonaro, an ex-army captain, seems to want to revert to the Amazonian policies that Brazil employed during the years of the South American nation’s dictatorship. At that time, during the ’60s, ’70s, and ’80s, the country promoted rapid development of the Amazon, paving roads and converting the forests into farmland and ranchland.

As the global fight against catastrophic climate change ramps up, forests are a necessary front of the action. According to a dire, new report by the United Nation’s Intergovernmental Panel on Climate Change (IPCC), halting deforestation could play a vital role in limiting global warming to 1.5 degrees Celsius, as forests have a significant capacity to absorb and store carbon.

“We have to take carbon dioxide basically out of the atmosphere in order to prevent a very dangerous increase in temperature, and major increases in floods, severe storms, and heat waves,” Boucher said. “The best way we know to take carbon dioxide out of the atmosphere is to preserve and rebuild forests.” And protecting the last remnants of Brazil’s forests would go a long way. The country contains 60 percent of the Amazon rainforest—by far the largest forest in the world—which uptakes CO2 year-round due to its perpetually wet and warm climate.

This past week, Bolsonaro won the first round of Brazil’s presidential election by a near majority, and yet his success is not yet certain. He will face left-wing second-place finisher Fernando Haddad in the second round later this month.

“Civil society should keep the pressure up—and they already are,” Boucher said. “We have to watch and see what happens.”