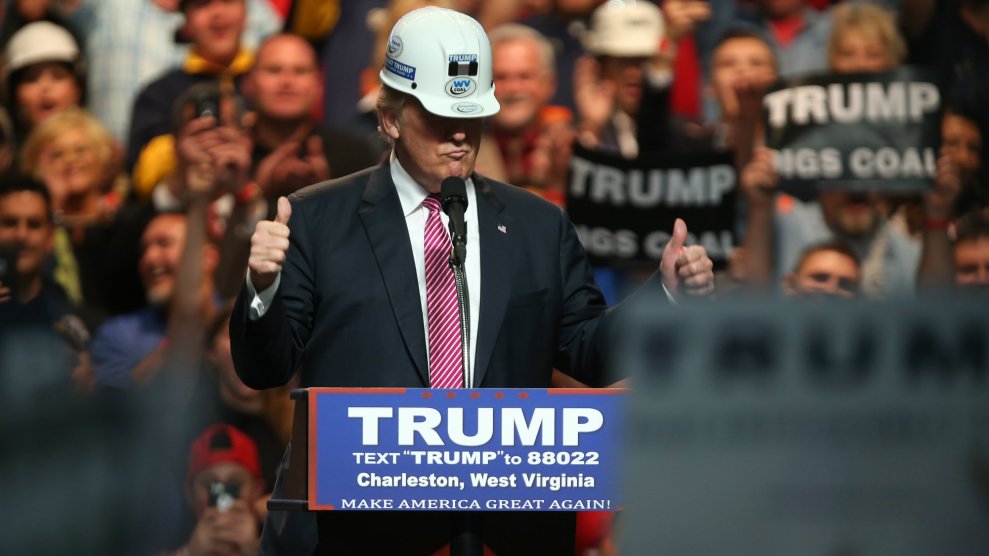 In January, the independent regulatory body that oversees the national electrical grid unanimously rejected a proposal from the Energy Department to subsidize struggling coal and nuclear power plants. Now, thanks to the retirement this summer of one of the regulatory commissioners most opposed to the DOE’s proposed market intervention, President Donald Trump may have cleared the last barrier in the way of his administration directly boosting the coal industry.

Bernard McNamee, a top Energy Department official who previously advised Sen. Ted Cruz (R-Texas) and worked for a think tank funded by the Koch brothers and Exxon, is Trump’s pick to join the five-person Federal Energy Regulatory Commission, the administration announced this week. If the Trump administration makes another attempt to save coal-fueled power plants—as a leaked government memo from May suggests—McNamee could play a role in approving it.

“It’s clear McNamee is nothing more than a political plant for Energy Secretary Rick Perry and Donald Trump,” Mary Anne Hitt of the Sierra Club said in a statement. “Collectively, they are trying to use FERC to manipulate America’s electricity markets to bailout dirty and expensive coal plants that are heading toward retirement, while locking in a fossil fuel future for communities across the country.”

“It’s clear McNamee is nothing more than a political plant for Energy Secretary Rick Perry and Donald Trump.”

Before retiring this summer, FERC Commissioner Robert Powelson strenuously criticized the Trump administration’s latest proposal, which would have ordered grid operators to purchase electricity from nuclear and coal power plants. “I don’t think it’s appropriate to put FERC in the arena of creating moral hazards in these markets,” he told members of the Senate Energy and Natural Resources Committee. “These markets are working hyper-efficiently.”

As deputy general counsel for energy policy, McNamee helped produce Secretary Rick Perry’s initial plan to prioritize coal and nuclear energy. The department’s proposal would have favored “power plants able to store a 90-day fuel supply on site, unlike renewable energy or natural gas plants,” the Washington Post reported. Almost immediately, the idea was met with backlash from an unlikely coalition of environmental advocates and oil lobbyists, who considered the proposal a thinly veiled attempt to manipulate the free market in favor of coal and nuclear interests.

Despite four of five FERC members—including Powelson—being Trump appointees at the time, the independent commission has long regarded itself as a neutral arbiter among different sources of energy. “The FERC does not pick winners and losers in its markets,” Chairman Kevin McIntyre said in a written response in April to lawmakers on a House Energy and Commerce subcommittee. “Rather, the FERC focuses on approving market rules designed to identify needed services and compensate resources for the specific services they provide without improperly favoring one resource type over another.”

That nonpartisan tradition has been under siege since Trump took office. In July, after an interview with Breitbart, FERC Chief of Staff Anthony Pugliese caught flak for criticizing Democrats for their efforts to block federal infrastructure projects because of their political animosity toward Trump. “They are putting politics above the best interests of not only the consumers in their state but also national security,” he told the right-wing news site. A month later, Pugliese told members of the American Nuclear Society that FERC would work with the Trump administration to identify plants that are “critical” to maintaining the electrical grid, E&E News reported. His partisan comments unnerved former FERC Commissioner Jon Wellinghoff, an Obama appointee, who told The Hill, “It’s extremely unusual. It’s never happened in the history of the commission, to my knowledge.”

The comments were startling not only because of FERC’s role as a quasi-judicial regulator with substantial authority over administration policies, but because of the way they channeled Trump officials’ own talking points. In the latest coal and nuclear bailout proposal leaked in June, the federal government argued that national security concerns legitimized the Energy Department’s involvement in the marketplace. “Resources that have a secure on-site fuel supply,” which are, in effect, nuclear and coal power plants, “are essential to support the Nation’s defense facilities, critical energy infrastructure, and other critical infrastructure,” the memo states. This type of strategy would almost certainly increase rates for consumers and “pervert” what FERC’s role as a neutral arbiter has historically been, said Kim Smaczniak, the clean energy staff attorney at Earthjustice.

McNamee, who will likely be confirmed, has expressed public views that are far from resource-neutral. In an April op-ed titled, “This Earth Day, let’s accept the critical role that fossil fuel plays in energy needs,” McNamee extolled the virtues of oil and coal. “We have been told that fossil fuels are wrecking the environment and our health. The facts are that life expectancy, population and economic growth all began to increase dramatically when fossil fuels were harnessed.”

If Perry’s second proposal makes its way before the commission, McNamee may have a chance to boost the fossil fuel industries he claims are so vital to human achievement—and Trump will be one step closer to fulfilling his often-repeated campaign promise: to bring back “beautiful” coal.