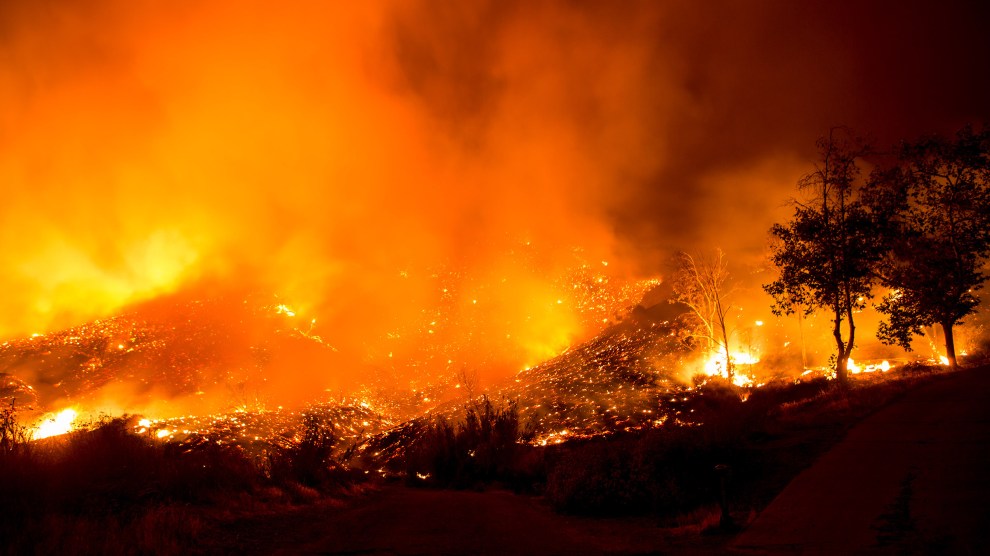 As Congress regroups after the midterms, the farm bill is back on the table. The legislation, which comes up for review twice every 10 years, funds agricultural programs in addition to food aid and conservation efforts. After failing to pass a new version of the bill before it expired in September—an impasse that effectively shut down a few programs covered in the bill—the Senate and the House are working to reconcile their different versions to try and pass something before the end of the year. But now the process is being held up by a debate over forest management.

The controversy surfaced as the Camp Fire devoured almost 160,000 acres in California. Earlier this month, President Donald Trump took to Twitter to blame the severity of the wildfires on inaction by the state government:

There is no reason for these massive, deadly and costly forest fires in California except that forest management is so poor. Billions of dollars are given each year, with so many lives lost, all because of gross mismanagement of the forests. Remedy now, or no more Fed payments!

During a press call about the fires last week, Agriculture Secretary Sonny Perdue and Interior Secretary Ryan Zinke suggested that House Republicans should use the farm bill to give the federal government more authority to do logging projects in federal lands without needing environmental reviews first. Zinke wrote an op-ed for USA Today in August that sheds light on his rationale: “When action comes, and we try to thin forests of dead and dying timber, or we try to sustainably harvest timber from dense and fire-prone areas, we are attacked with frivolous litigation from radical environmentalists who would rather see forests and communities burn than see a logger in the woods,” he wrote.

The House’s latest version of the farm bill, which passed with only Republican votes, would “authorize a categorical exclusion from requirements for environmental assessments and environmental impact statements for certain forest management projects.” It includes provisions to allow fast-tracked approval of logging projects, and more clearing of underbrush on federal lands.

Democrats, environmentalists, and scientists say that the measures go too far in removing environmental reviews. George Wuerthner, author of Wildfire: A Century of Failed Forest Policy, has more about this here. Senators Patrick Leahy (Vt.-D) and Chris Van Hollen (Md.-D) argue the provisions are a means of using a California tragedy to benefit the logging industry:

California is still trying to recover from wildfires—but members of the House GOP are trying to politicize this tragedy to get a sweetheart deal for big timber lobbyists. No way! It’s time to move ahead with a clean Farm Bill, which includes strong funding for the Chesapeake Bay.

Chad Hanson, the director and principal ecologist at the John Muir Project at the environmental nonprofit the Earth Island Institute, says Trump and Zinke are misleading the public on the impact of logging on wildfires. Cutting down trees won’t prevent future blazes, he says. “Forests with the fewest environmental protections burn the most intensely,” he argues, pointing to a previous study he’s done on the matter. “The more logging that happens, the hotter the fires burn and the faster they spread,” he said.

On top of that, the newly proposed provisions would eliminate some environmental analysis, which Hanson says would curb public discourse and keep people in the dark about logging’s impact on the environment and whether it was making fires better or worse.

As farm bill negotiations continue this week, some are saying that the bill is almost ready to go. The fight over work requirements for the Supplemental Nutrition Assistance Program (SNAP) has died down; new changes include crop insurance for newly-legalized industrial hemp, adjustments to dairy protections, and a measure to make Native American tribes eligible for agricultural disaster relief.

According to Politico’s Morning Agriculture newsletter, Senate Agriculture Chairman Pat Roberts continues to insist that negotiators are ‘close.'” In a press release, Senator Leahy expressed disappointment in the lack of bipartisan collaboration over environmental efforts in the bill: “It is outrageous that House Republicans and the Trump Administration are continuing to hold up the Farm Bill negotiations over harmful and extreme forestry provisions.”