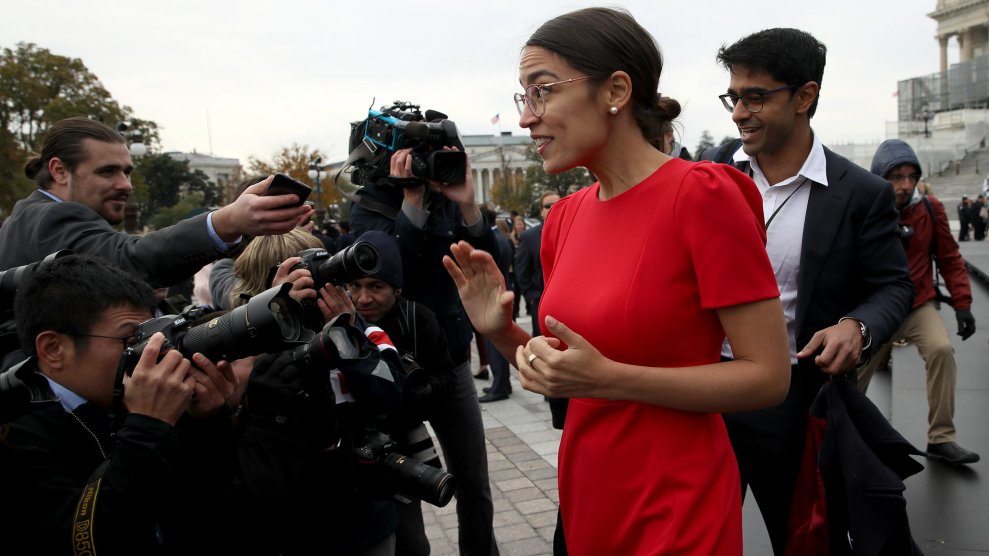 Representative-elect Alexandria Ocasio-Cortez (D-NY) answers questions from the press on the steps of the US Capitol.Win McNamee/Getty Images

Something weird is happening around climate change right now—and it’s not just that rising average temperatures are throwing our entire planet out of whack. Typically an issue politicians on both sides of the aisle avoid, climate has been a topic of heated conversation on the Hill ever since the Democrats took the House on Nov. 6. What gives?

The reinvigorated dialogue around climate is due, at least in part, to a group called the Sunrise Movement. Representative-elect Alexandria Ocasio-Cortez joined 150 Sunrise protestors in House Minority Leader Nancy Pelosi’s office last week for a sit-in to demand an economy-wide plan to address climate change. The activists and a small number of progressive Congressional Democrats (most of them newly elected), are pushing for something called a Green New Deal—kind of like the 1930s version but for green jobs. (Sunrise Movement cofounder Varshini Prakash was a member of the 2018 Grist 50.)

But if you think the plan went over well with everyone who understands climate change, you’d be mistaken. Many politicians on both sides of the aisle prefer a market-driven approach that could hypothetically garner bipartisan support. The activists argue that neither political party, especially not the Republicans, has come to the table with the kind of solution necessary to avert climate catastrophe. To that end, on Tuesday, Sunrise Movement members staked out Congressional representatives, like Democrats Barbara Lee of California and Jan Schakowsky of Illinois, to ask them for their support on a Green New Deal.

The protests shine a spotlight on the rebirth of two very different approaches to climate change solutions: sticking with compromise tactics, such as a carbon tax that can appeal to people on either side of the political spectrum, versus a balls-out, last-ditch effort to create a green America. Proponents of each think they have the more realistic approach. As we hurtle closer to a 2 degrees Celsius of warming, the split between these two groups is widening into a chasm.

One of the people rankled by the activists’ efforts to strong-arm Pelosi is Representative Carlos Curbelo of Florida, the Republican who co-founded a bipartisan climate change caucus in the House of Representatives two years ago (which earned him a spot on our 2017 Grist 50 list). This past Election Day, Curbelo lost his seat to a Democrat, Representative-elect Debbie Mucarsel-Powell. The Sunrise demonstrations still didn’t sit well with Curbelo, who called the protestors’ actions “truly deplorable.” In response, the young activists called him a phony.

.@carloslcurbelo thinks not wanting to die in the raging inferno of climate change makes us “deplorable”

This from the guy who:

Maybe that’s why we voted him out of a job in favor of @DebbieforFL 🤷🏽‍♀️#BoyBye https://t.co/caTx740hIl

There’s reason to think that Curbelo really believes his vision for reining in emissions is the right one. This summer, he introduced the Market Choice Act—a carbon tax that went approximately nowhere, but, as Curbelo said, laid the groundwork for similar taxes in the future. He was one of only a handful of candidates, blue or red, who ran midterm ads that mentioned his position on climate change. And he wasn’t shy about bringing up climate change on the Hill over and over again, even while the rest of his Republican colleagues ignored the issue and condemned solutions.

But Curbelo’s political legacy isn’t all green. He voted in favor of President Trump’s tax plan that opened up parts of the Arctic Refuge for oil exploration, took money from energy companies in his bid for reelection, and recently caught flak for calling people who made the link between hurricanes and climate change “alarmists.”

Curbelo says he plans on continuing his climate-related work after he steps down in January—and he’s still got his eye on a carbon tax. But Sunrise activists aren’t giving up either. Serious climate legislation won’t get through the Republican-controlled Senate for a long time. In the meantime, the Democratic Party has a choice: stick with its old, bipartisan approach (albeit now with fewer Republican moderates to reach to across the aisle), or break off from the middle like a piece of Arctic ice.

We might not have to wait long to see which road Democrats take. Capitalizing on the zeitgeist, Senator Bernie Sanders announced on Monday that he’ll host a town hall dedicated to climate solutions next month. The 90-minute event is meant to galvanize support for fundamental changes in America’s energy policy—exactly the kind of solution for which Sunrise and Ocasio-Cortez are gunning. If this keeps up, veteran politicians may soon be forced to confront an approach that has been, until now, safely sequestered on the sidelines.