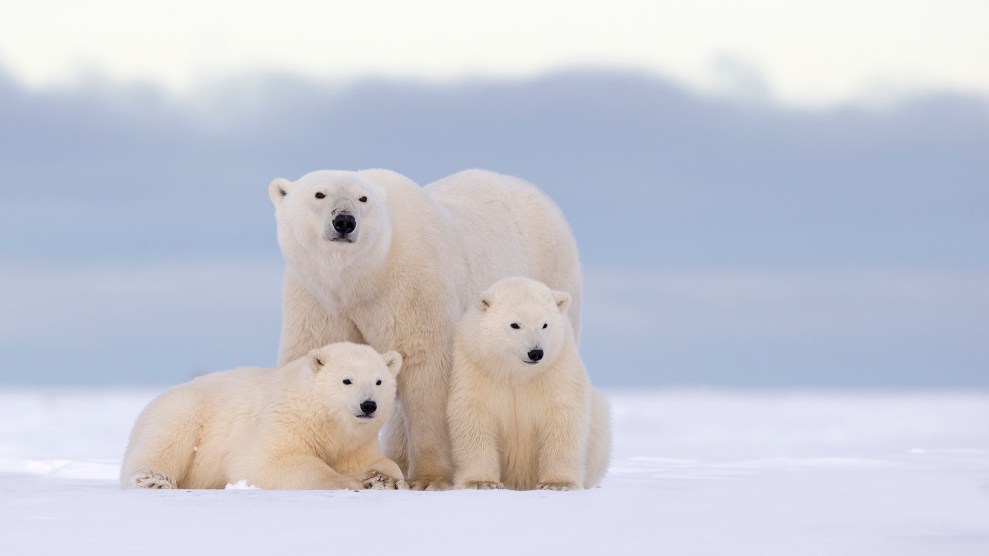 In an internal memo circulated within the Interior Department earlier this year, government scientists issued a stark warning: The Trump administration’s plans to allow oil exploration in Alaska’s Arctic National Wildlife Refuge (ANWR) could further jeopardize the region’s already fragile polar bear population. The document, authored in September by the head of the state’s US Fish and Wildlife Service office, noted that the threat posed to the bears could make it legally challenging for the agency to authorize a series of seismic surveys of the area’s petroleum reserves—even if steps were taken to mitigate the project’s environmental impact.

The memo, obtained by Mother Jones from a source outside the Alaska office, describes its finding as a “preliminary analysis” based on “information currently available to us.” That analysis contrasts sharply with the administration’s public rhetoric suggesting that the project would be harmless and should therefore be quickly approved.

“With as few as 900 of these animals remaining, even the death of one polar bear from fossil fuel development is too many,” said Jenny Keatinge of Defenders of Wildlife.

The surveys of ANWR’s coastal plain—which would require convoys of 30-ton thumper trucks equipped with massive off-road tires, along with hundreds of support vehicles and crew members—are expected to begin as early as January or February. The vehicles send low-frequency vibrations deep into the ground to assess oil and gas potential. This is the first step in opening up the wildlife refuge to fossil fuel development, which Interior Secretary Ryan Zinke has said is key to achieving the administration’s oft-stated goal of US “energy dominance.”

Despite the Fish and Wildlife Service document warning of serious environmental and legal obstacles to the project, the administration has continued to downplay the impact that seismic surveys could have on the refuge. FWS would not comment on the memo, but said that the application submitted by SAExploration—the company seeking to undertake the surveys—has since been revised and that the agency now intends to issue the necessary permits.

“Over the last several months the application has changed, and as a result, our analyses and findings have changed,” said FWS Alaska regional director Greg Siekaniec—the official who authored the original FWS memo—in an email. Siekaniec did not offer details on how the application had been modified to reduce the threat to polar bears, but said that information would be made available when the proposed authorization is published.

SAExploration did not respond to calls or emails to its Houston and Anchorage offices.

Any changes to the proposed surveys are unlikely to satisfy environmentalists, who argue that the original memo raises significant questions about whether the government can legally issue the required permits. “We remain skeptical that any combination of minimization and mitigation will avoid potential lethal impacts of seismic testing on polar bears,” said Jenny Keatinge, an analyst at Defenders of Wildlife who reviewed the memo. “We will examine the environmental analysis closely for any evidence that the Trump administration has cooked the books.”

In late July, the Bureau of Land Management announced that seismic surveys would likely have little or no impact on the region’s environment and sensitive species, including the Southern Beaufort Sea’s polar bear population, which has declined rapidly in recent years due largely to climate change. A BLM spokesperson told Alaska Public Media that because “there would be insignificant impact,” the Interior Department intended to forgo a time-consuming environmental impact statement and instead issue a less rigorous and much shorter analysis, known as an environmental assessment.

But then, the FWS—which, like the BLM, is part of the Interior Department—began sounding alarms. On September 6, Siekaniec sent his four-page memo stating that, according to the agency’s preliminary analysis, it would be virtually impossible to carry out the surveys without further jeopardizing the polar bear population.

That conclusion presented a major legal problem for the administration. Under the Marine Mammal Protection Act, the FWS can authorize what’s known as the “incidental taking” of polar bears—which includes activities likely to result in injury or death to the animals—only if doing so will have “no more than a negligible impact” on the species. If the bureau cannot make such a determination, the incidental take permit must be denied.

Even with mitigation measures in place, Siekaniec wrote, the effects on bears would likely be too great to allow seismic surveys in the coastal plain. Any oil exploration activities that could potentially injure bears “would likely further adversely affect the [Southern Beaufort Sea] stock of polar bears through effects on annual rates of recruitment or survival,” he noted. “If that is the case, we cannot conclude that the total taking will have a negligible impact on the SBS stock and must make a negative finding.”

The refuge’s coastal plain provides critical habitat for mother polar bears during the winter months when they come on shore to den and give birth. Bear cubs are especially sensitive during their first few months of life, and any disruption to their growth and development can be life-threatening. The denning period also happens to overlap with the only window during which seismic surveys can be carried out, since the ground must be frozen solid to allow for the passage of heavy vehicles and machinery. Even using the latest infrared technology, the FWS memo predicted that only about half of the bear dens would be detected during flyovers. That would leave approximately eight to 10 dens that would be susceptible to disturbances from vehicle traffic, human activity, and seismic work.

The threat is compounded by global warming. As sea ice loss has accelerated, more and more bears are coming inland, creating additional pressure on the population. Steve Amstrup, a former US Geological Survey researcher and chief scientist at Polar Bears International, said the Interior Department hasn’t fully considered the challenges facing the Southern Beaufort Sea population. “If we don’t stop the decline of sea ice, polar bears are going to disappear,” he said.

“This document confirms that oil and gas exploration would cause injury and death to mother bears and cubs that would threaten the survival of the Southern Beaufort Sea population,” Keatinge said.

Since the mid-1980s, the region’s polar bear population has declined from an estimated 1,800 animals to between 800 and 900. In order to sustain the population, the FWS memo says no more than 14 polar bears can be removed annually. But on average, more than 30 bears are already killed every year—largely for subsistence purposes by native people in Alaska and Canada, an activity that is protected by law. In other words, the population is in such a precarious state that the taking of even one additional bear would likely exceed the legal threshold, according to the FWS memo. Based on initial information, the memo estimated that seismic surveys could result in death or injury to an additional 15 bears.

“This document confirms that oil and gas exploration would cause injury and death to mother bears and cubs that would threaten the survival of the Southern Beaufort Sea population,” Keatinge said. “With as few as 900 of these animals remaining, even the death of one polar bear from fossil fuel development is too many.”

The memo considered mitigation measures—such as more frequent aerial passes to search for dens and spatial or temporal restrictions on seismic activities—but concluded that these were unlikely to be sufficient.

The memo also appears to undermine the BLM’s assertion that an environmental assessment can be published with a draft Finding of No Significant Impact—known by the acronym “FONSI”—and still pass legal muster. Under the National Environmental Policy Act, if such a finding cannot be made, then a more detailed environmental impact statement must be completed before the seismic surveys can begin.

“Assuming FWS has relayed this information to BLM, it’s hard to figure out how they can issue a FONSI,” said one former FWS official who asked not to be identified.

The Interior Department, which oversees both agencies, did not respond to detailed written questions for this story.

The memo already appears to have delayed the BLM’s publication of its environmental assessment, which was initially due out as early as September 10. The former FWS official, who is familiar with the deliberations over the memo, said that it “pretty much blew things up.”

Language included in the 2017 Republican tax bill that opened the refuge to oil and gas exploration designated the BLM as the lead agency on the project, even though the FWS manages the refuge. This has led to tensions between the two agencies and concerns that the BLM is cutting corners in order to expedite the surveys in advance of possible lease sales next summer. BLM employees have also raised concerns about the expedited environmental review process.

Seismic surveys were last conducted in the refuge in the mid-1980s and have left visible scars along the tundra. In an op-ed in the Anchorage Daily News, Donald Walker, a biology professor at the University of Alaska, argued that the decision to rely on an environmental assessment and not a more thorough environmental impact statement was an “act of negligence of BLM’s responsibility.”

But despite the concerns, officials are pressing ahead. The information obtained in the surveys would be instrumental in determining whether companies decide to lease parcels in the remote region, which is very expensive to develop and politically risky. Republicans are eager to lock in leases before the end of President Donald Trump’s first term, when a change in administration could undermine or even reverse the effort. The FWS memo notes that oil and gas drilling in ANWR is “a high priority to the Administration and the Alaska Congressional Delegation.”

The FWS is expected to issue a draft permit for the surveys in the coming weeks, which Siekanic told Mother Jones would be “part of a robust, transparent public process.”

The agency declined to provide additional details on the terms of the agreement and said it was awaiting more information from the company before finalizing the proposed permit. According to an Interior source who asked not to be identified, the BLM and the FWS have been discussing provisions that would, among other things, require SAE to reverse the direction of its work in order to complete its surveys of the densest denning areas before bear cubs emerge.

But environmental advocates aren’t convinced such mitigation measures will be adequate. And they’re prepared to file a lawsuit.

This article was reported in partnership with The Investigative Fund at The Nation Institute.