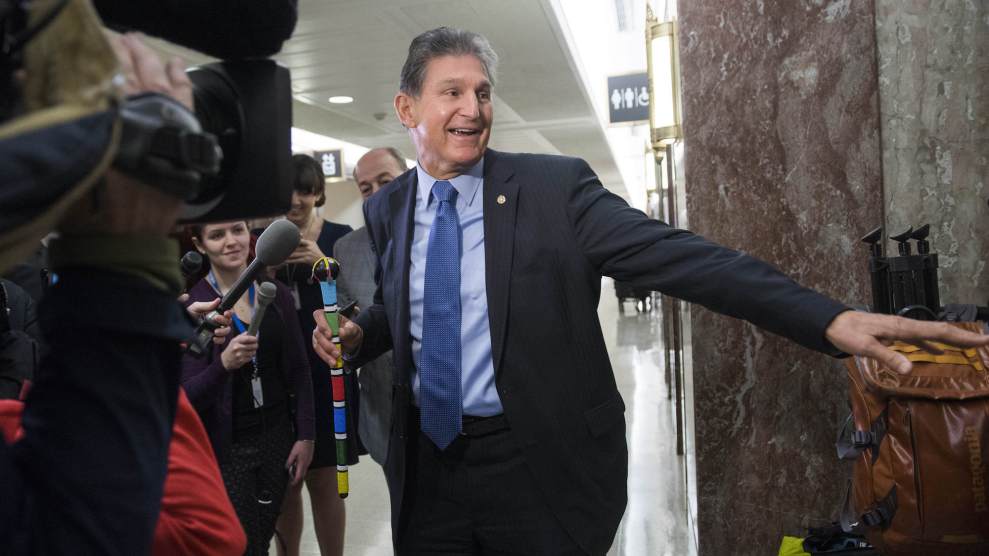 Senate Minority Leader Chuck Schumer released a list of committee assignments Tuesday that brought bad news for environmental activists: Joe Manchin, the pro-coal West Virginia senator who narrowly held onto his deep-red seat this November, will now be the highest-ranking Democrat on the Energy and Natural Resources Committee.

In his new role, Manchin isn’t likely to be a strong advocate for reining in fossil fuel use to combat climate change; he once went so far as to shoot a bullet through Democrats’ failed cap-and-trade legislation in a campaign ad. While Manchin does say we “have the responsibility and capability to address” climate change, he has taken nearly $750,000 in donations from the mining industry and more than $419,000 from the oil and gas industry during his Senate campaigns, according to the Center for Responsive Politics.

“The problems facing our country are serious, and I am committed to working with my colleagues on both sides of the aisle to find common sense solutions for long-term comprehensive energy policy that incorporates an all-of-the-above strategy and ensures our state and our nation are leaders in the energy future,” Manchin said in a statement on his promotion.

Energy and Natural Resources isn’t the primary committee dealing with climate change and environmental oversight (that would be Environment and Public Works) or comprehensive climate legislation (either EPW or Finance). But it still plays an important role in overseeing public lands, energy infrastructure, and the electrical grid. While strong climate action is a nonstarter in the Republican-controlled Senate, the ranking member can set the agenda for messaging and investigations—duties that will become even more important if Democrats manage to take control of the chamber in 2020 and Manchin assumes the chairmanship.

“I have concerns, and that’s why I say that our issues are not just left and right, but that they’re top and down,” incoming Rep. Alexandria Ocasio-Cortez of New York said at a press conference a few weeks ago outside the Capitol. “I have concerns over the senator’s chairmanship just because I do not believe that we should be financed by the industries that we are supposed to be legislating and regulating and touching with our legislation.”

Climate activist Bill McKibben, co-founder of 350.org, tweeted: “Truly depressing, at a key moment in earth history, to see Joe Manchin take over as ranking member on the Energy Committee.” McKibben’s group was one of the climate advocacy groups targeting Schumer with protests in an attempt to convince him to disregard Senate tradition and choose someone else.

In a system where senators are promoted based on seniority, it’s relatively surprising that the eight-year senator was next in line for ranking member after Washington state’s Maria Cantwell, the current top Democrat, moved to replace departing Sen. Bill Nelson (D-Fla.) on the Commerce, Science, and Transportation panel.

Three other senators could have claimed the post, including Sens. Ron Wyden (D-Ore.) and Debbie Stabenow (D-Mich.), but they wanted to keep their ranking slots on the Finance and Agriculture committees, respectively. Sen. Bernie Sanders (I-Vt.), meanwhile, chose to keep his post as the ranking member of the Budget Committee. Sanders is a 2020 presidential hopeful who plans to stake out an aggressive position on climate change. At a recent town hall, he described global warming as an urgent problem. “This is a crisis situation,” he said. “It is unprecedented, and we’ve got to act in an unprecedented way.” His staff argues that the Budget Committee can play a key role in climate legislation through the reconciliation process, which could allow a future Democratic majority to avoid a Republican filibuster.

“Senator Manchin and I have spoken on this subject, and I expressed to him my expectation that now he and all Senate Democrats must hold the line against Donald Trump’s dangerous environmental policies,” Inslee added.

Billionaire megadonor Tom Steyer, who trailed only Sheldon Adelson and Michael Bloomberg among this election cycle’s top givers, had also called on Democrats to pursue “a bold, positive path forward” on climate change—one that pointedly does not include Manchin. “Senator Manchin does not offer that vision and should not be the Democratic leader on the Senate Energy and Natural Resources Committee,” Steyer said in a statement last week.

The intra-party feud has done little to undermine Manchin’s support among Senate Democrats. “He may be the ranking member, but he’s part of a team when it comes to issues of climate change, issues of the environment,” Sen. Cory Booker (D-N.J.) told Politico last Thursday. “I have a lot of confidence I can work with him to fight for a far more aggressive agenda for dealing with the planetary crisis of global warming.”