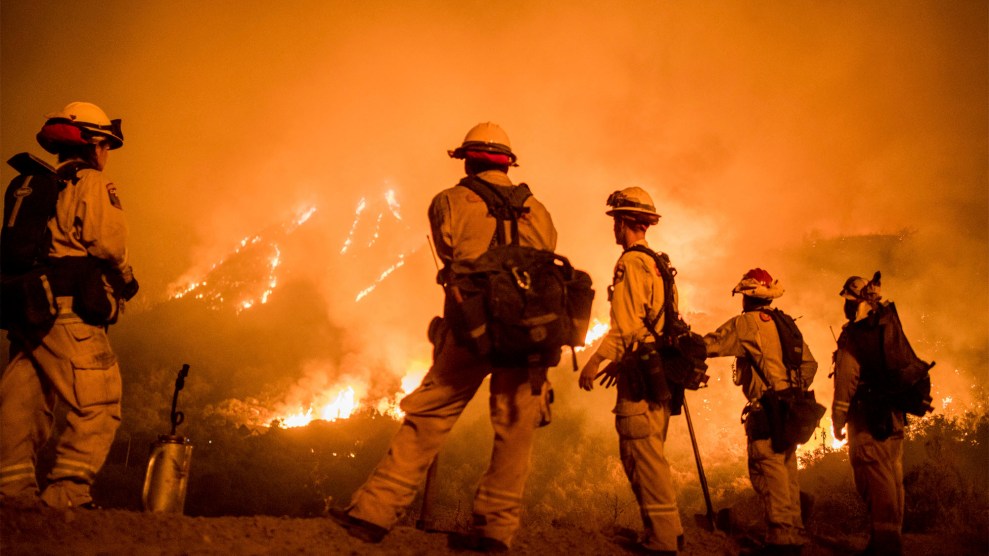 Firefighters watch as the 18,137 acre Holy Fire burns around them for the fourth day in Lake Elsinore, California in the early morning on August 10, 2018. Christian Monterrosa/Sipa USA via AP

In a remarkable and unique hour of television, NBC News host Chuck Todd devoted an entire episode of “Meet the Press” on Sunday to discussing the dangers of climate change. “This morning, we’re going to do something that we don’t often get to do, dive in on one topic,” Todd said, calling climate change “a literally earth-changing subject that doesn’t get talked about this thoroughly, at least on television news.”

The Sunday talk shows, and cable news more broadly, have routinely ignored the threat of climate change. And, when these shows do cover the issue, they usually feature industry-funded climate denialists who peddle falsehoods about global warming. Todd’s show was a rare and refreshing departure from that approach.

“We’re not going to debate climate change, the existence of it,” he said. “The Earth is getting hotter. And human activity is a major cause, period. We’re not going to give time to climate deniers. The science is settled, even if political opinion is not.”

His guests, which included former California Gov. Jerry Brown, former New York City Mayor Michael Bloomberg, Republican Rep. Carlos Curbelo from Miami, and a panel of scientific experts, all agreed that climate change was a huge threat to the planet.

“We need to stop covering the debate and start covering the story, so that people see that this is real, and so that politicians take a more-pragmatic approach and find solutions that are actually achievable,” Curbelo said, noting that his hometown of Miami floods once a month from rising tides and is projected to one day become underwater.

WATCH: How do we explain the urgency of climate change? #MTP

Despite the dire warnings about climate change from the scientific community, President Donald Trump has withdrawn from the Paris climate agreement, rolled back historic environmental regulations, and filled his administration with oil and coal industry lobbyists.

“He is very convinced of his position,” Jerry Brown said of Trump. “And his position is that there’s nothing abnormal about the fires in California or the rising sea level or all the other incidents of climate change.”

The administration tried to bury a 1,600-page report from 13 federal agencies outlining the catastrophic ramifications of climate change by releasing it a day after Thanksgiving. That weekend, all five Sunday talk shows covered climate change at the same time for the first time all year, but many featured climate skeptics, including Chuck Todd, who invited on Danielle Pletka of the American Enterprise Institute and GOP Sen. Mike Lee (R-UT), who attempted to dispute the scientific consensus behind climate change. Sunday’s show was a stark contrast to that.

However, the other Sunday talk shows featured the usual mouthpieces for the Trump administration. On CNN’s “State of the Union” with Dana Bash, White House counselor Kellyanne Conway defended Trump’s tweet blaming Democrats for the deaths of two migrant children in US Border Patrol custody.

“Dana, the President would like the Democrats to be in 2019 who they’ve been in 2006 with the Secure Fences Act…Where are they now?” Conway said.

Counselor to the President Kellyanne Conway: “The President would like the Democrats to be in 2019 who they’ve been in 2006 with the Secure Fences Act … Where are they now?” #CNNSOTU https://t.co/3atpN5a2w5 pic.twitter.com/EP9lvI5ASA

Bash attempted to set the record straight. “It’s also important to note that the president tweeted not just that Democrats are responsible but that [the children] were ill before they were coming over and his own government and the CBP has said in several statements that they tracked them and that that’s not the case.”

“I don’t like some of the Democrats using these deaths as political pawns,” Conway responded.

“Isn’t that exactly what the president just did?” Bash asked.

“No, the president is not doing that,” Conway said.

Bash’s pushback was not enough to stop the administration from peddling its usual talking points and falsehoods. Unfortunately, Conway’s appearance was more typical of the Sunday shows than Todd’s deep dive into climate change.