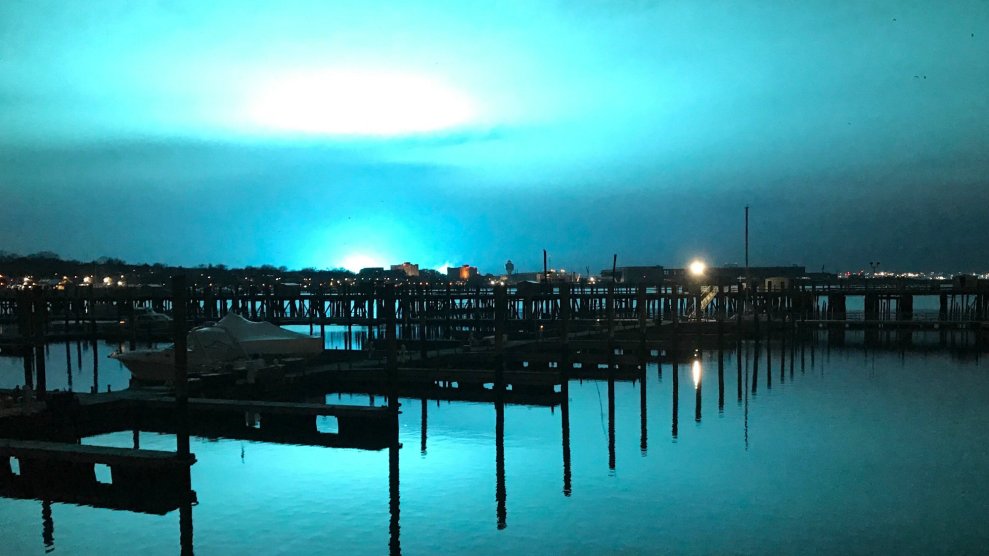 This densely-populated area of northwestern Queens provides nearly half the city’s electricity from aging plants that burn number 6 fuel oil, a thick, viscous oil blend considered one of the most polluting energy sources in the world.

The Astoria Generating Station, where the explosion occurred around 9 p.m., burns 3,039,000 gallons of number 6 fuel oil a year. The Ravenswood Generating Station, the towering four-smokestack facility on the East River in Long Island City, burns another 3,264,000 gallons per year and was ranked as the state’s largest carbon polluter in 2014.

The New York City Department of Health found higher air pollution levels in Astoria and Long Island City than the rest of the borough or city. According to the city’s most recent community health report for the neighborhoods, the levels of PM2.5—the most harmful type of particulate matter, fine-grain pollutants that wedge into lungs when inhaled—hit 8.9 micrograms per cubic meter. That compared to 8.4 micrograms per cubic meter in Queens overall and 8.6 citywide.

Local officials have long blamed the plants for higher levels of asthma, and last year the city council passed a bill requiring the utility operators to stop using fuel oil number 6 by 2020 and number 4 oil by 2030. Transformers can malfunction regardless of the fuel source. But the explosion on Thursday night could add new pressure to go further, phasing out fossil fuel use altogether and converting the stations to renewable sources.

“This is a very old and very polluting power plant that should have been shut down quite a while ago,” Judith Enck, the former Environmental Protection Agency regional administrator for New York, told HuffPost late Thursday. “It’s a reminder that New York needs to accelerate efforts to phase out fossil fuels.”

Standing outside the gates of the Astoria Generating Station on Thursday night, state Sen.-elect Jessica Ramos, one of the insurgent Democrats who ousted a conservative incumbent in last month’s election, vowed to co-sponsor the Climate and Community Protection Act (CCPA) next year.

The bill, first introduced in the Assembly in 2016, mandates that New York switch to 100 percent renewable energy by 2050. For two years, the Senate’s Republican majority refused to vote on the bill even as it repeatedly passed in the Assembly, and Gov. Andrew Cuomo (D), who has deep ties to the fossil fuel industry, declined to champion the legislation.

But Ramos, who last week attended a packed town hall in Jackson Heights to encourage Spanish-speaking voters to speak out about climate change and environmental issues, called the bill “a huge priority” for the new Democratic majority that “will definitely come up next year.”

“We need to flip everything on its head and rethink the paradigm of exactly how it is that the city of New York and the state of New York is thinking about our future consumption of energy.”

“None of these things happen in a vacuum,” Ramos said as police vehicles and Consolidated Edison trucks sped past a crowd of TV crews. “We need to flip everything on its head and rethink the paradigm of exactly how it is that the city of New York and the state of New York is thinking about our future consumption of energy.”

The CCPA is far from the only effort to stoke debate over New York’s energy use and climate pollution. The push to shutter dirty power plants goes back years.

In 2011, officials closed the Charles Poletti Power Project, a three-decade-old plant in Astoria that was once considered the city’s worst polluter. The Queens’ Times-Ledger noted that it was “the prime reason western Queens … was nicknamed Asthma Alley.”

Earlier this month, city lawmakers introduced a landmark bill to cut emissions from buildings of more than 25,000 square feet, the city’s biggest source of carbon pollution. The legislation would be the first of its kind in any major city, and would likely set a new standard for metropoles under pressure to reduce emissions as climate change worsens. The bill’s proponents pitched it as a first step toward what they call a “Green New Deal for New York City”—a nod to the national effort by progressives to pass sweeping economic and energy reforms and end fossil fuel use in the next decade.

Two weeks ago, New York City Comptroller Scott Stringer announced a “significant next step” in divesting the city’s $200 billion pension funds of oil and gas as he issued a request for a proposal to analyze the city’s fossil fuel risks.

New York generates just 5 percent of its electricity from wind or solar. In a sweeping policy speech this month outlining a progressive third-term agenda, Cuomo pledged to move the state to 100 percent carbon-free electricity by 2040. But despite his allusion to a Green New Deal, the Cuomo administration is still considering new pipeline projects that environmentalists say puts fragile ecosystems at risk and threatens to prolong the state’s reliance on fracked gas from Pennsylvania and elsewhere.

For Daniela Lapidous, a Brooklyn-based renewable energy activist who spent much of the past year bird-dogging Cuomo and urging him to back the CCPA, the transformer explosion on Thursday hit home. After seeing images of the electrical fire online, Lapidous began frantically texting friends in Queens.

“I was just so worried about everyone I know who lives nearby,” Lapidous said by phone Thursday night. “I don’t think it should be normal to fear that the way we provide energy endangers the people we love.”

“Fossil fuels cause so much danger from climate change and air pollution,” she added, “but freak accidents like this go to show that moving our energy system to 100 percent renewables is the only way to minimize the threat.”