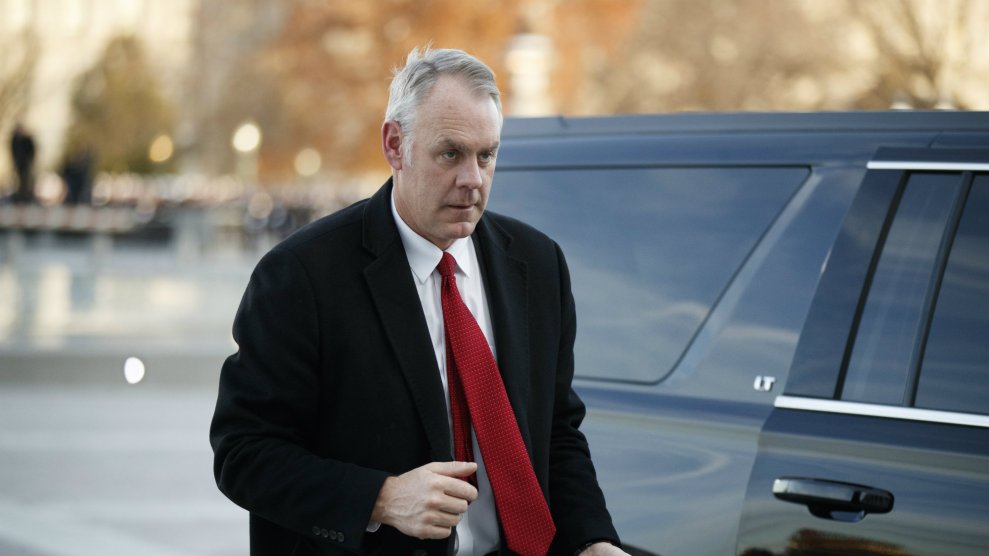 In his latest attempt to make the Interior Department’s activities less transparent, Ryan Zinke shifted responsibility for handling public records requests from a career employee to a political appointee with a long history working for conservative megadonors Charles and David Koch. The order, signed November 20, was first noticed by the Center for Biological Diversity, an environmental advocacy group that has previously sued the Trump administration for not releasing information pertaining to its planned rollback of the Endangered Species Act.

“Zinke is politicizing Interior’s Freedom of Information Act process to deny the public access to information and hide the oil industry’s dirty secrets,” Meg Townsend, the Center for Biological Diversity’s open government attorney, said in a statement. “With a Koch crony in charge of records requests, the department will work in darkness. Public records that might shame Zinke or big polluters will be covered up, and our public lands and wildlife will suffer.”

Instead of the department’s chief information officer fielding and responding to Freedom of Information Act requests—as has been the case previously—Zinke assigned the task to acting solicitor Daniel Jorjani, who had advised the Koch brothers in several roles, including as director of research at the Charles Koch Institute. Jorjani has been acting solicitor since President Trump’s inauguration, because the Senate has not confirmed a White House appointee as Interior’s main solicitor. (Trump nominated Ryan Nelson, now a judge on the Ninth Circuit Court of Appeals, but his case never advanced in the Senate.)

Under Jorjani’s watch, the department released two legal opinions that have dramatically rolled back wildlife protections to the benefit of oil and gas firms, including an interpretation of the century-old Migratory Bird Act—designed to prevent the pursuit or capture of migratory birds—that prevents Interior from penalizing oil, gas, and solar companies that accidentally kill birds. The Obama administration had authored this opinion days before Trump took office, making it possible for energy operators to be held legally liable for accidentally harming birds.

In recent months, Jorjani has developed a reputation as a “troubleshooter” who is willing to meet frequently with industry representatives who have business before the Interior Department. In the months before he issued his opinion on the Migratory Bird Act, Jorjani took “no fewer than two dozen” meetings with trade groups, industry lobbyists, and other officials, including several with an economic interest in gutting protections for migratory birds, according to emails and public records analyzed by Pacific Standard.

Now that Jorjani is in charge of responding to public records requests submitted to Interior, advocacy groups believe he will further obstruct the process of obtaining public records from Zinke’s embattled department. Since May 2017, Interior has only fulfilled 10.53 percent of the FOIA requests submitted by the Western Values Project, a Montana-based environmental advocacy group. In partnership with two other groups, Democracy Forward and American Oversight, WVP sued Interior twice over outstanding FOIA requests related to deputy secretary David Bernhardt and whether Zinke complied with certain ethics rules. More than 130 public records requests, including some that are 18 months-old, “are still outstanding,” a spokesperson for the group said in an email to Mother Jones.

Last December, Zinke drew headlines for adding a cloak of secrecy to another formerly apolitical process: the approval of federal grants. He ordered Steven Howke, a high school football teammate of Zinke’s with no prior government experience, to review any grant applications above a $50,000 threshold.