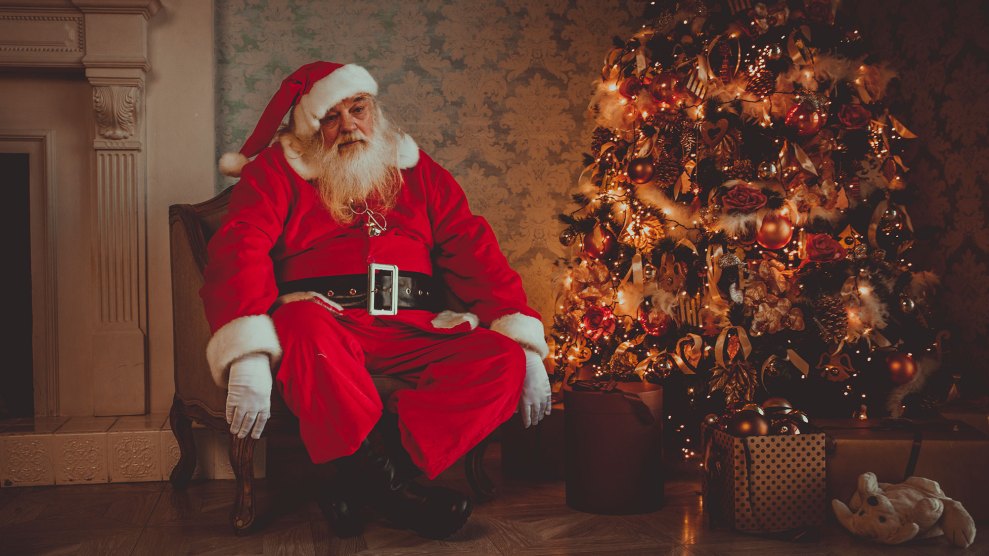 Around Christmastime 2009, an Australian public health researcher launched a new field of inquiry with an article in the British Medical Journal titled “Santa Claus: A Public Health Pariah?” The piece, which examined the potential, um, clausality between St. Nick’s personal health and that of his believers, was the first entry in a recent body of facetious medical research that has diagnosed the jolly fellow as fat, old, and stuck in a job that could kill him. In short, everything that makes Santa, Santa is bad for him (and you).

Here’s a review of the literature of Santa-ology:

Ever since a “chubby” Santa came down the chimney in “A Visit from St. Nicholas,” he has appeared to be, as one paper puts it, “plump to obese.” While researchers have not ascertained Santa’s exact weight or body mass index, there is consensus that he’s in the unhealthy range. As a 2016 article in JAMDA: The Journal of Post-Acute and Long-term Care Medicine details, Santa’s bulk makes him prone to fatigue, sleep apnea, diabetes, hypertension, coronary artery disease, hypertriglyceridemia, and nonalcoholic fatty liver disease. Furthermore:

Given his obesity, it is quite likely that while flying over the Pacific or Atlantic oceans in his “miniature sleigh,” his inability to move (similar to what we experience flying coach in modern airlines) will result in deep vein thrombosis and a pulmonary embolus leaving the sled to fly aimlessly through the sky until Rudolph and the exhausted reindeer crash into the ocean.

An extremely specific article in the British Columbia Medical Journal in 2012 reported Santa’s lipid profile (not good). It also imagined this graphic journey into the workings of his gastrointestinal tract:

Santa’s recent colonoscopy (ordered because of abdominal bloating and bleeding caused by hemorrhoids) showed only diverticulosis… An abdominal ultrasound, ordered after a young locum felt stool in Santa’s colon through his diastasis of the rectus abdominus and thought he may have an AAA [abdominal aortic aneurysm], showed only NASH [nonalcoholic steatohepatitis].

Arguably, Santa is in pretty good shape considering all the free food and booze he consumes. No one has calculated Santa’s total caloric intake from the traditional offerings he receives around the world, which include fruitcake, mince pie, porridge, sherry, and brandy. Yet a recent article in the Central European Journal of Medicine calculated that Santa takes in 9.9 billion calories on Christmas Eve from cookie-and-milk consumption in the United States alone. The author ruled out an unusually fast metabolism or bariatric surgery as the reason for Santa’s apparent ability to keep off the tons. And the geriatrician who wrote the JAMDA article also pointed out that “when we are older a higher body mass index is slightly protective against death.”

Santa’s jollity in spite of his “little round belly” has been subject to debate. In “Santa Claus: A Public-Health Pariah?”, author Nathan Grills noted a correlation between “countries that venerate Santa Claus and have high levels of childhood obesity.” While he found no evidence of a link between Santa’s waistline and overweight kids, he added that “there is a temporal pathway whereby Santa promotes a message that obesity is synonymous with cheerfulness.” In a letter responding to Grills in the British Medical Journal, an obesity researcher hypothesized that “Santa may be a metabolically healthy obese.” Another correspondent asserted, “To be very old and obese, yet cheerful and jovial, it must mean that Santa must be very healthy.”

Santa’s over the hill

Santa is thought to be somewhere between 180 and 1,700 years old. The literature assumes he is similar to a Baby Boomer; one study describes him as “a more or less old grandpa above the age of 65.” The effects of aging are probably catching up with him. “It is recognized that over the age of 50 years, older persons tend to have trouble with shift work,” JAMDA observed. “In addition, older workers are more likely to be injured on the job.” And the authors of a 2015 article in the Journal of Occupational Medicine and Toxicology noted that “It is unclear whether Santa has ever been offered a workplace health promotion program geared towards helping older workers remain productive and contributing members of the workforce.”

A study published in the journal Gait and Posture in 2014 asked whether Santa’s age, combined with the physical and cognitive burdens of his job, could make him susceptible to an “elevated fall risk profile.” To answer this, researchers measured the spatio-temporal gait characteristics of 17 men dressed in full Santa costume while carrying 44-pound bags of toys. To reduce Santa’s risk of falling, the researchers recommended stretching his Christmas deliveries over several days. The authors of the JAMDA article were more blunt, asserting that it is time to “quietly retire Santa to his rocking chair in his nursing home in the North Pole.”

Santa has an unusually demanding and dangerous job. As the Gait and Posture study put it, “Steering a sleigh with high velocities (just below light speed), carrying heavy weights, motivating reindeer and managing a tight delivery schedule require a physical conditioning that is nothing short of a Greek God.” (Let’s ignore the 1991 Spy article that calculated that the extreme aerodynamic and centrifugal forces of this midnight flight would “kill Santa instantly…turning him into pink goo.” Likewise, let’s overlook the compelling evidence that Santa is, in fact, a god.)

Statistically, Santa’s job is an accident waiting to happen. If his sleigh had a safety record similar to that of a commercial airplane, he should have died four times in the past 180 years, according to an article published in Advances in Integrative Medicine in September. So far he’s beaten the odds, despite his vehicle’s lack of seatbelts, airbags, or “sleigh-mounted radar-based collision systems,” as noted in the Journal of Occupational Medicine and Toxicology. At the very least, a writer at the National Institute for Occupational Safety and Health wondered, “Maybe we should help Santa equip his sleigh with a roll-over protection device?”

The Journal of Occupational Medicine and Toxicology observed that as “a shift worker who works a significant amount of seasonal overtime,” Santa desperately needs more work-life balance. Additionally, he likely suffers severe jet lag from covering 24 time zones in just 36 hours (due to the International Date Line), and may be compensating by popping melatonin, caffeine, or prescription drugs.

Santa faces other occupational hazards. With his exposure to sick children, he could become a vector for less joyful tidings, Grills wrote: “The potential for Santa in his asymptomatic phase to propagate an infectious disease is clear.” A letter in this month’s Journal of the European Academy of Dermatology and Venereology details the various skin ailments Santa may suffer due to his on-the-job exposure to the elements, including chilblains, roscacea, helioderma, cold panniculitis, and seborrheic dermatitis. He’s also at risk of developing an allergy to reindeer epithelium, and his repeated contact with chimney soot raises his chances of getting scrotum cancer.

Is any of this affecting Santa’s job performance? When it comes to spreading holiday cheer, he’s still got it. Based on an analysis of 38,000 survey responses from 21 countries, a paper in the Journal of Mental Health last December hypothesized that there is a “Santa Claus effect” that spreads jollity to his “entire network of influence, which includes all residences around the world to which he delivers gifts.”

Yet Santa’s ability to discern which children deserve Christmas presents may be faltering, according to a 2016 study in the British Medical Journal. It found that Santa visited sick children in British hospitals regardless of local levels of school attendance and juvenile crime, suggesting an inability to discern naughty from nice. A 2012 article in the Industrial-Organizational Psychologist observed numerous problems with “Santa’s current child performance management system.” It recommended that he implement a more transparent online-based system that would “reduce his risk exposure to litigation but also result in a more fair and accurate system leading to improved child behavior.”

Despite Santa’s professional faults, an overwhelming majority of hospital patients under the age of seven report a belief in him, according to the Canadian Medical Association Journal. And there is ample anecdotal evidence that children who celebrate Christmas are still receiving their presents in a timely manner, suggesting that Santa can still handle the challenges of his job. Nonetheless, he may want to get help for that “making a list and checking it twice” thing: The Journal of Occupational Medicine and Toxicology notes that it may be a sign of a stress-related compulsion disorder.