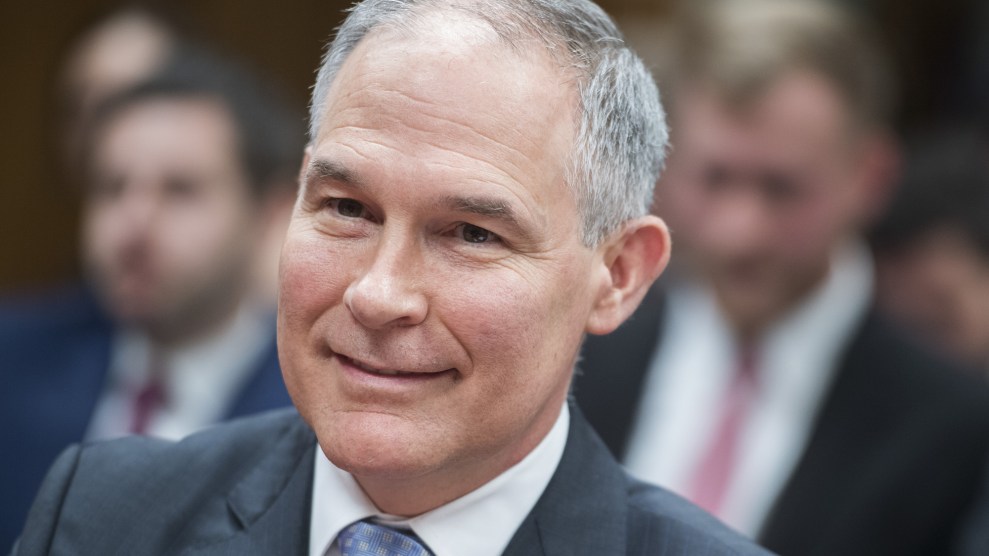 “Where’s Scott Pruitt now?” is a question I’ve gotten a lot in the six months since the former Environmental Protection Agency administrator resigned under a mountain of investigations into possible ethics violations.

If you know anything about Pruitt, the answer will not come as a huge surprise: He’s pitching himself as a kind of unique messenger for advancing the industry interests that, until very recently, he was responsible for regulating. The man who found his bigger political ambitions derailed by a penchant for first-class flights, an extensive security detail, hotel hand lotion, and Trump mattresses, has turned over a new leaf as a private sector consultant. He is consulting for coal baron, Trump donor, and longtime friend Joseph Craft, while sidelining as an energy consultant and a paid speaker, as he shuttles back and forth between Washington and Tulsa, Oklahoma, where he has lived for years.

In an interview with the Washington Post for a profile of Pruitt’s post-EPA life, his lawyer Cleta Mitchell maintained that Pruitt is steering clear of EPA business, sticking to a five-year ban on lobbying the agency.  “He has discussed multiple opportunities with me and has been quite careful not to do anything that is even close to the line—and to ensure he is in full compliance with both the letter and the spirit of the law,” she said.

But he is meeting with interests that lobby the EPA on a regular basis. Pruitt reportedly met with the National Association of Manufacturers in October, though NAM said he is not retained in an official capacity. NAM has lobbied for a number of the rollbacks of environmental regulations, including on the Clean Power Plan, that first started under Pruitt and have continued under his successor, former coal lobbyist Andrew Wheeler.

With the exception of a few years of private practice and his co-ownership of an Oklahoma minor league baseball team, Pruitt has spent much of his life as a government official. But he earned negative headlines for living a more lavish life than that salary afforded, such as taking first-class flights on government business. Pruitt was financially strained with a $1.2 million mortgage in Tulsa, and enlisted EPA staff to try to find his wife work, such as possibly opening a Chick-fil-A franchise.

His rising legal fees from the Inspector General investigations added up to somewhere between $100,00 and $300,000. A filing released this month showed that Republican donor Diane Hendricks, a billionaire businesswomen and economic adviser on Trump’s 2016 campaign, donated $50,000 to the “Scott Pruitt Legal Expenses Trust.”

The common thread throughout Pruitt’s entire career is how he’d use every position to build himself a bigger platform. His record suing the EPA as Oklahoma attorney general led him to the Trump administration, and while the EPA cut his political ambitions short, it seems to have set him up for lucrative jobs in the energy industry. Even when he wasn’t working in the government, he sought to build connections that would help him down the road. As I noted in my profile this year, Pruitt’s decision to purchase a baseball team in Oklahoma boosted his political ambitions by cementing relationships with the business elite and oil industry.

Come January, House Democrats will have subpoena power and could potentially use it to demand documents from the EPA regarding many of the unresolved issues surrounding investigations into Pruitt, including his first-class flights.