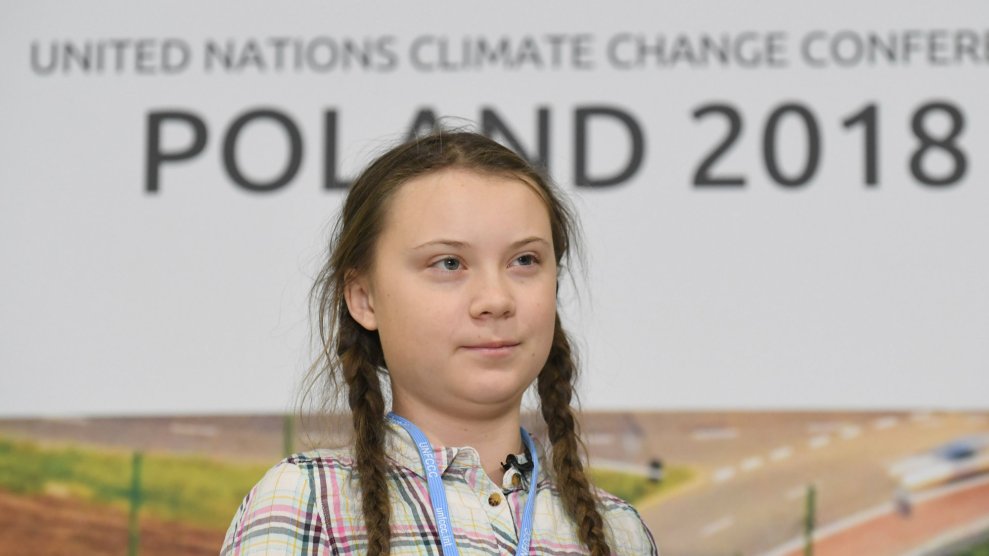 Greta Thunberg, a 15-year-old Swedish climate activist, began a school strike over climate change that has now spread to Australia, the US, Japan, and other countries.Janek Skarzynski/AFP/Getty Images

Action to fight global warming is coming whether world leaders like it or not, school student Greta Thunberg has told the UN climate change summit, accusing them of behaving like irresponsible children.

Thunberg began a solo climate protest by striking from school in Sweden in August. But more than 20,000 students around the world have now joined her. The school strikes have spread to at least 270 towns and cities in countries across the world, including Australia, the United Kingdom, Belgium, the US and Japan.

“For 25 years countless people have come to the UN climate conferences begging our world leaders to stop emissions and clearly that has not worked as emissions are continuing to rise. So I will not beg the world leaders to care for our future,” she said. “I will instead let them know change is coming whether they like it or not.”

“Since our leaders are behaving like children, we will have to take the responsibility they should have taken long ago,” she said. “We have to understand what the older generation has dealt to us, what mess they have created that we have to clean up and live with. We have to make our voices heard.”

The conference of nearly 200 nations is taking place in Katowice, Poland, and its main task is to turn the vision of tackling global warming agreed in Paris in 2015 into concrete action. On Monday, Sir David Attenborough told the summit that without action “the collapse of our civilizations and the extinction of much of the natural world is on the horizon”.

Thunberg, who had a meeting with the UN secretary general, António Guterres, on Monday, said: “What I hope we achieve at this conference is that we realize that we are facing an existential threat. This is the biggest crisis humanity has ever faced. First we have to realize this and then as fast as possible do something to stop the emissions and try to save what we can save.”

On Tuesday, Guterres said: “Our younger generations will have to help drive, and complete, the work we start today. We need to harness their energy, invention and political power to raise climate ambition.”

Toby Thorpe, a school student from Hobart, Tasmania, who took part in the recent school strikes in Australia and is also at the UN summit, said: “We are in this together. Together we are strong and we will not give up.” Australia’s resources minister, Matt Canavan, had dismissed the school strike—”the best thing you’ll learn about going to a protest is how to join the dole queue”—but the Senate later approved a motion in support of the students.

Thunberg said the rapid spread of school strikes for climate around the world was amazing. “It proves you are never too small to make a difference,” she said. Her protests was inspired by US school students who staged walk-outs to demand better gun controls in the wake of school shootings. But initially her classmates refused to join in: “I had to do it alone.”

The first two weeks of Thunberg’s strike were spent protesting outside the Swedish parliament. Now she spends every Friday on strike. “I like school and I like learning,” she told the Guardian. She said her strike would end when Sweden begins cutting its carbon emissions by a dramatic 15% a year: “Sweden is such a rich country and we have high per capita emissions, so we need to reduce more [than others].”

She also had a message for other school students: “You don’t have to school strike, it’s your own choice. But why should we be studying for a future that soon may be no more? This is more important than school, I think.”

Thunberg’s father, Svante, said: “As a parent you cannot support your child striking from school. I said to her you have to go out and do it for yourself.” But he added: “It’s OK in the holidays.”

The Thunbergs are descendants of Svante Arrhenius, the Nobel-prize-winning scientist who in 1896 first calculated the greenhouse effect caused by carbon dioxide emissions. Thunberg’s father was named after him, and said much of Arrhenius’s work has stood the test of time, but not everything. “He thought we’d be [at today’s levels of warming] in 2,000 years’ time,” said Svante Thunberg.