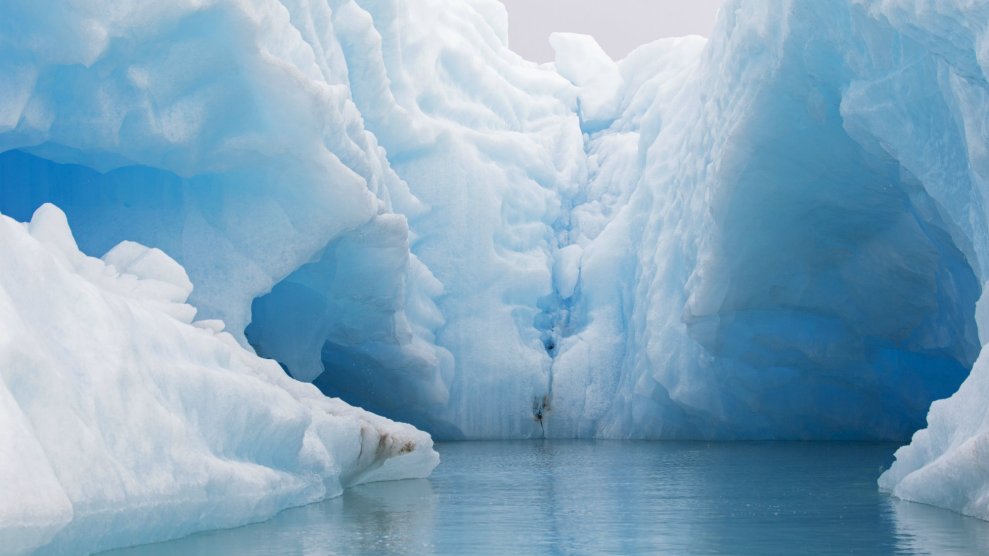 The Arctic is in the throes of what sea-ice scientist Peter Wadhams calls a “death spiral.” As the region’s once abundant ice melts, giving way to a less reflective surface, the Arctic heats up faster—now at a rate that is double the rest of the planet.

“The ice is much thinner and lighter and broken and kind of slushy,” Jennifer Francis, a scientist who focuses on the Arctic at the Woods Hole Oceanographic Institution, told Grist. “It’s been described as rotten.”

The Arctic is heading toward irreversible melting and ecosystem destruction, according to the annual Arctic Report Card released Tuesday by the National Oceanic and Atmospheric Administration. The researchers found that the Arctic has lost nearly 95 percent of its oldest ice. On top of that, the once-pristine region is becoming quite dirty: In addition to a growing toxic algae problem, the Arctic Ocean now has the highest concentration of microplastics of any ocean on Earth. (The tiny, barely visible plastics pose a threat to any seabirds or marine life that accidentally eat them.)

For people living up north, the warming Arctic has immediate effects. Coastal Arctic communities, including Indigenous peoples, are literally losing land as coastal ice (also called “shorefast ice”) melts. “The decline of shorefast ice is exposing communities to increased storm surge, coastal flooding, and loss of shoreline,” Donald Perovich, a professor of engineering at Dartmouth and a contributor to the report, said at a press conference.

For Americans in the continental United States, though, these changes in the Arctic can feel far away. It’s hard to imagine they’ll have much effect on daily life here. However, the implications are far-reaching. We’re not just talking sea level rise: The melting Arctic is disturbing Earth’s weather system, causing profound changes to weather beyond the North Pole.

“What happens in the Arctic doesn’t stay in the Arctic,” said Judah Cohen, an MIT climatologist who wasn’t involved in the report.

Warning: You’re about to learn a lot about the polar jet stream, a river of wind that travels around the Northern Hemisphere. The air in the north wants to flow to the south, where the layer of air is hotter and thicker (hot air expands, remember?) The now-warmer Arctic makes it so there’s less of a pressure difference, so what once was a mountain in the sky becomes a gentle hill.

Okay, okay, so the atmospheric hill in the sky is less steep. So what? Like a river moving down a soft incline, the jet stream moves more slowly and more erratically. In the United States, these changes in the jet stream are linked to a persistent “ridge”—like a hump in the sky. The “Ridiculously Resilient Ridge,” as it’s come to be known, causes weather patterns to linger, “perpetuating drought, heatwaves, and extensive wildfires across much of western North America,” according to the report.

A strong jet stream ridge is often associated with a trough, an elongated low pressure system. The trough in the eastern United States may have earned itself a new nickname. “I figured the trough should have a name too, because it’s very persistent,” Francis said. “So I call that the Terribly Tenacious Trough.”

Francis likens the trough to leaving the refrigerator door open. It allows “frigid Arctic air to plunge southward, bringing misery to areas ill-prepared to handle it,” Francis wrote in an article in The Conversation. This phenomenon, according to the NOAA report, brought a “parade of destructive nor’easters along the eastern seaboard” in the winters of 2013-14 and 2017-18. Most notably, it led to what has been dubbed the “bomb cyclone,” an intense blizzard along the East Coast in January 2018.

When a ridge becomes very sharp, it can break off and form an eddy that runs counter to the ridge’s current. This phenomenon is known as “atmospheric blocking,” and it locks weather systems in place. “It’s like a traffic jam in the air,” Cohen said.

Atmospheric blocking brings all kinds of severe weather, including the slower, more intense hurricanes we’ve seen of late. Harvey and Florence, which hovered over the coast for days and dumped trillions of gallons of water, were dangerously stuck in place thanks to a “block.”

As the warming Arctic sloughs off more layers of ice, it threatens to release stored carbon into the atmosphere—thus contributing to global warming and making extreme weather even worse.

This begins on a micro level: When the ground thaws, it activates microbes in the soil. “They start breathing out carbon dioxide or methane, depending on the situation,” said Mark Serreze, director of the National Snow and Ice Data Center. “It’s a feedback because if you put more of that carbon dioxide in the atmosphere, that warms up things further. Right now the question is, ‘Okay, when does that kick in?’”

The Arctic as we know it is slipping away, and there are still a lot of unknowns about what that means for all of us. “Exactly how the northern meltdown will ‘play ball’ with other changes and natural fluctuations in the system presents many questions that will keep scientists busy for years to come,” Francis wrote in the report, “but it’s becoming ice-crystal-clear that change in the far north will increasingly affect us all.”