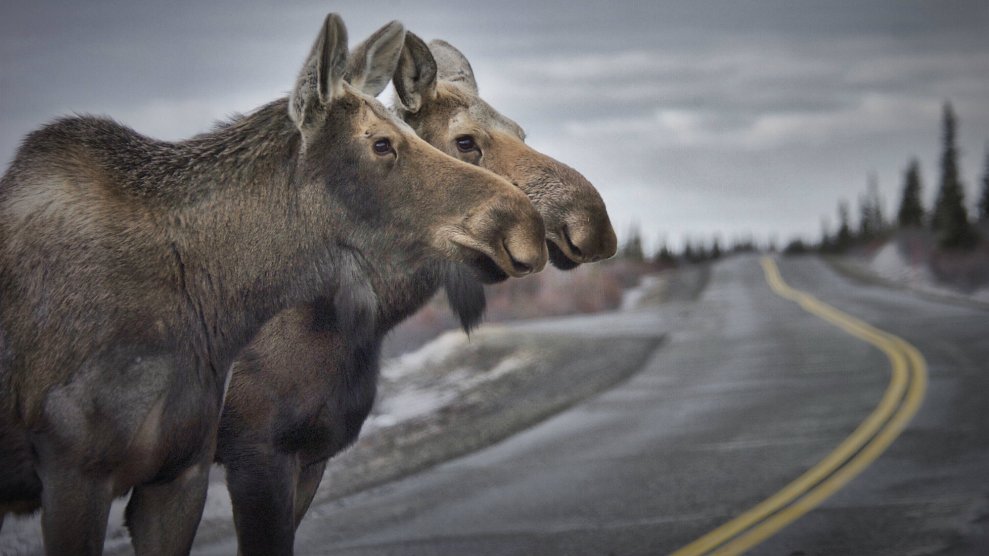 My mother texts me four photos of a dead moose the week I leave Alaska. It is freshly hit. The pebbled pink brains fanning across the pavement have not yet grayed in the brisk autumn air. The animal will not go to waste. For the past 50 years, Alaska has been the only state where virtually every piece of large roadkill is eaten.

Every year, between 600 and 800 moose are killed in Alaska by cars, leaving up to 250,000 pounds of organic, free-range meat on the road. State troopers who respond to these collisions keep a list of charities and families who have agreed to drive to the scene of an accident at any time, in any weather, to haul away and butcher the body.

During a recent trip to Fairbanks, my hometown, I asked locals why Alaska’s roadkill program has been so successful for so long. “It goes back to the traditions of Alaskans: We’re really good at using our resources,” Alaska State Trooper David Lorring told me. Everyone I talked to—biologists, law enforcement, hunters, and roadkill harvesters—agreed: It would be embarrassing to waste the meat. In the past few years, a handful of states, including Washington, Oregon, and Montana, have started to adopt the attitude that Alaskans have always had toward eating roadkill. A loosening of class stigma and the questionable ethics and economics of leaving dinner to rot by the side of the road have driven acceptance of the practice in the Lower 48.

In the past few years, a handful of states, including Washington, Oregon, and Montana, have started to adopt the attitude that Alaskans have always had toward eating roadkill.

The trooper in my mother’s photo will have no trouble finding someone to take the moose. It’s still daylight, and 200 pounds of good meat are sitting by the side of the road in Anchorage, the state’s largest city. The trooper may even wait until the salvagers arrive. Otherwise, someone driving by may grab the moose first.

Alaska’s geography, demographics, and can-do spirit make it uniquely fit for salvaging roadkill. It is far from the contiguous 48 states, and shipping food can be prohibitively expensive. When Alaska became a state in 1959, it was branded as a loosely governed last frontier where practical know-how and self-reliance were highly valued. Salvaging large roadkill is nothing if not practical. One moose—300 pounds of meat—is dinner for a year. And if the internal organs have ruptured and tainted the meat, or troopers can’t determine the cause of death, then they call dogsledders or trappers. “We have plenty of people willing to take a rotten, nasty moose,” Lorring told me, to use as dog food or bear bait. But roadkill rarely goes bad, wildlife biologist Jeff Selinger told me. People are quick to report large game collisions, and the cold climate limits wildlife diseases that can make meat unfit to eat.

Many Alaskans view animal processing and hunting as commonplace skills, like planting a garden or raising chickens. In a given year, 1 in 4 Alaskans hunt, and between the hunting seasons for moose, bear, and caribou, some type of big game is available every day of the year. For those new to hunting, it’s easy to join a trip an acquaintance is organizing without having the know-how to plan the logistics alone, and friends often have equipment available to share.

Joanna Young, a geoscientist and educator, experienced that openness when she moved to Alaska eight years ago to study at the University of Alaska-Fairbanks. Growing up in the suburbs outside of Toronto, she had no experience farming or butchering, and was a vegan when she moved. “Fast forward to three weeks ago: I am out in the middle of the night, covered in blood, using a battery-powered saw to saw through a moose leg. The Joanna of 10 years ago would have never expected this,” Young told me in October, describing her experience salvaging a roadkill moose. “It was surreal.”

“Fast forward to three weeks ago: I am out in the middle of the night, covered in blood, using a battery-powered saw to saw through a moose leg.”

Young’s moose was a year or two old, and had been struck in Salcha, an unincorporated town 50 miles from her cabin. It was small enough that Young and two of her friends could drag it to a flat spot to field dress it. Parts of its hindquarters were unsalvageable—it had been hit from behind—but the organs hadn’t ruptured, leaving most of the meat unspoiled. A friend who hunted regularly showed Young how to skin the animal, remove the guts without puncturing the bladder or intestines, and quarter the body. Within an hour, the group was driving back to Fairbanks with 100 pounds of meat in their game bags. “Compared to other moose, that is on the low end of the spectrum,” Young said. “But it was high quality, incredible free-range meat, so we still consider it a big windfall.”

The attitude toward apprenticeship in Alaska aided Young’s conversion to meat-eater. “There is no stigma around wanting to be a new learner,” she said. “People are really motivated to do things themselves, learn things themselves, build their own structures, get their own food, live their own way.”

In many areas outside of Alaska, it’s hard to imagine how non-hunters would easily learn to kill or process large animals. There are many obstacles: knowledge of anatomy, tracking, and marksmanship; the need to travel to remote locations and take time off work; required permits and specialized equipment to haul, process, and store the meat. There are also social barriers. Hunting and salvaging roadkill are often associated with rural people and places, which are seen as conservative and working-class. Many people have decided that the cost of hunting is not worth the benefit and shed the skill entirely.

Statewide bans on salvaging roadkill began in the 1950s, when 1 in 10 people in the Lower 48 hunted; today, it’s only 1 in 20. When California made picking up roadkill illegal in 1957, the law was supposed to prevent people from poaching by intentionally smashing into deer with their vehicles. Oregon, Washington, and Texas passed similar laws. My mother grew up in Oregon during the ban. When food was tight, her father illegally killed deer—with a gun. Like many people, she laughed at the idea of using an expensive car to capture her dinner.

Forty years later, states began repealing their bans, partly to reduce the workload of state-funded highway cleaning crews. Tennessee was one of the earliest to do so. As a state senator, Tim Burchett received national attention when he proposed a bill to let Tennessee residents collect and eat roadkill without a tag in 1999. His prediction that “everyone’s going to make us look like a bunch of hayseed rednecks” was right. A Knoxville News Sentinel headline read, “Grease the skillet, Ma! New bill will make road kill legal eatin’,” and a New York Times reporter covering the ridicule revealed his own prejudice when he wrote, “As if a state law were preventing anyone from scraping a happy meal off the asphalt. As if anyone would even dream of it.”

“As if a state law were preventing anyone from scraping a happy meal off the asphalt. As if anyone would even dream of it.”

The reporter was wrong: Within the last decade, more than five states have lifted or loosened their roadkill restrictions, making eating roadkill legal in more states than not. Today, thousands of people apply for salvage permits each year.

To understand roadkill’s rebranding, it’s helpful to look at how the lobster shifted from trash to treasure within a single generation. Until the late 1800s, lobsters were seen as a low-class food in the United States. The animal’s abundance was responsible for its status; so many lobsters washed up on the beaches of Plymouth that they formed stacks a foot or two deep.

It took the decimation of the lobster population and the discovery of a new type of customer to elevate the animal to epicurean treat. In the 1860s, the expanded railroad system and the rise of iceboxes let seafood dealers bring lobsters to inlanders, who were unfamiliar with the animal’s reputation. Glenn Jones, an oceanographer who pored over thousands of restaurant menus from the 19th century, found that by the 1880s, lobsters had shifted from a cheap salad topping to an expensive entree.

Today when I visit Alaska, I usually bring wild, frozen salmon back with me for friends. My family catches sockeye on the Kenai Peninsula, in a place Russian colonizers settled over 150 years ago. In their records, the Russians worried that settlers would get sick of all that salmon; apparently the food, just like New England’s lobsters, wasn’t highly regarded in the 1850s. But overfishing, the environmental dangers of farmed salmon, and new customers in the Lower 48 eventually transformed wild salmon into a luxury.

Likewise, the image of a roadkill salvager has changed as concerns about environmental waste, factory farming, and the health risks of conventional meat have grown. State Sen. Larry Jent of Montana went so far as to call it a “sin” to waste meat that could be salvaged. Even PETA, the world’s largest animal rights organization, argues for eating roadkill. On some corners of the internet, the stereotyped hillbilly eating roadkill has been replaced by an environmentally and food conscientious middle-class urbanite.

It’s clear that the ethos of eating roadkill in the Lower 48 is changing. When Washington legalized it in 2016 and Oregon followed suit the next year, there was not the same outbreak of embarrassment and ridicule as when Tennessee had loosened restrictions nearly 20 years earlier. Maybe we’re finally learning how to value resources that are so plentiful they seem almost free. And maybe we’re learning the lesson more quickly then we did with lobster and salmon. Over a recent lunch with my roommates, I suggested bringing some roadkill moose back to Brooklyn after my next trip to Alaska. One stopped lamenting the spoiled food she’d just tossed from our fridge, while the other paused over her plate of pricey, grass-fed beef. Neither had hunted or eaten wild game before, but both were excited at the idea. “Roadkill,” one said, nodding. “That’s the truest free-range.”