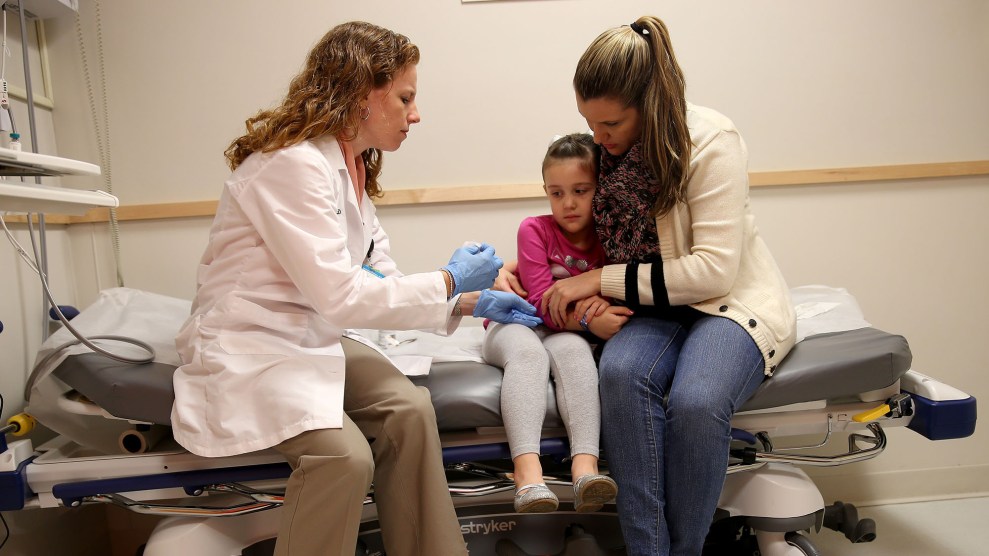 A pediatrician prepares to administer a measles vaccination.Joe Raedle/Getty Images

On January 25, after a measles outbreak sickened 31 people in the southwest corner of Washington state, Gov. Jay Inslee declared a state of emergency. All but one of the patients were children, most under the age of 10. Public health officials said they expected the number of cases to rise in the coming weeks. As of February 1, 43 cases had been confirmed across the state.

The outbreak recalled the 2014 measles epidemic that began at Disneyland in California, when at least 147 people were sickened. That incident spurred California lawmakers to pass more stringent vaccination requirements for children entering school. In Washington and Oregon, however, parents may enroll children who are not fully immunized against measles and other contagious, potentially deadly diseases. Low vaccination rates in the southwest Washington county where the current outbreak is centered and in the nearby Portland metropolitan area have exacerbated concerns that the outbreak could worsen in the coming weeks.

Before a vaccination program was introduced in 1963, the United States had between 3 and 4 million measles cases annually. Now, outbreaks are rare. That’s because of herd, or community, immunity: When enough people in an area are vaccinated against a disease, it loses its ability to spread. To stop a measles outbreak, “it may be that you need a vaccination coverage rate as high as 95 percent,” explains Matthew Daley, a pediatrician at Kaiser Permanente Colorado and a researcher specializing in vaccine-related issues. In Washington, he says, “the proof’s in the pudding, because if you have an outbreak, that means there’s not sufficient community immunity.”

Childhood vaccination rates in Washington are well below the 95 percent threshold for herd immunity. Across the state, only 90 percent of children entering kindergarten in 2017 had received the MMR vaccine that protects against measles, mumps, and rubella, down from almost 98 percent in 1998. Statewide, just 85 percent of kids met all of the school-entry immunization requirements for kindergartners, according to data collected by the state health department.

But statewide vaccination coverage isn’t always an accurate predictor of whether an outbreak could occur. “What’s really important is what the immunization rates are in your community,” Daley says. “The people you’re going to see at the grocery store, at the mall, at school, at a sporting event—it’s their vaccination rate that matters for you.”

Measles is highly contagious. According to the Centers for Disease Control and Prevention, 90 percent of unprotected people who come into contact with the virus will become infected. Measles spreads through coughing and sneezing, but you can contract it without having direct contact with an infected person because the virus lingers in the air for up to two hours. The telltale rash doesn’t usually appear for a week or two, giving infected people ample opportunity to spread the virus unawares.

Washington is one of 17 states that still allows vaccination exemptions for families who object to immunization for philosophical, moral, or other reasons. Children who are out of compliance with state immunization regulations may enroll in school if their parents file a form stating their objection to vaccination. As a result, local vaccination rates in the state vary widely. In Douglas County, nearly 97 percent of kindergartners are up to date on their vaccines. In San Juan County, just 47 percent are.

A majority of the measles cases in Washington have been in Clark County, in the state’s southwest corner. The county has one of the lowest vaccination rates in Washington: 76 percent of kindergartners were fully immunized in 2017, and 84 percent had received the MMR vaccine.

Zooming in closer, data from Clark County’s public and private schools exposes more pockets of spotty immunity. Of the 78 schools for which data is publicly available, 23 percent reported completed vaccination rates below 60 percent for incoming kindergartners. One elementary school with more than 100 students reported that just 41 percent of its kindergarteners were fully vaccinated. “If measles get into a school that has a 40 percent vaccination coverage rate, you’d expect the vast majority of those kids who are unvaccinated are going to get sick,” Daley says. “It’ll spread like wildfire.”

“Folks who choose not to vaccinate are taking advantage of those who do,” Daley says. Those who choose not to vaccinate rely on their immediate community to create the herd immunity that protects them. But during an outbreak, the unvaccinated are putting others who are unable to get the vaccine at risk. For children who are too young to get the vaccine, people with immune deficiencies, and those who are undergoing cancer treatment, getting measles can be deadly. “You could get exposed to measles just by going to the store,” Daley said. “It’s really not possible to protect yourself just by being careful of who you’re around.”

The last major measles epidemic in the United States occurred in 2014, when more than 140 people were infected in an outbreak that started at Disneyland in California. A spotlight was cast on the state’s school vaccination laws, which allowed parents to skip their children’s recommended immunizations by filing a personal belief exemption. As a result, pockets of unprotected children had formed across California.

The Disney epidemic propelled the state to pass a law that eliminated the personal belief exemption. Today, California schools can enroll a child only after reviewing their immunization records and determining that the student is fully vaccinated or has a valid medical exemption. In just two years, the New York Times reported, counties that once had the lowest immunization rates saw a 25 percent increase in vaccinations.

Now, Washington may follow California’s example. On the same day that Inslee declared a state of emergency, Washington lawmakers introduced a bill that would eliminate personal exemptions for the MMR vaccine. Previous attempts to revoke the state’s nonmedical exemption have faced stiff opposition from parents who have said that ≥such a measure would take away their rights to make decisions for their children.

Multnomah County, Oregon, home to the city of Portland, sits just south of Clark County, where the Washington outbreak is centered. So far, a single measles case has been declared in the county and remains the only confirmed incident in the state. Yet health officials are concerned that the virus could continue to spread across state lines. “We’ve been watching the outbreak closely because people do travel back and forth quite a bit,” says Jennifer Vines, a public health physician and the medical lead for outbreak response in Multnomah County.

Additionally, Multnomah County has particularly low vaccination rates. The county reports that only 66 percent of its two-year-olds were fully vaccinated in 2017. “We do know that we are below the herd immunity threshold,” Vines says. “Children who are not vaccinated often tend to go to the same school or be part of the same community.”

The county was also recently exposed as having one of the country’s highest rates of nonmedical vaccine exemptions. Researchers from the Baylor College of Medicine and the Texas Children’s Hospital Center for Vaccine Development found that during the 2016-17 school year, more than 700 kindergartners in the county were unvaccinated for nonmedical reasons.

Given the county’s low vaccination rates, Vines says, health officials were “disappointed but not surprised” to confirm a case of measles. “As much as our responsibility is to promote vaccine uptake, and we’re still of course leading with that message, we’ve also honed our skills on how to respond to measles,” she said. “Unfortunately, this is an outbreak that we have prepared for.”