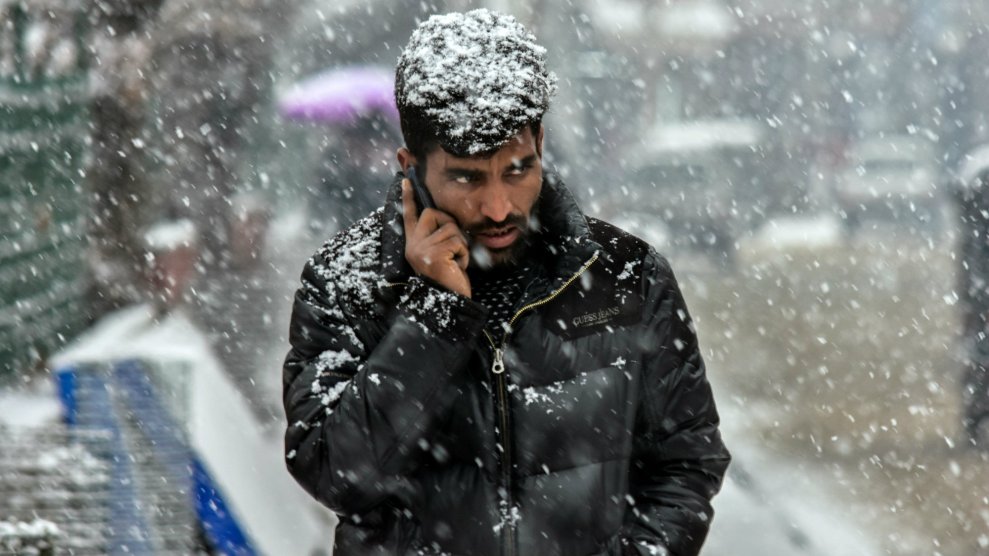 Across the Midwest today, hundreds of schools and businesses are closed, dozens of flights and trains have been canceled, and the governors of Wisconsin, Illinois, and Michigan have declared states of emergency as a bone-chilling, breath-taking polar vortex bears down on the region. While I slept in Minneapolis, overnight wind chills in the city topped minus 50 degrees. With temperatures like that, you can’t stay outside for more than five minutes without running the risk of frostbite.

As a native Midwesterner, I’m used to the annual assault of winter weather on the human body, hairless and adapted over millennia to indoor living as we are. Despite our thermoregulatory shortcomings, we’ve managed to survive extreme cold through technology—from insulating clothing to systems that pump hot air and water around our homes.

A look at hourly wind chills since 3 pm Tuesday. Upstream over Minnesota tells the tale…colder air coming our way into morning. Thanks for the chill gift @NWSTwinCities 🙂

Stay safe, and if you absolutely must be outside, limit the time and dress appropriately. #ILwx #INwx pic.twitter.com/t3yRlCALs2

But much of the tech that facilitates our connected modern lives itself loses functionality as temperatures drop below freezing. Batteries, screens, sensors, lightweight materials—the things that power our modern mobile lifestyles—just don’t work when it gets this cold. Here’s what to expect of your gear.

Think about all the gadgets that you regularly plug into a power strip. It’s a lot, right? Besides everyday items like a phone and laptop, you might also have a fitness tracker, smart watch, Bluetooth headphones, digital camera, e-reader, vape pen, drone, or rechargeable bike lights, just to name a few. Most if not all of them are powered by lithium-ion batteries, whose high energy density and ability to handle both low and high currents have made them the industry standard for personal electronics. But those same properties become a problem as soon as temperatures dive below 32 degrees F.

“Lithium-ion batteries suffer so badly in freezing temperatures because they have very little internal resistance.”

“Lithium-ion batteries suffer so badly in freezing temperatures because they have very little internal resistance,” says Hanumant Singh, an electrical engineer at Northeastern University who builds cold-weather robots for places like Antarctica and Greenland. Less resistance means these batteries generate less waste energy as heat (a good thing in more mild climes). But the absence of waste heat also means they’re more vulnerable when temperatures plummet. The colder it gets, the slower the metabolism of the chemical reaction inside the battery. The battery drains faster as a result. If you’ve ever been texting someone at a healthy-looking 25 percent charge only to have your phone die mid-eggplant emoji two seconds later, you’re familiar with how steep the drop-off can be. “It’s very dramatic,” says Singh. Carrying around a smartphone in any weather colder than minus 35 degrees F, he says, will kill it completely in five minutes—right around the time frostbite would strike the hand holding it.

Such deficiencies are particularly pronounced in devices like smartphones, which are designed to sit mostly inactive for long periods of time throughout the day. Their batteries never draw enough current to heat themselves. But vehicles like drones and electric cars, which demand very high power for shorter periods of time, can generate enough warmth to keep the batteries going, just at a greatly reduced level of performance. While cold weather is a challenge for all electric vehicles, the small size of electric scooters can make them especially vulnerable to failures, as noted by several “juicer” forums on Reddit. Companies like Lime monitor the performance of their fleets, including battery life, but say they are not yet aware of any trends coinciding with this week’s plummeting temps.

The performance of individual products will of course vary based on the manufacturer, battery model, and wear and tear on the device. Apple suggests not operating its phones below 32 degrees F. Amazon says the same for the Kindle. Fitbit, on the other hand, recommends a minimum ambient operating temperature no colder than 14 degrees F for its wellness wearables, which should maintain better temperature control based on continuous contact with your skin. But the same general rules apply to anything that uses lithium-ion battery technology.

So if you have to venture out into the polar vortex, store your phone as close to your body as possible, leave the wireless headphones at home, and keep your time outside to under five minutes. If you do freeze your device, don’t plug it in cold. Allow it to slowly come up to room temperature before you recharge it. Failing to do so sets off a different, unwanted chemical reaction that could damage the battery permanently.

Batteries fare the worst in cold weather, hands down. But a close second are the LCD screens that illuminate our phones, tablets, laptops, digital camera displays, smart watches, and automobile GPS mapping and control systems. LCDs consist of a layer of millions of multicolored pixels, each one controlled by a separate transistor. When turned on, a zap of electricity shocks a tiny, twisted-up liquid crystal to attention. In its altered structural shape, the crystal directs light through a pair of polarizing filters and into the pixel, lighting up the desired color. All together these millions of pixels produce all the colors in an image.

But LCD technology gets sluggish when it gets too hot or too cold. Liquid crystals work best in a Goldilocks temperature range somewhere between 32 and 120 degrees F. The colder it gets, the slower the response time from electrical signal to pixel transition, which degrades the image, making it blurry. Some fluids can make crystals functional all the way down into the negative 60s, but most consumer LCD screens crap out around 40 below. “It’s a chemistry that doesn’t work well in the cold for a completely different reason,” says Singh, who has resorted to smuggling a laptop inside his parka when he travels to drone launches in the Arctic. He waits until the absolute last minute to expose the machine to the environment and prays that it doesn’t die before his vehicle is in the ocean. “If we were somehow hypothetically not battery-limited, the screen would be the thing that would get us.”

Then there are the tiny gyroscopes, oscilloscopes, oscillators, and more: sensors that collect the information that tells us where we’re going, what time we need to get there, how many steps we took, and how many calories we burned to do it. These components track the orientation of a device and how fast it’s moving through space—crucial tasks for navigating, telling time, and logging activity goals. These sensors’ performance also degrades when the temperatures go extreme.

The fancier the sensor, the wider its operating range. “Doing it across a huge spectrum, say minus 50 to 120 degrees F, is almost impossible,” says Singh. “But that means they’re going to have accuracy issues at these extreme cold temperatures.” To keep costs down, most consumer electronics employ more run-of-the-mill devices.

Take digital watches, for example. Whether it’s an Apple Watch or a Garmin or a $10 cheap plastic number from Walmart, what they all have in common is that if you flip them over, the backside is metal. The oscillator inside any of those watches is calibrated to 98.6 degrees F, and the metal heat plate conducts the wearer’s body temperature to keep the sensor in its most accurate temperature range. Take it off and wave it around a minus 50 windchill and you might lose seconds, if not minutes, of your day. Not ideal if accuracy’s your jam, but perhaps that’s one way to race through the coldest day in recent history.