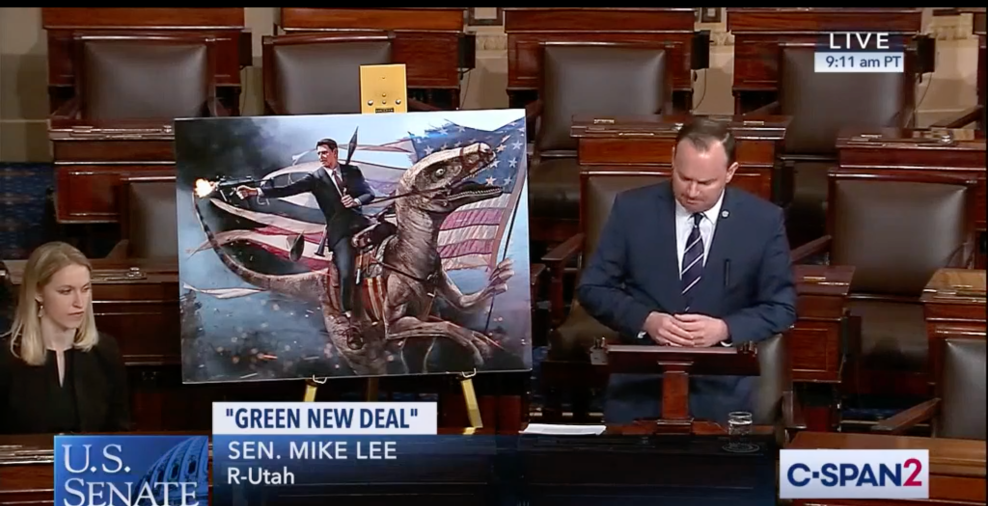 Freshman congresswoman Alexandria Ocasio-Cortez (D-N.Y.) has inspired Republicans to talk about climate change, albeit not in the most productive way. When Senate Majority Leader Mitch McConnell (R-Ky.) forced a vote on the Green New Deal resolution on Tuesday as part of his efforts to brand all Democrats as socialists or sow division within their ranks, most of the focus remained on how Democrats would respond to the bad-faith ploy.

Instead, Democrats decided to vote “present” on Tuesday adopting a strategy similar to their approach last year when House Republicans brought a pro-ICE resolution to a vote. This show of unanimity included Senator Ed Markey (D-Mass.), the Green New Deal resolution’s sponsor.

In fact, there isn’t a Green New Deal yet, beyond a framework, a name, and some very ambitious targets: Slashing greenhouse gas emissions to zero in a decade and guaranteeing jobs and fair wages. But it’s never too early for the war over the narrative to start. More moderate Green New Deal critics often complain that it goes too far on policy matters like nuclear energy, which the resolution did not address at all. And conservatives charge it will take away American livelihoods, cows, and air planes.

Remember: Republicans have no plan for confronting climate change. Few national Republican politicians will even admit that it is a problem, let alone propose policy options for how to slash greenhouse gasses and prepare for the future. So while the Green New Deal debate has forced Democratic presidential contenders and congressional leaders into debating serious choices over policy, the Senate Republicans (with cues from President Trump) treat climate change like a joke.

Consider Sen. Mike Lee (R-Utah) and his contribution to the debate today.

Republicans have repeatedly characterized the Green New Deal as “ridiculous.” In keeping with the light-hearted attitude to sea-level rise and existential threats, Lee showed a series of charts to show just how “ridiculous” he considers the Green New Deal to be. “There isn’t a single serious idea in here,” he said.

Swapping charts, he continued, “This is the real solution to climate change, babies…By having more children, you’re making your nation more populous, boosting its capacity to solve climate change.”

In a rally Tuesday morning with the activists of Sunrise Movement before the Green New Deal vote, Senator Ed Markey (D-Mass.) called McConnell’s move a “sham vote.” Republicans, he said, “have no plan to fight climate change.” 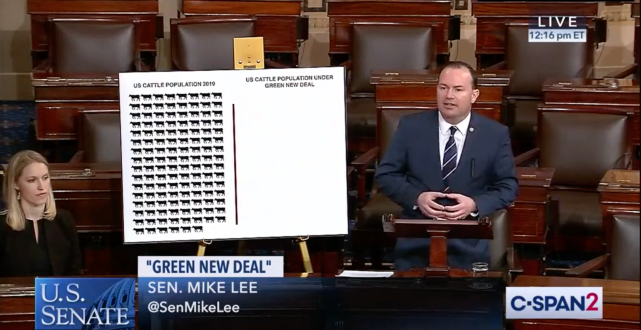 Ocasio-Cortez had her own takeaway from Lee’s performance.

Like many other women + working people, I occasionally suffer from impostor syndrome: those small moments, especially on hard days, where you wonder if the haters are right.

But then they do things like this to clear it right up.

If this guy can be Senator, you can do anything. https://t.co/vU4ChbTnnr