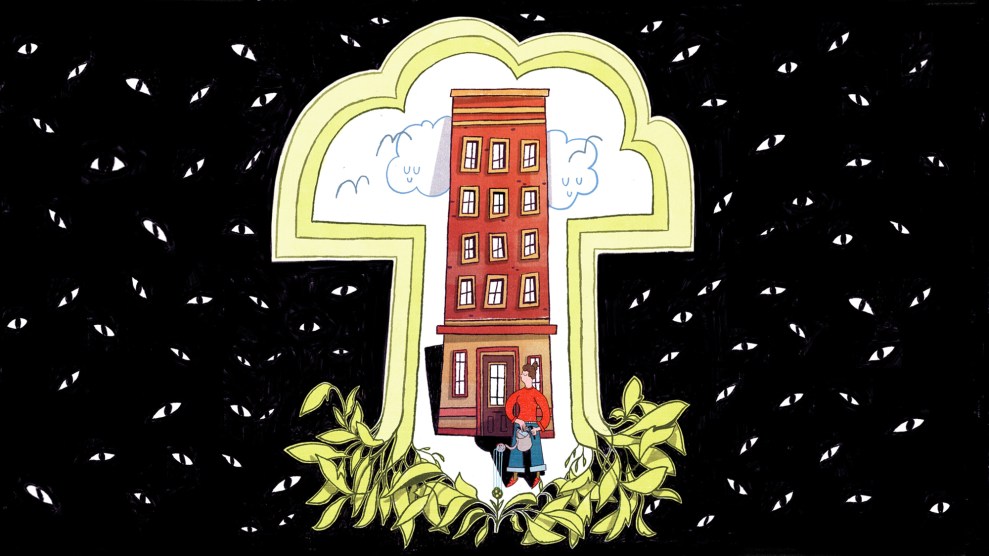 When the Ida B. Wells housing project opened on Chicago’s South Side in 1941, its up-to-date kitchens and grassy lawns drew more than 1,500 black families looking for somewhere decent to settle. But over the decades, the project fell into disrepair: The grass turned to mud, and in an effort to reduce dust and maintenance costs, the city paved over many of the development’s green spaces, killing its trees. By the 1980s, the project was rife with gang warfare and drugs.

The loss of greenery may have had something to do with its decline. In 2001, environmental researchers at the University of Illinois published a landmark study on crime rates in different sections of the Wells project. By comparing aerial photos and police crime reports, the researchers calculated that buildings still surrounded by lots of foliage saw 48 percent fewer property crimes, on average, and 56 percent fewer violent crimes than buildings with low levels of vegetation. To be clear, the analysis didn’t prove the trees caused the phenomenon. But in the nearly two decades since, a small but growing body of research has supported the idea that trees may have a calming effect on crime.

City managers have long known about the benefits of greenery. According to the US Forest Service, urban trees help save energy, lead to better air and water quality, reduce stormwater runoff, store carbon, and increase property values. In California, for example, urban trees—all 173 million of them—provide an estimated $8.3 billion in environmental services every year, according to a 2017 study by researchers from the Forest Service and the University of California-Davis. And a major 2019 study of nearly 1 million Danish people showed that kids who grew up near green spaces had a lower risk of psychiatric disorders later in life.

But beyond that, some cities are beginning to explore urban greening as a way to increase residents’ safety, especially in low-income, blighted areas. In Philadelphia, researchers in 2018 produced a randomized trial that included more than 500 vacant lots. One-third were “cleaned and greened” with trees and grass. One-third were only cleaned, with no greenery added, and one-third were left alone. Of the lots that received either treatment, researchers observed statistically significant reductions in overall crime and burglaries over a 38-month period, including a 29 percent drop in gun violence in neighborhoods below the poverty line. If they scaled the treatment across the entire city, the authors noted, it could translate to more than 350 fewer shootings each year.

In Cincinnati, tree loss was associated with an uptick in property crimes, assaults, and violent crimes.

Researchers picked up on a similar trend in Cincinnati, where the emerald ash borer, an invasive beetle, forced authorities to remove 646 dead or dying ash trees between 2007 and 2014. City records helped reveal that tree loss was associated with an uptick in property crimes, assaults, and violent crimes.

What, exactly, makes foliage a possible deterrent to delinquency? For the most part, it’s still an unexplained phenomenon. But researchers have come up with a few ideas. Some say trees might signal that the area is well cared for, similar to the “broken windows” theory, which suggests that disorder invites crime (though there is no scientific consensus on this relationship). Some say green spaces make an area inviting and can lead to more informal surveillance, or “eyes on the street.” Other theories point to the well–documented calming effect of vegetation, or the idea that greenery promotes trust within a community.

“This is a subliminal thing,” says Geoffrey Donovan, an economist at the Forest Service who helped write a 2012 study that found trees on the street were associated with crime reduction in southeast Portland, Oregon. (The results were mixed for trees in yards.) “It’s not like somebody with a little mask is creeping up to, you know, burglarize your house and they see a tree and go, ‘Oh, big-leaf maple!’ and run away,” he says.

Even if the cause and effect are still murky, it’s hard to argue against giving trees a try. Conventional crime prevention, like hiring more police officers and incarcerating people, is “immensely expensive,” says Michelle Kondo, a social scientist at the Forest Service and an author of the Philadelphia study. The city only spent about $5 per square meter to green each lot. For a 29 percent reduction in gun violence, that’s a pretty amazing return on investment.

Philadelphia is one of few cities exploring the effect of green space on crime. As Kenton Rogers, the co-founder of Treeconomics, a UK-based firm that quantifies the benefit of urban trees, points out, it’s difficult for city managers to estimate how much a single tree contributes to crime reduction, unlike, say, measuring the amount of carbon it can sequester. Still, according to Kondo, cities including New Orleans; Camden, New Jersey; and Flint, Michigan, are all trying to measure how urban greening may make their communities safer.

In Chicago, it’s uncertain if adding trees could have helped the Ida B. Wells project. In 2002, a year after the University of Illinois researchers published their paper, Chicago began demolishing the apartments. Now it’s part of Oakwood Shores, a mixed-income community. Activists just raised the funds to build a monument honoring Wells, the investigative journalist and civil rights leader after whom the project was named, amid a stand of oak trees.