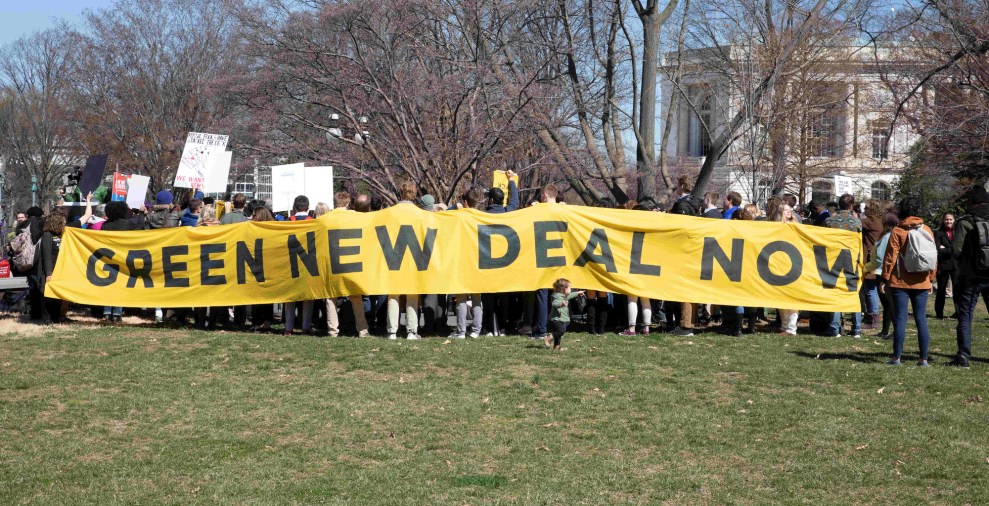 The concept of a Green New Deal has been floating around for the past decade, but ever since Alexandria Ocasio-Cortez (D-N.Y.) began to promote it, the term has become ubiquitous shorthand for aggressive climate action. Inspired by the mobilization of government resources by FDR to address the Great Depression, a Green New Deal envisions total commitment by the federal government, from jobs to infrastructure to a massive infusion of cash to address the dire consequences of climate change.

Now, different visions are being implemented on a smaller scale in Washington state, New York state, and Los Angeles. Meanwhile, a number of Democratic presidential hopefuls have tried to seize the initiative with their own interpretations that include everything from Beto O’Rourke’s plan to hit net-zero emissions by 2050, to Elizabeth Warren’s public lands jobs corps, and others that are promised but have not yet been announced.

Given how many versions are floating around, many questions surround the Green New Deal. Why do we need it? Who will pay for it? Is it even practical? So we asked our readers to suggest a few they’re most curious about. The two that appeared most often were these: How will the Green New Deal work? What specific legislation will be needed for a transition to renewable energy?

Here are the answers.

What’s in the actual resolution?

First, let’s clear up some basic misunderstanding. The 14-page nonbinding resolution sponsored by Ocasio-Cortez in the House and Ed Markey (D-Mass.) in the Senate outlines only a broad vision. For all the Republican efforts to discredit it, claiming the plan would cost nearly $100 trillion and ban meat and planes, it does nothing of the sort because it doesn’t get into that level of detail. The resolution is only a starting point, calling for a 10-year national mobilization to slash greenhouse emissions to net-zero. (There’s been a sideshow debate on the left this week in reaction to Beto O’Rourke’s climate plan about whether the deadline should be 2030 or 2050.)

The heart of this ambitious vision is that it cuts across sectors by providing relief for the most vulnerable Americans in the economic transition, and connecting programs for health care, inequality, and environmental justice with the central selling point of a moonshot green jobs program.

What will probably be included?

We talk about the Green New Deal as if it were a single piece of major legislation, but it would almost certainly end up as a package or series of bills going through multiple committees. Still, we can make educated guesses about some of the specifics.

The general approach to keeping the world below catastrophic warming levels involves cuts to greenhouse gasses and implementing 100 percent renewable power. But the centerpiece of the Green New Deal’s promise—and what might make it popular with voters—is its emphasis on jobs. One recent model for the massive economic injection is the stimulus program that was created after the 2008 financial crisis, whose formal name was the American Recovery and Reinvestment Act of 2009. “Our view is, this is going to be much bigger than that first stimulus, and it’s going to be more than just a stimulus,” Robert Hockett, a Cornell University law professor and senior adviser to AOC told E&E News. “We’re thinking of it as a massive national reconstruction.”

“Our view is, this is going to be much bigger than that first stimulus, and it’s going to be more than just a stimulus. We’re thinking of it as a massive national reconstruction.”

The 2009 stimulus was meant to stabilize the US economy, but it also injected billions in loans, grants, and research into energy efficiency, clean energy, and electric vehicles—despite some controversial investments (hello, Solyndra).

The Green New Deal proposes an added focus on shovel-ready jobs and infrastructure building, with the objective of creating a more equitable economy, providing guaranteed jobs for those who once worked in industries now changing dramatically during a clean-energy transition.

A truly comprehensive approach to climate change requires cutting across major sectors of the economy and not just the power sector. One segment of the Green New Deal legislation would need to set a pathway for 100 percent renewable power. In practice, that would mean not just retiring coal plants but newer gas plants as well, while encouraging a mix of utility-scale solar and distributed energy for rooftop solar coupled with more powerful storage. It is still uncertain as to whether this would also mean federal or ratepayer bailouts or some other mechanism for earlier retirements of the coal and gas plants that are not ready to be mothballed.

Transportation is the top source of emissions in the US. More public transit, urban planning, and electrifying everything may be a simple answer, but the harder question is how to get the millions of gas-guzzling cars off the road. Same goes for cleaning up air travel, a fast-rising source of emissions globally, as well as agriculture, which is another major contributor to methane pollution. Legislation would also inject investment in making new buildings far more efficient and navigating thorny local zoning issues. In response to these pressures, the Green New Deal would have to electrify as much of the transportation sector as possible, ensure new buildings meet the highest energy efficiency standards, and retrofit existing ones.

Investment isn’t the only way of addressing the problems across all sectors. Some progressive advocates say regulation can take the place of an economy-wide carbon tax or cap and trade that has failed to gain popular support in many years of trying. Fortunately, the Green New Deal wouldn’t need to start from scratch. There have been dozens of bills introduced over the past decade that never went anywhere in the Republican-controlled Congress. A few potential models that could be folded in are Sen. Jeff Merkley’s (D-Ore.) cosponsored 100 by ’50 Act, Sen. Bernie Sanders’ (I-Vt.) Keep It in the Ground Act, and Elizabeth Warren’s (D-Mass.) Climate Risk Disclosure Act. There are dozens of examples of proposed legislation that tackle each piece of the climate problem individually.

The Green New Deal is committed to delivering justice for communities of color and those most vulnerable to climate impacts. The Indigenous Environmental Network has put forward a number of proposals centered around strengthening collective bargaining, implementing a strong stakeholder process for grassroots voices, and focusing investment and jobs first in frontline communities.

What’s not in it?

It’s unlikely we’ll see much in the Green New Deal that promotes investment in natural gas as a bridge fuel. Nuclear is also a controversial solution for climate change, given that disposing of radioactive waste requires enormous upfront investments that span decades of construction. Research and investment in carbon capture and storage is also less popular among progressives, though it could win over some more moderate Republicans who’ve already backed new funding at the Department of Energy.

Other than that, the all-encompassing legislation will need to strike compromises to earn broader support among Democrats, by winning over labor and other key progressive constituencies. For the sake of envisioning what a clean economy from a Green New Deal could involve, we couldn’t factor in all the complications from political fights.

The policy experts at New Consensus, a progressive group that’s working with AOC’s office to flesh out ideas for legislation, expect to have more proposals in early 2020. And for those who asked us how much climate action might cost and why justice is linked to climate action, we’ll keep reporting on these and other stories highlighting this critical issue.