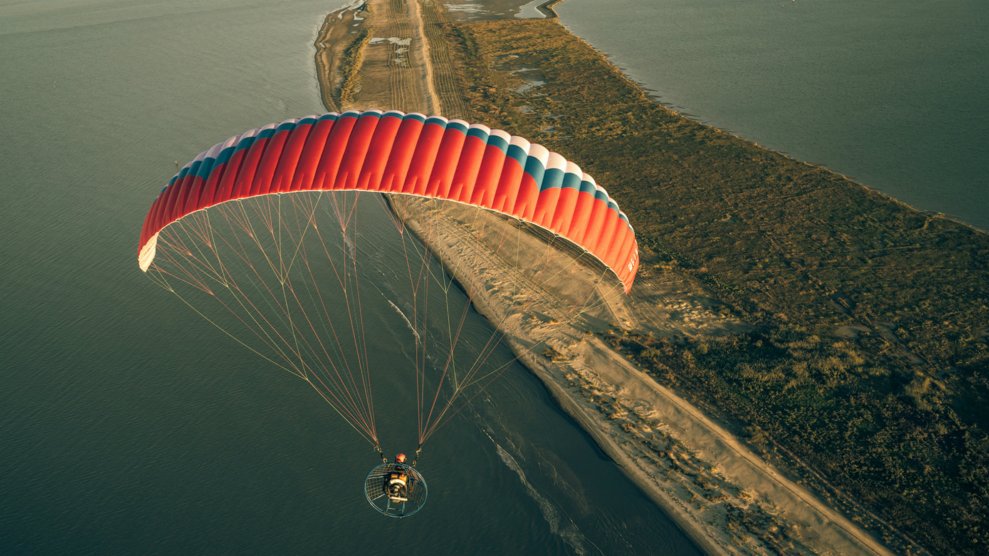 On a Wing and a Prayer/Mountainfilm

Another Memorial Day, another Mountainfilm Festival. Since 1979, outdoor enthusiasts and environmental activists have flocked to the mountain town of Telluride, Colorado, to watch the drama of the natural world unfold on the big screen.

Grist, the media sponsor of this year’s Mountainfilm Festival, reviewed a few of our favorite docs from more than 150 films. In the following features and shorts, newts dance underwater to a jazzy soundtrack, salmon hurtle through the air, and a mud explosion wreaks havoc on an Indonesian village.

Tres Santos, a hotel and housing development in Baja California Sur, sells itself as an oceanside paradise featuring sunset yoga and a small farm: “A free-range, locally sourced life.”

Patrimonio takes you behind the development’s veneer. In the hour-and-a-half documentary, you learn the story of one community’s fight against a mega-corporation to protect their water, beach, and way of life. Secret deals are made, public promises are broken, and criminal charges are filed as developer company MIRA chips away at the resistance of 150 local families living and fishing off the disputed Punta Lobos beach.

The irony is almost painful to watch: How sustainable can Tres Santos be as it competes with the local population for already limited water? The impassioned leadership of lawyer John Moreno pushes the community to stand up for their rights. “What they bring is money,” Moreno says. “What you bring is moral dignity.”

“Why do we fight and plunder the world until nothing is left? The harder question to answer is why we give everything to a cause that seems so hopeless.” These are the opening lines of Kifaru, a documentary about the people caring for Sudan, the last male northern white rhino in the world.

Kifaru—named after the Swahili word for rhino—tells the story of James Mwenda and JoJo Wachira, two rangers at Kenya’s Ol Pejeta Conservancy. The film weaves together a somber storyline with raw, lighthearted moments, like a scene where Wachira learns to fly a kite.

Decades ago, thousands of northern white rhinos roamed East and Central Africa. But poverty and a war—combined with foreign markets that value rhino tusks more than gold—led people to hunt the species to near extinction. Sudan, who’d been kept in a zoo in Europe, was soon the last male of his species.

The film received Mountainfilm’s 2019 Moving Mountains award, the festival’s largest cash-prize award for nonprofits. The $3,000 prize will be donated to the Ol Pejeta Conservancy, where rangers are still caring for the remaining female rhinos.

Flying through the air in the spray from a helicopter, ejected out of a flexible white tube dubbed the “salmon cannon,” or being thrown, frozen, back into streams by school children: Artifishal is a lot of shots of salmon being whisked about against their will. The 79-minute film explores whether fish hatcheries, intended to supplement wild populations, might actually be doing the opposite.

Salmon are in decline, despite the best efforts of these facilities. The film argues that by weakening the gene pool and introducing competition for resources, salmon hatcheries may ultimately be harming wild fish populations. (Cue fish hurtling through the air in slow motion.)

The River and the Wall

Ben Masters’ new documentary captures the beauty of the Texas-Mexico border on the silver screen. Part adventure, part ode to the border, The River and the Wall is visually stunning. The 110-minute film takes you through the Boquillas Canyon, introduces you to the various animals that call the border home, and pulls you through what could’ve been a dull policy discussion about different approaches to immigration with a rich, powerful narrative.

Masters recruits four other people—an ornithologist, a river guide, another documentarian, and a conservationist—to go on a 1,200-mile journey from El Paso to the Gulf Coast, traversing the entire length of the Texas-Mexico border by bike, canoe, and horseback. Along the way, they meet ranchers who’re fighting the federal government to keep their land and run into border crossers in the middle of the night.

The film also masterfully weaves in the personal stories of two of Masters’ companions on the journey who were children of undocumented immigrants. Also featured: Beto O’Rourke talking about his hometown, El Paso, and Rep. Will Hurd wading through chest-high water.

March of the Newts

In the forests of the Pacific Northwest, the rough-skinned newt lives a pretty funky life. March of the Newts, a short film from the nonprofit Freshwater Illustrated, opens with cinematic shots of a hiker and her dog in the mist, but takes a fantastic turn right around the two-minute mark. If you don’t already love newts, just give the video a chance. You’ll surely change your mind in five minutes.

It’s been over a decade, but Dian, a teenager in Indonesia, vividly remembers the morning in 2006 when scalding mud and gas burst violently from the ground in her village in East Java, destroying her family’s home and over a dozen neighboring villages. The explosion buried houses, businesses, and roads in muck and drove tens of thousands of people from their homes. In Grit, filmmakers Sasha Friedlander and Cynthia Wade capture the muddiness of an environmental disaster, both literally and figuratively.

Powerful images of how the geyser of gritty goop scarred the landscape—it’s cracked dry in places, wet sludge in others—are coupled with stories of the victims battling to demand compensation from those responsible. That’s where it gets particularly muddy. There’s an ongoing debate about the cause of the disaster. The likely culprit, according to scientists: Lapindo, an oil and gas company that was drilling for natural gas about 800 feet from the rupture. The corporation’s paid researchers blame an earthquake that happened 180 miles away, absolving Lapindo of responsibility as well as the need to compensate victims for their loses.

Some of the protagonists of Treeline: A Story Written in Rings are hundreds or thousands of years old. Trees, for once, aren’t the backdrop. Western red cedars, bristlecones, and limber pines take center stage. Meanwhile, the people in the short film—tree skiers, a tree doctor, and a Shinto priest, to name a few—play only minor roles.

Suzanne Simard, a forest ecologist working in the old-growth forests of British Columbia, discovered that trees “communicate,” or share carbon with each other, through giant fungal networks under the ground. In the film, she explains why we might have deeply rooted (no pun intended) connections to these immobile giants. “When we look at the pattern of a mycorrhizal network,” she says, “when we actually dissect it and look at all the mathematical relationships, it’s the same pattern as a neural network…it’s kind of like a brain.”

With a calming soundtrack interwoven with natural sounds, and awe-inspiring shots of larger-than-life trees dwarfing the skiers zipping between trunks, Treeline will send you searching for your tree.

On a Wing and a Prayer

Ben Depp captures the coastline from the sky. Not with a plane or a drone—instead, he harnesses himself to a giant kite and propels himself with a fan. On a Wing and a Prayer follows Depp as he tries to document Louisiana’s disappearing coastal wetlands and barrier islands. The film is the first of a five-part series focusing on the Gulf Coast’s diminishing wetlands.

The views from the air are stunning: Hundreds of little green islands dot the sea, home to birds and dolphins. The islands and coastal marshes serve a utilitarian function as well, protecting coastal towns and cities from flooding and hurricanes.

But the Louisiana coast is sinking into the ocean. And no, not just because of rising seas. Trenches carrying oil pipelines have led saltwater to flood as far as 100 miles inland, causing plant roots and soil to give away. Today, roughly one football field-sized area of Louisiana’s coastal wetland erodes every hour. Depp’s photos could help scientists studying the habitat loss, or simply freeze a snapshot in time in the face of an uncertain future.