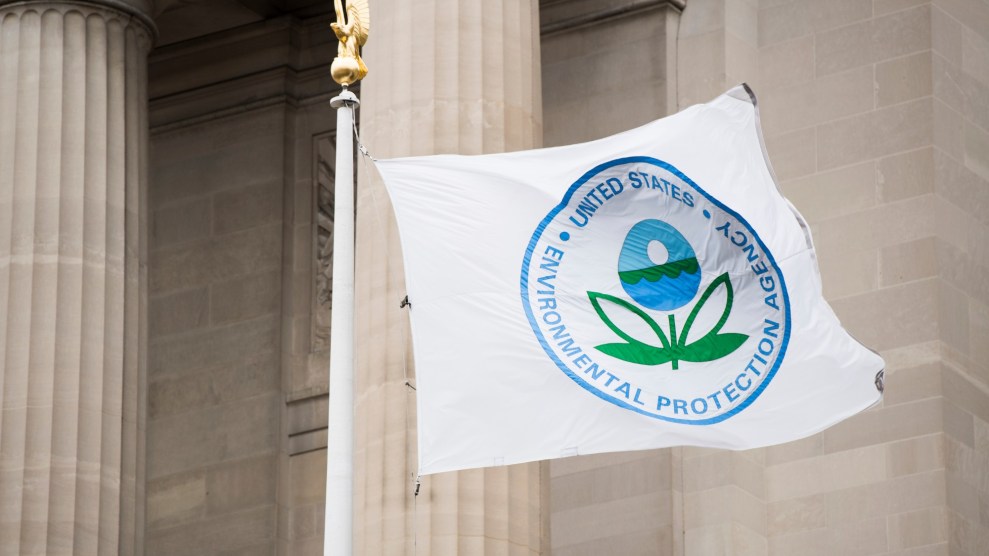 A top Environmental Protection Agency official gave a presentation last year at a gathering of some of the most zealous deniers of climate science, highlighting the influence a small, fringe movement hawking crank theories now wields in Washington.

Emails HuffPost reviewed reveal Bill Wehrum, the EPA’s assistant administrator for air and radiation, gave a presentation in early February 2018 at an event organized by the Cooler Heads Coalition, an umbrella group of tax-exempt charities and right-wing nonprofits that includes some of the most ardent proponents of climate change denial.

In an email dated Feb. 6, 2018, Myron Ebell, who has led the Cooler Heads Coalition for more than two decades, offered gratitude for the EPA officials’ attendance at the previous day’s event, and invited the group to the next meeting a month later.

“Thanks Bill, David, Liz, and Tate, for coming to Cooler Heads and for your presentation and taking questions, Bill. It was most useful,” Ebell, who led the Trump administration’s EPA transition team, wrote. “We look forward to seeing any or all of you at future meetings.”

The EPA declined to comment on the nature of Wehrum’s presentation and whether any officials attended other events with the Cooler Heads Coalition.

“EPA takes time to meet with stakeholders on a variety of regulatory issues, this is no different,” said EPA spokesman Michael Abboud.

Ebell did not respond to calls and text messages requesting comment.

The revelation is not surprising from an administration that’s attempting to eliminate or delay, by The New York Times’ estimate, at least 83 environmental regulations, particularly rules to curb climate pollution. The EPA is expected to announce a proposal next week to replace Obama-era power plants rules with a regulation that would, by the agency’s own estimates, allow for enough pollution to cause up to additional 1,400 premature deaths per year by 2030.

“The fact that Bill went to talk to a group like this is the cherry on top of a toxic sundae,” Joseph Goffman, a former senior counsel and associate administrator for climate who served in the Obama-era EPA, said by phone. “It’s the toxicity of the sundae that’s really going to have the damaging impact on people’s lives.”

But the emails show the degree to which top officials at the nation’s leading public health agency have cultivated chummy ties with “fringe conspiracy theorists,” the Sierra Club, which released the records obtained through a Freedom of Information Act request, said in a statement, calling the relationship “despicable.”

“It removes any illusion that the EPA is acting in good faith to ensure the public trust.”

“It removes any illusion that the EPA is acting in good faith to ensure the public trust,” said Robert Brulle, an environmental sociologist at Drexel University.

The Cooler Heads Coalition formed in the late 1990s as mounting evidence of global warming began to fracture the industrial alliance that mobilized a decade earlier to downplay the threat of unfettered greenhouse gas emissions. A year before its merger with oil giant Mobil, Exxon gave $95,000 to the Competitive Enterprise Institute, the right-wing think tank where Ebell works, in a grant titled “Global Climate Change Program and other support,” according to documents published by the Climate Investigations Center.

Yet as the oil industry started distancing itself from widely debunked scientific contrarians, far-right philanthropists and dark-money groups stepped in to fund the Cooler Heads Coalition’s members. The financiers include the Donors Trust, Donors Capital Fund, and the foundations of the oil industrialist Scaife family, the manufacturing scion Bradley family and the Mercers, the Long Island hedge funders who backed President Donald Trump’s 2016 campaign.

That marked a shift from climate denial as a practical means of protecting carbon-polluting industries toward a new ideological fervor, enshrining opposition to climate science as a key part of anti-government dogma, said Riley Dunlap, a researcher and professor emeritus at Oklahoma State University who tracks climate denial groups.

“The Cooler Heads Coalition grew out of the frustration that industry was no longer opposing climate change as much as they thought,” Dunlap said. It’s “really a radical group of climate change deniers.”

The realities of climate change were clear to scientists even before rising seas started to inundate coastal cities like Miami on sunny days and extreme hurricanes and wildfires devastated Puerto Rico, California and Texas in recent years. At least 97% of peer-reviewed research concludes that emissions from burning fossil fuels, industrial farming and deforestation blanket the planet in gases that trap the sun’s heat in the atmosphere. A 2015 paper, meanwhile, found significant flaws in the methodologies, assumptions and analyses used by the 3% of scientists who concluded otherwise.

At 70%, the vast majority of Americans understand climate change is happening, and 57% recognize humans are the primary driver, according to polling data from the Yale Program on Climate Change Communication. In October, the United Nations released a dire report warning that, unless world governments slash emissions by nearly half over the next decade, the planet is projected to warm beyond 1.5 degrees Celsius, or 2.3 degrees Fahrenheit, causing about $54 trillion in damages and killing millions. A month later, the National Climate Assessment, a congressionally mandated report by scientists at 13 federal agencies, confirmed the findings.

In January, he said he was still on the fence about climate change, telling E&E News, “I’m trying to figure that out.”

“I’ve had a series of briefings with climate change experts to help me better understand this,” Wehrum told Reuters that same month. “Everybody is still exploring the science of climate change.”

A former corporate lawyer who lobbied on behalf of clients to weaken air pollution rules, Wehrum has ramped up those efforts since joining the EPA, becoming a chief architect of the Trump administration’s deregulatory agenda. He remains in close touch with his former law firm, according to The Washington Post.

“It’s not surprising that Wherum would have been featured at a Cooler Heads Coalition event,” Kert Davies, director of Climate Investigations Center, said by email. “He fits right in with the roster of climate deniers and other charlatans that Cooler Heads has hosted at events over the past two decades.”