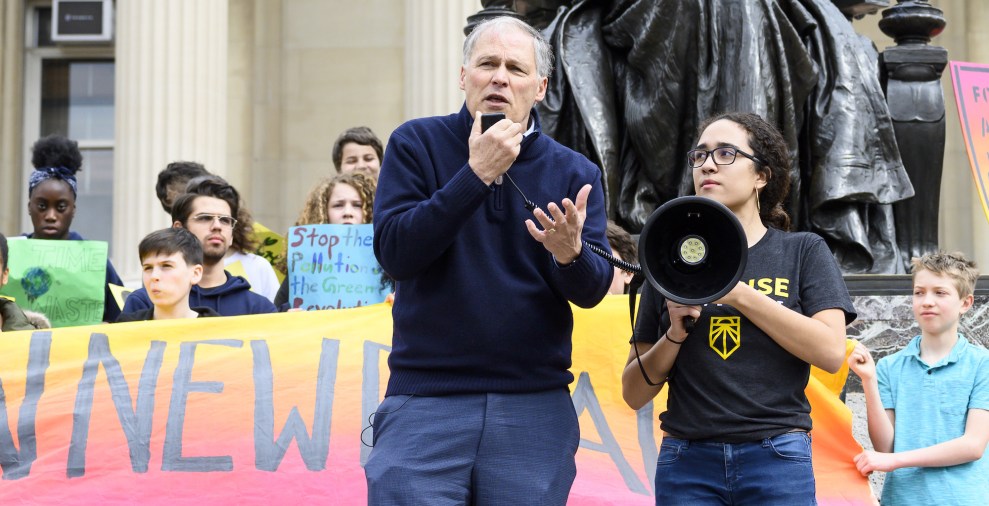 Washington Governor Jay Inslee says he won’t rule out participating in a primary debate on climate change, a move that—if he followed through—could risk his being barred from participating in the formal Democratic National Committee sponsored debates.

“I cannot rule out any other debate that would highlight both the necessity of defeating the climate crisis and calling for the candidates to step up to the plate,” Inslee said in an interview with Mother Jones on Thursday, while calling from the road in Seattle, Washington. “Sixty-second sound bites, which is all you’ll be able to get in a party debate, is grossly inadequate to the task.”

Inslee claimed the DNC is “trying to eliminate an opportunity to have a debate” by effectively “blacklisting candidates who want to have one.”

“You have to understand how constricted the opportunity for a full discussion for this will be when we’re talking about mobilizing and rebuilding the entire economy to decarbonize over the next couple decades,” he said. “You can’t describe the mobilization of the economy in 60-second sound bites.”

When asked about this matter, DNC spokesperson Xochitl Hinojosa replied, “It is the DNC’s job to organize the debate schedule, and the ground rules on unsanctioned debates were made clear with all the candidates, including Governor Inslee, and media partners months ago.” The DNC welcomes candidates to join issue-specific forums instead.

At the moment, there is no climate change debate scheduled, whether sanctioned by the DNC or not. But Sunrise Movement, the primary Green New Deal advocacy arm that is planning to protest outside the second debate in Detroit, told Mother Jones it is considering staging its own. “The American people deserve a climate debate,” Varshini Prakash said in a statement to Mother Jones. “If the DNC isn’t willing to put it on, we’ll consider organizing one ourselves.”

The progressive campaign to pressure the DNC to hold its first-ever sanctioned climate change debate first took shape in April. I originally reported that a number of groups, including Friends of the Earth, Credo Action, Greenpeace, Sunrise Movement, and 350.org, planned to ramp up the pressure on the DNC to finally devote the primetime opportunity to an issue that got short-shrift in the last cycle. Since then, about a dozen candidates, including Inslee, Bernie Sanders, Elizabeth Warren, and Beto O’Rourke have joined the call.

The DNC quickly shut down those hopes this week. According to Inslee’s campaign, the DNC called to tell him that not only would there would be no single-issue debates, anyone who chose to participate in such a debate would be denied the main stage.

“Today, my team received a call from the Democratic National Committee letting us know that they will not host a climate debate,” Inslee said in a statement this week. “Further, they explained that if we participated in anyone else’s climate debate, we will not be invited to future debates.”

The reaction to this announcement was swift and critical. On Twitter, Al Gore called it a “mistake to refuse to hold a #ClimateDebate.” Elizabeth Warren chimed in with her disappointment: “Gov. Inslee is exactly right. Climate change is the biggest challenge we face. Every candidate running for president should have a serious set of policies to address it, and should be eager to defend those proposals in a debate.”

Inslee and the climate activists angling for more debates will argue that climate change isn’t as singular a topic as the DNC claims. It is intrinsically linked to the economy and national security—both themes of past DNC-sanctioned debates. Despite that, climate continues to be treated more as a niche issue by major TV networks and party officials.

“The DNC has said they won’t hold a climate debate because climate change is just a single issue,” Prakash says. “Try telling that the families who can’t afford to rebuild after the Camp Fire in California, the farmers in Iowa whose crops have been destroyed by floods, or the black and brown babies in Detroit who can’t breathe. Climate change is not just a ‘single issue’—it’s an existential threat that impacts every aspect of our lives.”

In my April story previewing the grassroots campaign for a debate on climate, I explained:

The hyperpartisan nature of the climate debate tends to obscure the fact that there is a huge spectrum of proposed solutions for addressing the problem. “It’s like saying we shouldn’t have a debate on health care because all Democratic candidates agree more people should have access to health care,” says Evan Weber, political director of Sunrise Movement. In the past, when candidates are asked about this at all, the questions tend to be about whether a candidate believes in climate change, thinks of it as a priority, or has any plan for action.

Even now, it’s easy to imagine how candidates will express their commitment to a Green New Deal and deflect specifics with some applause line about climate change as an existential threat, a national security threat, or an opportunity to show American leadership. Moderately talented politicians could avoid addressing the challenges and paths forward on climate. For instance, beneath the generally universal enthusiasm for the Green New Deal, there are huge fractures about whether the traditional gold standard of a carbon tax championed by economists should be included, or how to handle nuclear power, or how to handle fracking and the continued leasing of lands for fossil fuels.

Inslee has met both the DNC’s polling and fundraising requirements to qualify for the first two debates that will be taking place in Miami and Detroit, though at roughly 1 percent he remains far behind in national polling. Since his campaign launch, he’s made a bet that his singular focus on elevating climate change will resonate with Democratic primary voters, telling me, “I am the only candidate—I repeat the only candidate—who has said unequivocally and forcefully that defeating climate change has to be the number one priority. You can’t solve climate change by just checking a box….Frankly, I’ve seen a lot of the candidates do just that.”