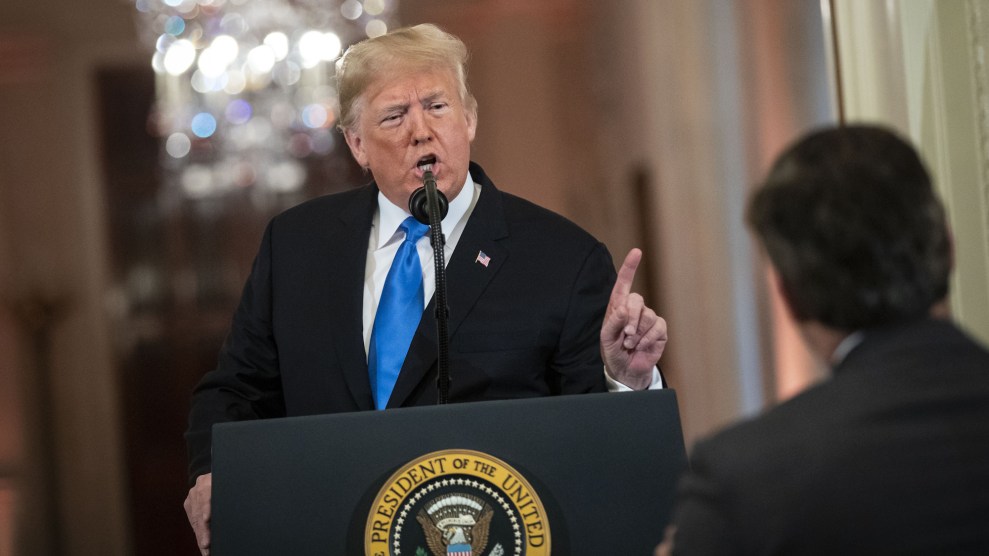 President Donald Trump will be delivering a speech on America’s environmental leadership on Monday afternoon, alongside EPA administrator Andrew Wheeler, in which he’s expected to tout how much he’s done for clean air and clean water. It’s an unusual subject for him to give a speech about—Axios called it a “Javanka Special”—given the many regulations his administration has ripped up in favor of industry lobbyists. His many environmental opponents have already pointed out how short the list of his environmental accomplishments really is.

Naturally, as an environmental reporter who works a few blocks from the White House, I requested press credentials to cover his speech. After a few days of silence, I received a generic email from the White House Press Office yesterday at 6:40 p.m. The subject line announced, “NOT Confirmed to Attend the Remarks on America’s Environmental Leadership,” a statement repeated in red letters at the top of the email. “Unfortunately, due to high interest and space constraints we cannot confirm you for tomorrow’s event and you are not credentialed to attend.”  I asked for additional comment but have not yet received the response.

In some ways, I suppose my getting shut out is not surprising, given that Mother Jones has been tough and critical in its coverage of the Trump administration. That’s our job.

But one strategy of Trump’s lengthy history in attacking the press—alongside briefly revoking a White House reporter’s press passes and repeatedly demonizing journalists and the publications we work for—has been to simply deny entry.

My colleague Pema Levy wrote about Trump’s informal blacklist during the 2016 campaign. “It seems that once Trump and his team have decided someone is not on the list, their word is just about final,” she observed.

The official and now familiar reason the Trump campaign gave to Pema was that the event was “well over capacity,” even while letting other journalists enter. Several Mother Jones reporters were barred from covering his campaign events in early 2016, joining quite a long and distinguished list of reporters and outlets the campaign seemed to deem unfriendly—including HuffPost, Politico, BuzzFeed, National Review, the New York Times. Trump admitted to the media black list in June 2016, when he posted on Facebook he’d revoke the press credentials of the “phony and dishonest” Washington Post.

This approach extends to the government agencies that have traditionally been covered by journalists. His political appointees have followed his lead by sometimes shutting out the beat reporters from covering federal agencies. The EPA has done this repeatedly with environmental reporters, admitting to removing a Washington Post reporter from its press lists—which I mysteriously disappeared from as well—and physically ejecting an AP reporter who was covering a conference devoted to discussing water-polluting chemicals known as PFAS.