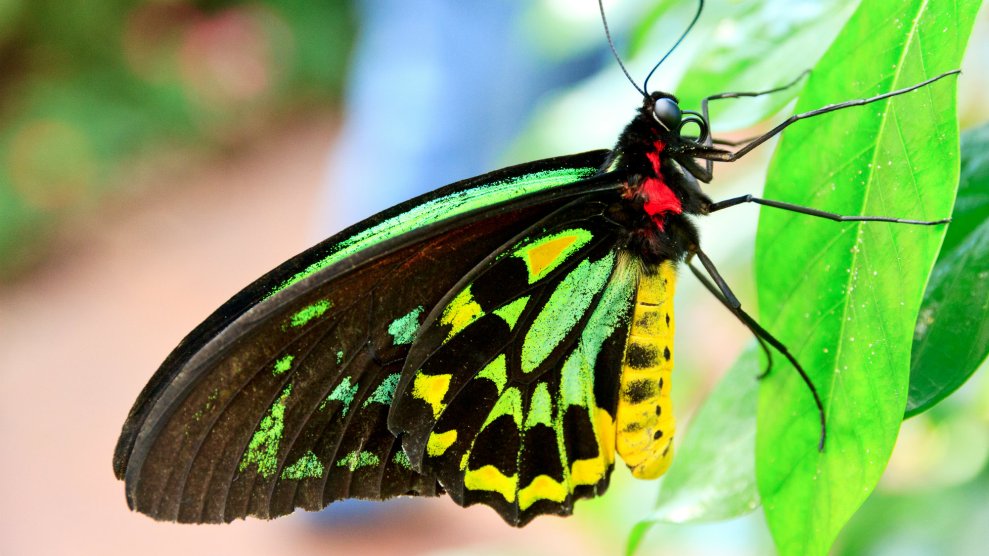 The world’s butterflies are under intense pressure from habitat destruction and other environmental threats, with many populations dwindling rapidly and others vanishing before our eyes. One recent study found an estimated 33 percent decline in common butterflies in Ohio from 1996 to 2016, a rate consistent with worldwide patterns. These losses have disturbing repercussions for crop pollination and the health of ecological systems.

In my quest to track down the world’s rarest species and explore the reasons for their dwindling numbers and what might be done to save them, I focused on North American butterflies, which are the closest to my home in Michigan but also emblematic of the worldwide crisis facing both butterfly and broader insect populations.

My search began in earnest 18 years ago with St. Francis’ Satyr, a butterfly on the verge of extinction whose population of roughly 3,000 is limited to a single army base in North Carolina. That’s such a tiny number that if one were to gather them all up and put them on a scale, they would weigh about a pound.

But other than a research project in Guatemala that I joined fresh out of college in 1992, I have never carried a net into tropical forests, home to the greatest diversity of butterfly species. And as a scientist, that’s a shame, because virtually nothing is known about the fate of tropical butterfly populations.

As I scoured the scientific literature and consulted with other researchers, I became captivated by one tropical species in particular: Ornithoptera alexandrae, known as Queen Alexandra’s Birdwing, which lives in the forests of Papua New Guinea.

It happens to be the world’s largest butterfly, with a wingspan of up to 12 inches. Its wings are adorned in iridescent blue-green and yellow. And its caterpillars are equally impressive, with large black bodies broken by a yellow saddle and long red spikes. Its stunning beauty, along with its habitat in a remote and mysterious location, compelled me to include it in my research, and make it a candidate for my list of the rarest butterflies.

The Queen Alexandra’s Birdwing was discovered in 1906 by British naturalist Albert Meek, whose 1913 book, “A Naturalist in Cannibal Land,” recounted his two decades of work in New Guinea. The primary targets of his research were butterflies, especially birdwing butterflies that have exceptionally long forewings and showy coloration, as well as birds of paradise, known for their elaborate mating rituals.

To immobilize large butterflies, indigenous people fashioned nets by lashing spiders’ webs around sticks. Meek had other methods. One day, he saw a large butterfly flying in the forest canopy out of reach of a net, so he took aim with a shotgun and blasted it out of the air. The resulting holes and rips in the wings of that first Queen Alexandra’s Birdwing specimen are on view today at the Natural History Museum in London.

For six decades following its discovery, no attempts were made to quantify the abundance of the Queen Alexandra’s Birdwing, though even then it was known to be rare and unique. In 1968, under the new Fauna Protection Ordinance put in place by the Australian government of Papua New Guinea (the country would gain its independence in 1975), its collection was made illegal.

In the 1970s, scientists finally began mapping the distribution of Queen Alexandra’s Birdwing, which was limited to two populations around the eastern city of Popondetta: one on the Popondetta Plain, the other to the south over a volcanic mountain on the Managalas Plateau.

In 1992, scientists encountered only around 150 in a 10-day period, and slightly lower numbers in the late 1990s. By the mid-2000s, other scientists observed even fewer individuals.

In 2008, conservation biologist Tyler Hicks spent three months searching for the Queen Alexandra’s Birdwing, and observed a mere 21 adults, and fewer than one butterfly per acre. If accurate, this estimate would undoubtedly make it one of the rarest butterflies in the world.

The greatest threat to the Queen Alexandra’s Birdwing is forest loss from tree harvesting, which has accelerated in recent years with the expansion of the palm oil industry.

Oil palm (Elaeis guineensis)—the fruit of which produces cooking oil, packaged foods, soaps, and more—transforms forests into uniform plantations. These plantations have grown to occupy thousands of acres in the core of the butterfly’s range and create a sterile environment, destroying the butterfly’s food supply and habitat and effectively eliminating any chance for its survival.

In most countries, conservation efforts could be furthered by buying up land parcels for stewardship by government agencies or non-profit organizations. In Papua New Guinea, however, tribal clans own and control nearly the entire country, with each clan working vigorously to protect its own land, which is defined by natural borders and is inherited by other clan members.

One potential solution is to encourage clans to harness the financial value of the Queen Alexandra’s Birdwing, which is further suffering from a continuing trade on the black market. Because of their beauty and rarity, butterflies that sold in the 1980s for up to $3,000 have more recently gone for a whopping $10,000 a pair. That sets it apart from other extremely rare species, which are of little comparative value.

To benefit from this value, clans would have to create habitat. By making small forest clearings to create the conditions required for native plants like the vines and flowers that feed the Queen Alexandra’s Birdwing to flourish, landowners could be incentivized to protect its future. And because new growth on vines attracts butterflies, it is easier to monitor their numbers and find their caterpillars. Chrysalises could then be placed into screened chambers until adults emerge.

By selling those butterflies to conservatories and museums, landowners who protect habitat for the Queen Alexandra’s Birdwing could be compensated for their efforts toward butterfly conservation (selling these butterflies, however, would only be possible after changes to international regulations). Global efforts to foster the farming of Queen Alexandra’s Birdwing are already underway, but these efforts will only succeed if the release of captive raised butterflies is coupled with dedicated and extensive habitat restoration.

It’s alarming that we know so little about the Queen Alexandra’s Birdwing and, for that matter, about the viability of other butterflies in remote tropical regions.

There is reliable population and habitat data for the North American butterflies I’ve highlighted in my work, and as a result they can be tallied and listed with some accuracy. But the Queen Alexandra’s Birdwing is so poorly studied that I’ve been unable to rank it relative to other rare species.

The sad truth is that this kind of neglect happens routinely among field researchers and conservationists working in the world’s most remote areas. The magnificent Queen Alexandra’s Birdwing is just one of hundreds of tropical butterflies that may be doomed by their obscurity.