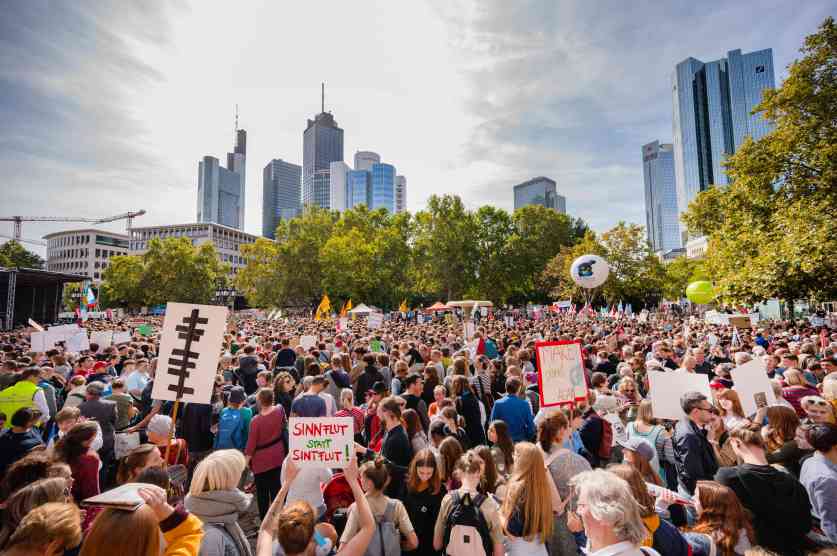 Protestors fill the streets of Frankfurt, Germany for the World Climate Strike.Andreas Arnold/Zuma

In a remarkable display of global collective action, hundreds of thousands of people around the world skipped school and work on Friday to protest the lack of meaningful governmental action against climate change.

The Global Climate Strike, a youth-led movement that has partnered with environmental organizations around the world, scheduled the strike to take place three days before the United Nations 2019 Climate Action Summit. The protests began in Australia, where an estimated 100,000 people marched in Melbourne, with 80,000 more marching in Sydney and 30,000 in Brisbane, CNN reports. As Friday dawned in time zones across the world, cities from Mumbai to Nairobi to Berlin joined in what is expected to be the largest day of climate demonstrations in history.

Greta Thunberg, the 16-year-old Swedish activist who first inspired students to skip school to protest climate change in August 2018, will join protestors in New York City, whose public school students were excused from class Friday and encouraged to join in the march.

These young people compose the first generation that bears little responsibility for the 410 parts per million concentration of carbon in the atmosphere, but will face most of the consequences from it. They’re coming of age when the window to ward off this nightmare scenario is rapidly shrinking. Many older adults have been warning for decades that “future generations” will suffer for our selfishness and inertia from continued inaction. Now, those so-called future victims are finding their voice to try and shape the agenda.

Friday’s Global Climate Strike, an extension of students’ Fridays for Future strikes around the world, is one result of the “future victims” finding their voice.

We will keep sharing images as the day unfolds:

This is the NYC Climate Strike. Foley Square is overflowing.

who made this it is MAGNIFICENT pic.twitter.com/s2KsXqgLdb

OMG the #ClimateStrike is SO big in Melbourne. Crowd estimates coming in at 100k! pic.twitter.com/UpnQHVoB2r

#children of #mumbai are demanding for #ClimateJustice on the streets! It's now or never.. #ClimateAction is needed.. let's #actnow .. for a safe future for all of us..#GlobalClimateStrike @GretaThunberg @FFFIndia @350 @greenpeaceindia pic.twitter.com/dDkB8ZX2hW

An estimated 100,000 people in Berlin on #ClimateStrike. Today is massive pic.twitter.com/kSS7NulTx0

This is an incredible visual. pic.twitter.com/cTUyCmC8IY

It's a pleasant scene here on the streets of Nairobi. People walked out of their offices & homes to support the #GlobalClimateStrike & fight for the future. #ClimateStrikeKE now on Harambee Avenue chanting #ClimateJusticeNow #deCOALonize pic.twitter.com/rNacFqP5Xj

We are all connected. pic.twitter.com/KjBPJMzyOp

Huge crowds at the Islamabad #ClimateMarch. There is suddenly a climate movement in Pakistan. #ClimateActionNow pic.twitter.com/jp9jHusiAL

And everyone started taking to the streets in #Paris for the #globalclimatestrike #fridaysforfuture #20septembre #YouthStrike4Climate pic.twitter.com/Wmb3QOXoRI