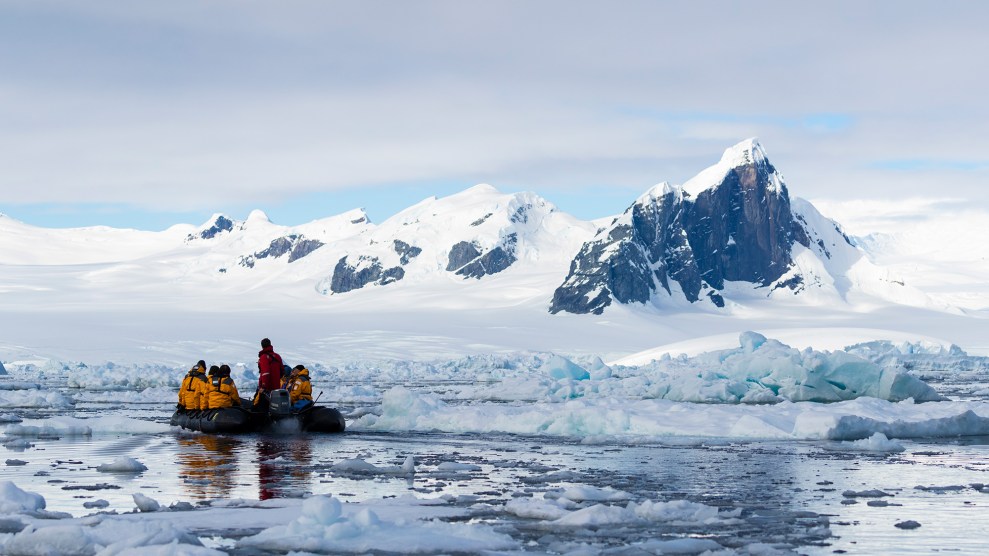 Travel is terrible for the environment, particularly if it is by plane. It’s such “a major contributor to ecocide,” that it had one travel writer vowing in The Atlantic to “cherish my own home turf more.” As concern about climate change reaches a fever pitch (finally), we’re finally realizing we might need to balance seeing the world with preserving it. What does this mean if you are a company whose very existence depends on users being tempted around the globe by … a lakeside one-bedroom in Italy, a cabana in Colombia, a yurt in France? All are vacation rentals that Airbnb served up to me when I recently browsed the home page—which also included a large banner advertising “the Antarctic Sabbatical.”

Welcome to Airbnb’s glitzy, greenwashing PR stunt: In December, the vacation rental platform will send five lucky volunteer “citizen scientists” to the desolate continent for 10 days. There, according to an online brochure featuring animations of chilly remote landscapes, they’ll explore an icefall, ride fat bikes with wide tires to grip the frozen terrain, and collect samples of snow. It’s these snow samples that are ostensibly the point of this scientific journey: They will be later analyzed, with help from real scientists, for signs of microplastics. Airbnb doesn’t list the price tag of the trip, which it is footing, but for reference a seven-day trip organized by Antarctic Logistics and Expeditions, the tour company Airbnb is working with costs $26,000 a person. After the trip, the volunteers will “work with Ocean Conservancy to become ambassadors for protecting the oceans, sharing with the world how others can help minimize their collective plastic footprint and act as stewards to our planet.” Conveniently, the volunteers will also be de facto ambassadors for Airbnb, as Caroline Haskins pointed out in Vice, as well as ALE (which advertises the trip on their site), and the entire concept of trekking to far-flung locales.

The Antarctic trip is the second trip in Airbnb’s “sabbatical” program; over the summer, the company sent five volunteers to “save the Italian village of Grottole” (i.e., drum up tourism interest and therefore economic growth). The line that Airbnb is telling reporters (Haskins, me) is that it hopes to show how travel can be a “positive catalyst for change.” Airbnb is not, as a spokeswoman emphasized to me, trying to expand its services into Antarctica, nor is it intending to encourage people to travel there, as was the case with the Grottole trip. The goal here, ostensibly, is science.

So, can this trip produce good science? Melanie Bergmann, a marine ecologist whose work charts how microscopic bits of plastic make their way through the atmosphere to faraway locations, wrote to me in an email that it’s difficult to say without knowing more about the particulars. It’s certainly possible for ordinary folk to help with collecting microplastic samples, as Airbnb intends participants to: Bergmann and her team had regular people living on a Norwegian archipelago pack up snow samples for a study themselves. The main challenge there was ensuring they did so in a way that wouldn’t further contaminate the snow; the lab provided pre-rinsed plastic containers.

“The last thing that Antarctica needs right now is more people going down there.”

Airbnb is partnering with a scientist for the trip: Kirstie Jones-Williams, a graduate student at the University of Exeter, is taking time off from her Ph.D. program to lead the trip along with Antarctic Logistics and Expeditions. They’ll be staying at Union Glacier Camp, ALE’s main hub for tourist trips. There will be two opportunities for data collection, Jones-Williams explained via email: one at the camp to understand its footprint, and again at various locations on the glacier, “places where we would not expect to find microplastics.” Though the trip includes several excursions to common tourist destinations like the Elephant’s Head and Charles Peak Windscoop, “This trip couldn’t be further from a tourist trip!” Jones-Williams wrote, noting that “the more our volunteers learn about this unique environment,” the more they will be motivated to tell people about what they learned on the trip.

It’s the same talking point of travel: “a positive catalyst for change”! I should point out that I was not allowed to email Jones-Williams directly. When I reached out to her, a PR person responded on her behalf. I sent her questions to send to Jones-Williams, and in turn, I received replies from Jones-Williams via the spokesperson. Jones-Williams plans to submit the results in a peer-reviewed paper—presumably with additional review by Airbnb and ALE—emphasizing that this is all typical of citizen science projects.

It’s not a typical citizen science project, which is often designed to widen the number of people (and their computers, binoculars, and other common tools) that can contribute to data collection and processing. They center around seeking out people who are already advantageously placed, as Bergmann did in asking folks who lived in Norway for snow samples, rather than hauling them across the ocean to put yet more footprints in a fragile ecosystem. Airbnb’s efforts are, instead, a company co-opting and twisting the notion of citizen science in order to use science (even perhaps a little real science!) to sell its mission and product. “The last thing that Antarctica needs right now is more people going down there,” says Jessica Green, who studies the politics of climate change at the University of Toronto. She sees tourism as one of the biggest threats to the continent. “Putting forth the idea that just anyone can go is not very helpful.”

Here are some alternate ideas of how Airbnb could straightforwardly support science: providing a research grant, sponsoring a scientist’s fare, even partnering with ALE to have folks already on tour in Antarctica do data collection. Or just asking scientists what they need and supplying that. “You need quite fancy technology to actually find the microplastics,” Bergmann explains. The hard work of analysis once you return to the lab “is the bottleneck, not getting the samples.”