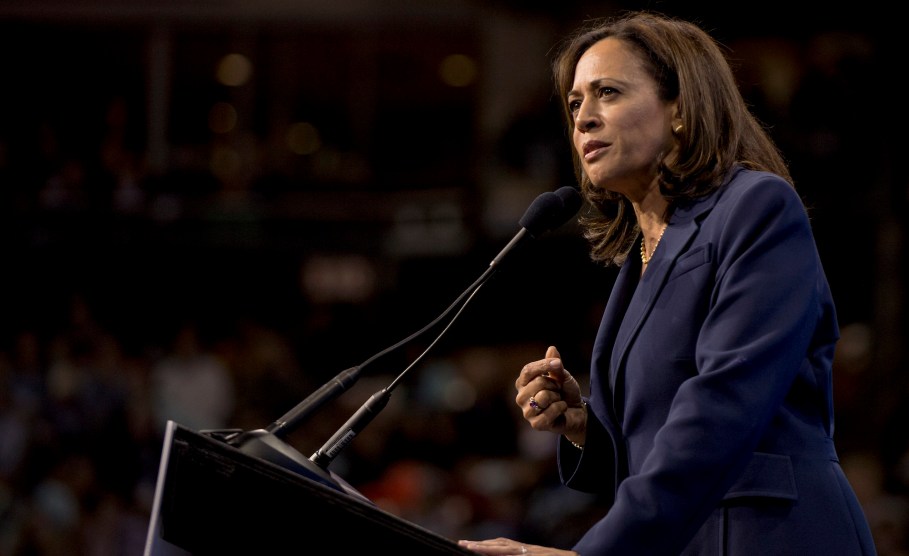 California Senator and 2020 Democratic presidential hopeful Kamala Harris believes the next commander in chief should hold fossil fuel companies accountable for misleading the public about climate change—and she wants to  use the full force of the federal government to do so. In an exclusive interview with Mother Jones last week in Dubuque, Iowa, she promised to mobilize the Department of Justice and the EPA to ensure “that we’re going to put pressure on the big companies to do what is required and what is responsible.”

“We’re going to put pressure on the big companies to do what is required and what is responsible.”

Asked if the federal government should play a role in investigating fossil fuel companies, Harris said “absolutely,” adding “let’s get them not only in the pocket book, but let’s make sure there are severe and serious penalties for their behaviors.”

One of those companies, Harris suggested, could be California’s largest utility, Pacific Gas & Electric (PG&E). Earlier this month, PG&E cut the power to an estimated two million people in an effort to minimize its chances of causing a catastrophic fire; last year’s Camp Fire killed 86 people and tipped PG&E into bankruptcy. In recent years, PG&E has invested heavily in renewables, but from 1989 to 1991, the utility was part of the campaign to delay and derail climate action through the Global Climate Coalition, a group of industry groups that worked to delay and derail regulation through 2002.

This was the first time Harris has weighed in on the utility’s role after power shut-offs in her home state. In the climate plan she released in September, she promised to flip the switch on Trump-era environmental rollbacks, then implement her own brand of the Green New Deal, a $10 trillion investment plan to equip the country for a carbon-neutral future—she hopes by 2045.

The senator has a less substantial environmental record than some opponents—most notably Bernie Sanders—but she has spoken out about the importance of cleaning up pollution in poor communities. Her Climate Equity Act would assign a score to bills and regulations that judges their impacts on vulnerable places.

Harris has also been sure to emphasize her experience as a prosecutor, when she oversaw the California Department of Justice. From 2011 to 2017, her office sued several major oil and gas companies for pollution. But last month, during a climate change town hall, Harris claimed to have directed the California Attorney General’s office to sue Exxon Mobil in 2016 for misleading the public about the dangers of climate change. In fact, the department only opened an investigation that eventually went nowhere.

The litigation over climate denial and who bears responsibility is still an open question: Exxon is currently on trial in the New York Supreme Court over whether it misled shareholders over climate change impacts, and the Supreme Court will allow the city of Baltimore’s case against major oil companies to proceed in state court. These cases and others could persist well into the next administration.

And for that reason, Harris says that she will choose her cabinet members in part based on their commitment to fighting climate change—even for positions outside the EPA. “The president of the United States gets to appoint her cabinet,” she says. “And for me this issue of the climate crisis relates to every aspect of what we do.”