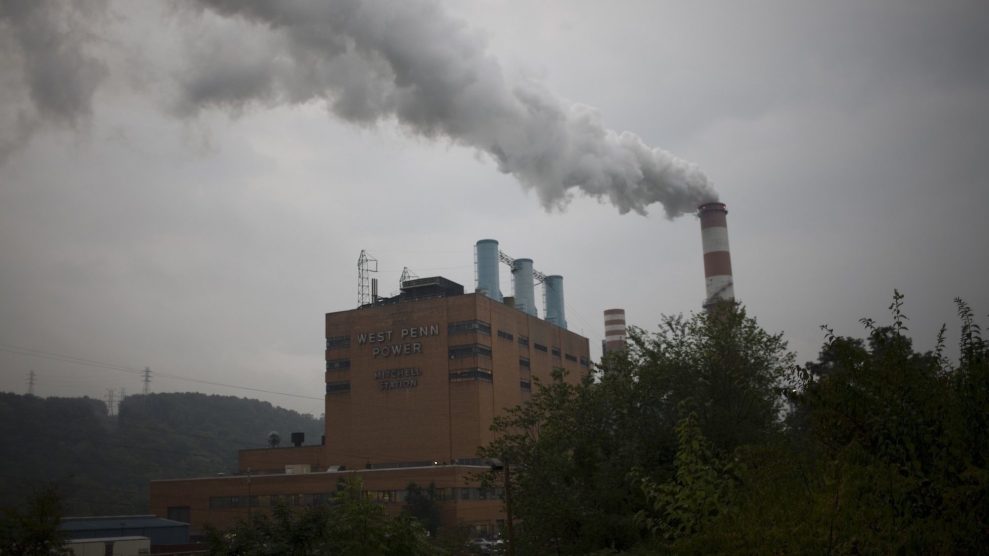 The 450MW West Penn's Mitchell Power Station sits on the bank of the Monongahela River in Courtney, Pennsylvania.Robert Nickelsberg/Getty

Renewable energy is taking up more of the United States’ power grid, and despite the best efforts of the Trump administration, the days of coal’s dominance appear to be numbered. Nonetheless, the administration continues to try and reverse the industry’s decline and crisis of solvency by enacting policies as if fossil fuels were the still an engine of America’s economic future. This week brought another example: The EPA announced plans to loosen two Obama-era rules that dictate how coal-burning power plants should dispose of their toxic waste, known as coal ash. A typical plant produces more than 125,000 tons of coal ash every year.

The proposal would unravel previous guidelines in two ways: First, by easing regulations on what pollutants coal plants can dump, and then by changing the standards for the containment systems they dump that waste into. Both changes largely involve delaying deadlines for coal mines to reach regulatory compliance. Larissa Liebmann, an attorney with the clean water advocacy group Waterkeeper Alliance points out that plants are getting two additional years to cut down on some waste waters they produce, and other filtration requirements would become completely voluntary. As for waste storage, coal companies could have up to eight years to line their storage ponds with material approved under regulatory guidelines, a jump from 2020 to 2028.

Under the new proposal, companies will have to stop placing coal ash into unlined storage ponds near waterways by Aug. 31, 2020, and either retrofit these sites to make them more secure or begin to close them. Unlike the Obama-era rules, the EPA will allow greater leeway and more time for operators to request extensions ranging from 90 days to three years, until Oct. 15, 2023, if they can convince regulators that they need more time to properly dispose of the waste.

Moreover, if a company can demonstrate it is shutting down a coal boiler, it can petition to keep its storage ponds open for as long as eight years, depending on their size. Slurry ponds smaller than 40 acres could get approval to stay in place until Oct. 15, 2023, officials said, while larger ones could remain open until Oct. 15, 2028.

This rule change trades away increased costs for the coal companies for higher toxic chemical exposure in communities from the groundwater near coal-burning plants. By giving fossil fuels companies longer to act, more contaminants will inevitably be released into the environment.  Liebmann, who was disappointed but not surprised by the new ruling, says this foot-dragging simply reveals how the administration prioritizes its constituents.

“The administration put coal ahead of the public’s health and the health of our waterways,” she says. “We think these moves will put communities at risk from the toxic pollutants of coal ash, and it’s doing it to save coal companies’ money.”

“We think these moves will put communities at risk from the toxic pollutants of coal ash, and it’s doing it to save coal companies’ money.”

She notes that of all those toxic pollutants—which include arsenic, lead, and mercury—selenium is the most serious. It’s a byproduct of coal ash that can cause neurological problems, paralysis, and even death when ingested in high amounts. As part of a 2010 report from Physicians for Social Responsibility and Earth Justice, scientists collected drinking water samples collected near coal ash containment sites. Some had selenium levels that were sometimes 580 times higher than the federal drinking water standard.

“Rollbacks will result in more selenium discharges,” she says, “so that’s one thing we’re looking at right now.”

The irony here is that, in part, the move by the EPA is the result of a 2018 court victory by climate activists. In 2015, when the EPA rewrote a number of guidelines on coal ash ponds—a common vessel to store coal plan runoff—the coal industry and environmental advocacy groups quickly took the EPA the court; the former argued the new rules went too far, the latter said they didn’t go far enough. The EPA rules had allowed coal ash ponds to use a clay-based lining, which was questionably effective. In some cases, ponds could go without lining at all. Environmental groups suggested this threatened public health and the environment.

In August of last year, the U.S. Court of Appeals for the District of Columbia Circuit agreed. The court ordered coal companies to alter their facilities to meet the court-ordered standards, or shut down. In part, this new EPA plan is designed to provide coal companies a more generous window for meeting those deadlines. Liebmann says that the new deadlines the EPA is giving bad actors undoes any sense of victory activists once enjoyed. This is compounded by the fact that the overwhelming majority of coal ash ponds already contaminate the surrounding groundwater. And the worst offenders now have much more time to continue doing so.

“The industry often benefits from EPA dragging its feet on these things,” she says, “and on that, it has a lot of leeway to do so.”